Austin at Large: And Unto Us, a Code Is Born 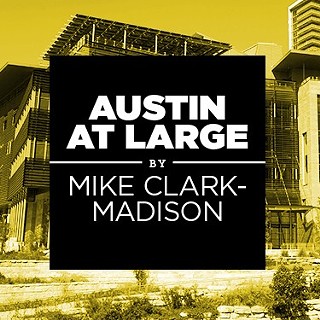 As I'm writing this, your friendly neighborhood Chronicle is watching the long, labored delivery of Austin's new Land Development Code, with which City Hall has been pregnant for oh so very long. It's clearly a momentous occasion. Did we do enough to prepare? Is the room ready? Are we ready? Can't we slow this down? People are nervous, and exhausted, and scared even if they are also excited. You know, just like birth in real life.

City Hall is groaning in travail, as St. Paul would put it, at this new creation – not of a new code, but of the new city the code prescribes and promises. Those labor pains, to be fair, have been going on for a while – with the new code, with the Imagine Austin Com­prehensive Plan that preceded it, and with the 10-1 transformation that accompanied it. It's been a decade filled with groaning (Imagine Austin kicked off in 2009), which would not have been sustained so long or consumed so much energy if we were just groaning over the arcane rules, regulations, and processes of government. Austin is Weird, but not that Weird.

Prepare Ye the Way of the Weird

It's not that provocative anymore to describe these travails as a contest for the soul of the city, or a competition to see who owns Austin's future. Of course it's about power, which is why the road to a modern land use code had to run through 10-1, as Austin redistributed its political power. The fact that 10-1 begat a Council that's now split 7-4 in favor of a land use code that is strenuously opposed by the people who brought you 10-1 is ironic, given that both were conceived as ways to make Austin more democratic and equitable, with options and choices and opportunities for people who lacked them, or were denied them, before.

Is it a problem that it took Austin a whole decade to figure out how to adapt to a future that’s already here?

The climax of that contest came a year ago, when Steve Adler won reelection in a landslide and the effort to kill Baby ATX LDC CodeNEXT Jesus failed at the ballot box. We have since then pretended to forge a consensus path forward, while actually trying to create a pathway for the losing side to climb down in dignified retreat. (Prepare ye the way of the Weird!) There are still details, major ones, to be worked out in 2020 before Council approves the code on third and final reading. But there are few minds to be changed at this point, this week, as we've finally arrived at the threshold of what comes next.

Is it a problem that it took Austin a whole decade to figure out how to adapt to a future that is already here? Many would say yes, bitterly so, and for reasons that are shared by both sides of the LDC struggle, "horseshoe theory" on a local scale. Both urbanist agitators, who think Austin is too beholden to its bougie boomer homeowners, and neighborhood resistance fighters, who think our streets are flooded with trendy hipster bullshit, see the last 10 years as rife with opportunity costs and wasted promises; Austin could have been different and better but lost its chance because we just muddled through instead of sacking up and making tough choices about who we wanted to be.

There are two counterpoints to this confluence of groaning. One is that Austin's future has always already been here, and we have not suffered for it. Our city has literally grown inexorably and faster-than-most for almost its entire existence. For much of that time – from Sam Houston's day to the year 2000 – population growth was accompanied, roughly but consistently, by increasing land area. It's only since Austin has begun to face direct and indirect physical constraints – largely a lack of road and water infrastructure, accompanied by environmental sensitivities – that we've slowly became pragmatic about land use, because now physical space in our city comes with a price tag. Since nature does not evolve toward goals, but away from constraints, the present moment may be one that could not have happened even a decade ago.

The other is that Austin still has plenty of chances, precisely because we've done a better job at distributing our power. One of the truly tragic and maddening facets of the decline of places like San Francisco is that all the money and influence and stroke piles up on one side. (There, it happens to be the NIMBY side, as it is in a lot of modern rich America, but that's not inherent.) Here, we have a genuine push-and-pull over these issues; 7-4 is a definitive result, but it's not a landslide. In 2020, five Council seats will be up for election, three on the winning side of this vote, two on the other. Things can change.

More hearteningly, people with power on both sides have a genuine commitment to those values of democracy and equity that got us here via both 10-1 and the new LDC. There are many places in America where people do not spend a decade fighting to own the future because those places simply do not have a future worth caring about. Austin does, which is why people move here. Maybe now they can find a place to live.