The Kind Clinic's Chief Medical Officer Dr. Cynthia Brinson received the Texas Academy of Family Phy­sic­ians' Public Health Award earlier this month for her careerlong work addressing the local HIV epidemic. The award, which was given to Brinson during the TAFP's Annual Session and Primary Care Summit, recognizes individuals who've made "extraordinary contributions" to the state's public health.

Brinson has been helping people living with HIV/AIDS in Central Texas – as well as researching the virus and its treatments – for over 30 years. She was one of several local doctors asked to join the American Foundation for AIDS Research in the late Eighties, which brought clinical drug trials to town. By 1992, the good doctor helped form the HIV Study Group at Blackstock Family Health Center. Today, that group is known as Central Texas Clinical Research and continues to act as a community-based clinical research organization.

For the past five years, Brinson has also been a tireless advocate for PrEP, the medication that – when taken daily – is 99% effective in blocking the transmission of HIV. In late 2014, before the Kind Clinic became what it is today, it operated as a pop-up clinic known as Austin PrEP Access Project, where Brinson was one of several doctors donating their time to aid APAP ­clients. In 2017, she helped Texas Health Action open Kind Clinic, which is today a full-service sexual health and wellness clinic that also offers gender affirming care. According to the press release, Kind has provided "risk reduction service for approximately 25,000 members of the community." Now, Brinson is set to become a mentor for the newly created HIV Distinction Track within the UT Dell Medical School residency program, where she'll train the "next generation of family doctors to promote public health through infectious disease prevention, screening, and treatment." 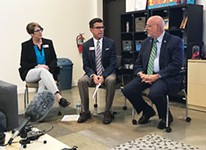 Ending HIV in 10 Years: How Do We Do It?
CDC director visits Austin, calls for a "disruptively innovative" plan