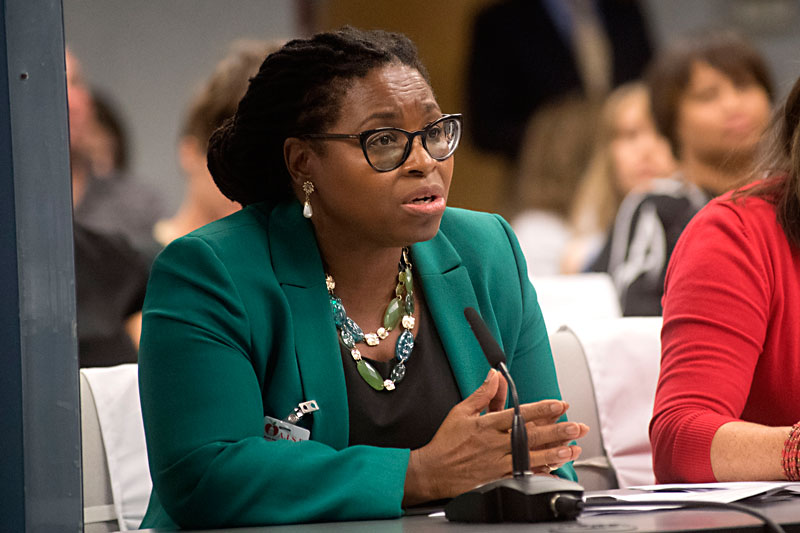 As the dust begins to settle following a Nov. 18 vote by the board of trustees of the Austin Independent School District to close four elementary schools and implement a host of districtwide initiatives, community members are reacting with grief, anger, and – above all – a desire to prevent what they consider inequitable school closures from happening in the future.

Lingering questions over a report from district Equity Officer Stephanie Hawley are fueling the frustration from community members. Last week, before the board voted, a district spokesperson told the Chronicle that Hawley's report, which looks at the impact of the school closures, was mostly complete, but undergoing edits and revisions from other district staff and could not be released until that work was completed. By Friday, Nov. 22, the report was still in draft form, and an estimated time of release remains unclear.

Equity Officer Stephanie Hawley said she tried for weeks to meet with AISD Superintendent Paul Cruz to discuss what she was learning about the impact the closures could have, but was not afforded the time.

It appears Hawley repeatedly tried to share with top district leaders her concerns about inequities in the School Changes plan, including through the report, but she was not given the opportunity to do so. Ultimately, those concerns came out anyway, in Hawley's explosive assessment delivered to the school board just hours before they voted on the measure, in a statement that bewildered the staff and trustees present to hear it.

In communications with community leaders obtained by the Chronicle, Hawley said she tried for weeks to meet with AISD Superintendent Paul Cruz to discuss what she was learning about the impact the closures could have, but was not afforded the time. Hawley also wanted to present her findings to the board at a public meeting, but no such staff presentation was ever scheduled. Hawley has not spoken publicly about the school closures or her equity report as of press time, Nov. 26, but her Twitter feed since the board voted offers additional clues to her state of mind.

"When we educ[ation] leaders of color are lured into the sunken place to make racist decisions, children of color are harmed," she tweeted on Nov. 25, invoking a concept from Jordan Peele's 2017 horror masterpiece, Get Out. Before that, she shared an Education Week story headlined "The Challenging, Often Isolating Work of School District Chief Equity Officers," and most tellingly, on Nov. 19, the day after the board vote, she retweeted a quote from Martin Luther King Jr. that reads: "There comes a time when silence is betrayal."

In response to questions about Hawley's frustrated efforts to meet with Cruz, the district responded: "Dr. Hawley and Dr. Cruz have begun meeting more frequently and have established a recurring meeting schedule." That will provide little solace to community members who clamored for the report to be released before the board took action to close schools. The situation also validates concerns long expressed by Eastside education activists that hiring an equity officer wouldn't mean much if the district prevented the person from playing a meaningful role in planning decisions.

Already, some frustrated by the board's vote are looking ahead to 2020, when four trustees – all but one of whom voted in favor of the school closures – are up for reelection. District 3 Trustee Ann Teich, who voted against the proposals, told the Chron­icle she would not seek another term for the unpaid position, and Kevin Foster, a professor at UT and one of the leading critics of the district's plan, has toyed with the idea of running for Teich's seat. As of press time, he remained undecided. (The 2020 filing period for AISD Trustees opens July 18 and closes on Aug. 17.)

The district now faces the directed energies of parents focused on the next phase of the School Changes effort, which could lead to the closure of an additional eight schools for which AISD opted to defer a final decision earlier this year. The district is set to begin community dialogue with schools that could be impacted – Ridgetop, Maple­wood, Dawson, Joslin, and Pecan Springs elementary schools, and Webb and Bertha Sadler Means middle schools – in early 2020, to determine if closure and consolidation is the right solution.

Meanwhile, at the four schools to be closed as a result of this month's vote – Metz, Pease, Sims, and Brooke elementaries – "School Changes Implementation Teams" will be formed to work through how the consolidations can be carried out in ways that are least disruptive to students. The district will also conduct feasibility studies of each site to determine how the closed campus can be repurposed into a new community asset.

For many parents, though, AISD will have to undertake significant effort to rebuild trust and foster confidence in its School Changes plan. Like many parents engaged in the fight to keep their schools from being closed, Rose Guajardo, a parent at Pease, is ready to keep up the pressure on behalf of marginalized groups. "My reaction to the board vote has been complete activism," Guajardo told us. "It really opened my eyes to the inequities in AISD, and I intend to help change that."