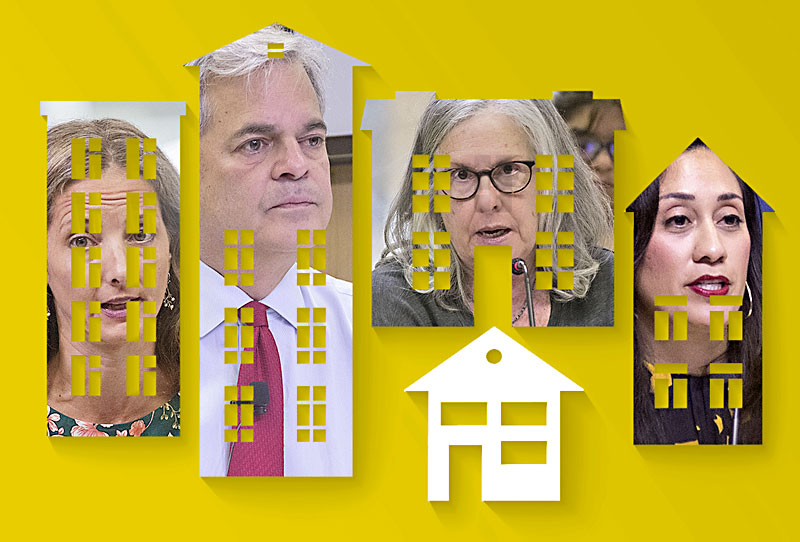 City Council met Monday, Nov. 18, to discuss the Land Development Code revision and offer recommendations to staff as it works on its second supplemental report on the code, to be released Monday, Nov. 25.

The most startling recommendation came from Mayor Steve Adler: What if we allowed triplexes throughout the city, by right? After suggesting that three housing units be allowed on every residential lot, Adler acknowledged the late-in-the-game curveball would be unexpected – and maybe undoable. "I don't know how crazy an idea that would be," he told staff, "because I haven't looked at it at all, but I just throw that out there because I hadn't heard anybody suggest that simplicity."

Simple, yes, but it's also the kind of blanket upzoning that city leaders have shied away from as a way to ease fears among some council members and the neighborhoods they represent. The LDC rewrite will allow more housing, Adler and others have said previously, but not in a way that dramatically alters "neighborhood character." But even more surprising than Adler's suggestion of R3 zoning everywhere was the interest in the idea expressed by CMs Kathie Tovo and Leslie Pool, two of the leading voices – generally in opposition to Adler – urging caution in how the new code achieves housing density.

"I'm interested in thinking about that kind of approach," Tovo said, because it would encourage "invisible density," especially in areas currently proposed to be zoned to allow a minimum of six units per lot (RM1) by right. With R3 zoning, property owners could retain an existing house-like structure at the front of a lot and build two additional housing units behind it, preserving the look of the neighborhood while growing its housing capacity.

But some CMs seem concerned that the offer of R3 everywhere might be used in a compromise to reduce upzoning in Transition Areas – sections of the zoning map that serve as house-scale buffers between high-density corridor development and established mid- to low-density neighborhoods. Mayor Pro Tem Delia Garza indicated she supported Adler's suggestion, but not if it meant downzoning along corridors in the Transit Priority Network.

She reminded her colleagues that one of the city's major goals over the next 20 years (as outlined in the Austin Strategic Mobil­ity Plan) is to achieve a 50-50 split between commuters driving alone and those using other modes, and "the whole purpose of ... this kind of intensity along corridors is to put people closer to transit. ... I don't want staff to waste time going to see what R3 everywhere would do, because that is not what we were trying to do, ever."

On the Council message board, where CMs have begun sharing ideas they want colleagues and staff to consider ahead of the scheduled Dec. 9 first-reading vote on the LDC rewrite, CM Natasha Harper-Madison echoed Garza, adding that the ASMP 50-50 mode-split goal is not just to reduce traffic headaches but also to fight climate change. The new code should incentivize infill development as a way of putting people closer to jobs, retail, and other services, because "Austin's outdated, car-centric land development code, coupled with our rapid growth, has exacerbated sprawl, forcing many residents to take on long commutes," she wrote Tuesday, Nov. 19. She added that climate research suggests infill development "can reduce greenhouse gas pollution more effectively than any other option, including electric cars."

City Council unanimously approved $8 million for the purchase and renovation of the Rodeway Inn at Oltorf and I-35 to serve as a temporary bridge and permanent supportive housing for those now homeless and unsheltered. The motel has 87 rooms, a few of which will be used as office space for caseworkers on-site; the Ending Commun­ity Homelessness Coalition, which will help operate the facility, expects to help hundreds of people move into and out of the site and to independent stable housing. ECHO Executive Director Matt Mollica has experience running similar facilities for Denver's homelessness agency, which offers an appealing approach to housing the unhoused: Hotels can be brought online quickly and at a lower cost than buildings that need to be converted from other uses and are priced to reflect those uses, let alone building housing from the ground up. One example: the proposed South Austin Housing Center on Ben White Boulevard, an office building that Council had voted in June to buy for $8 million, excluding any conversion or renovation costs, a plan that's now been superseded by the Rodeway Inn.

Council also directed staff to evaluate funding mechanisms for two new stations on the Capital MetroRail Red Line, both near the Domain – one at the Broadmoor development emerging at the former IBM campus, and another at McKalla Place, future home of the Austin FC stadium. While Council broadly supported an expansion of rail service, several CMs urged against focusing on just one portion of the city's overall mobility network. "I don't want to think about the Red Line in isolation," CM Greg Casar said, "just like I don't want to think about the Orange or Blue line in isolation," referring to the high-capacity transit routes through city central being examined by the city and Cap Metro's Project Connect planning effort.

Also, Rainey Street will have a new fund used to promote its history as a Mexican Amer­ican cultural district. The fund will collect development fees, alley vacating proceeds, and revenues from right-of-way closures within the district for projects that "enhance placemaking, promote cultural vibrancy, and celebrate the Mexican American identity, heritage, and history of the Rainey Street Historic District," according to the approved resolution. The fund will be capped at collecting no more than $200,000 annually, as some CMs didn't want to shortchange similar projects elsewhere in the city. The fund is an effort to make good on Council direction from back in 2013; due to a staff misunderstanding, the special district created back then lapsed after only one year.