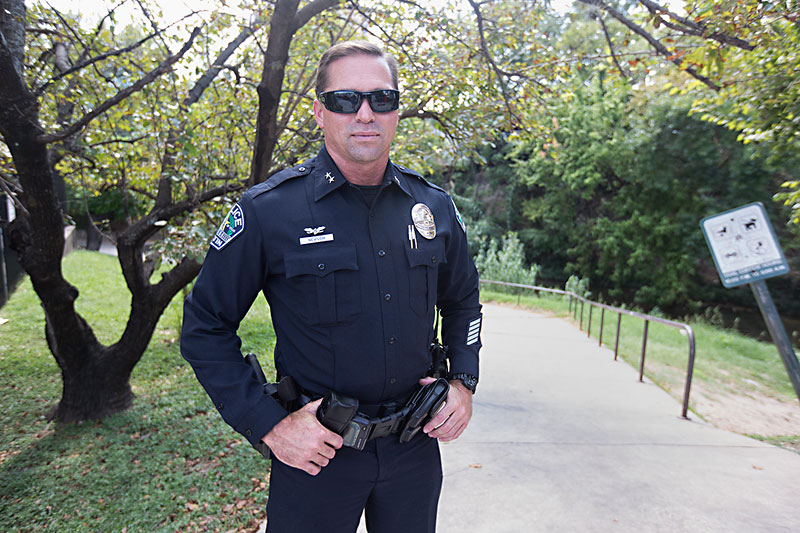 In response, City Manager Spencer Cronk hopes to hire a third-party investigator as early as the end of this week to look into the matter. Especially troubling is an allegation that Police Chief Brian Manley and other assistant chiefs knew of Newsom's use of racist language, but did not act on the information. In an email to City Council announcing the investigation, Cronk wrote, "Racist language, slurs, intolerance, and derogatory behaviors are completely unacceptable in our community. I am saddened to have received these anonymous allegations, and I intend to fully understand if there is any truth to them. If there is, I will take appropriate action."

In a statement sent to several media outlets, Newsom said he didn't specifically remember making the comments outlined in the complaint, but acknowledged "using inappropriate language in private conversations with friends," and added, "Despite using poor judgment, I hope my 23-year career as a police officer who treated everyone with dignity and respect will reflect my best intentions to serve this city."

At a City Hall press conference on Friday, Nov. 8, CM Natasha Harper-Madison and social justice activists addressed the allegations. Harper-Madison described the language allegedly used by Newsom as "disturbing and repugnant," but for her and activists reacting to the news, the allegation could reflect a broader problem within APD: a culture that not only tolerates but seeks to cover up the derogatory views. "Who knew what, and when did they know it" will be at the heart of the third-party investigation, Harper-Madison said. Austin Justice Coalition founder Chas Moore and other activists prepared a list of action items they hope city leaders will act on to find out how deep the problem goes. "When racism is tolerated at the top levels of the department, that tolerance is going to allow racism to fester at every level," reads a memo co-authored by Moore and sent to Cronk, Mayor Steve Adler, and the Council.

At the top of the list, activists want the city to conduct a "department-wide audit of social media communications" – like those completed by the Plain View Project in Philadelphia, Dallas, and Phoenix – to uncover other uses of derogatory language within the department. Advocates believe this will be the most critical step the city can take, because it will give the community a clear picture of the scope of the problem; from there, specific policies can be proposed to stamp out any widespread cultural issues uncovered by the audit – should any exist.

Concurrently, activists are calling on city leaders to revise disciplinary policy relating to the use of racist language, to release training materials used at the police academy, and to create a "comprehensive public process" to evaluate those materials, revising them if necessary to create "a force free of bias and focused on the safety of all Aus­tin­ites." At the press event, Moore issued a challenge to Austin: "What do we have to do to be the progressive city we say we are?"

Allegations of bigotry within APD's top ranks do not end there. Another complaint, also filed Oct. 30, alleges that APD Chief of Staff Troy Gay tried to subject a family member to "conversion therapy," with Man­ley's support. The discredited "therapy" seeks to change a person's sexual orientation – usually against their will – and has been made illegal in more than a dozen states, though not here in Texas. "There was also a fear that this anti-gay mindset would come out in the Dusterhoft arbitration," the anonymous complaint lodged against Gay and Manley reads, "but if it didn't it would remain a secret for the good of the department." (Police Commander Jason Dusterhoft, formerly an assistant chief, was terminated by Manley in Decem­ber 2018 amid allegations of sexual misconduct; his appeal for reinstatement went to arbitration in September.)

The board of the Austin Police Assoc­i­a­tion voted unanimously to send a letter to Cronk calling for a third-party investigation. APA President Ken Casaday told us he was "horrified" by the allegations of racism and homophobia, and "disturbed" by the allegation that Manley and Gay might have helped cover them up. "I know our officers are held to a very high standard," he told us, "and we expect our leaders to be held to the same standard."

Casaday told us he would support an audit of the social media accounts of APD officers, because APA stresses to new recruits the importance of not posting anything online that would reflect poorly on the department. "I'm not fearful of [an audit] because we already tell officers: 'Don't post anything you wouldn't want your employer or grandmother to see.'" But one of the requests from activists – a moratorium on new cadet classes until a new training curriculum could be developed – went too far. Casaday pointed to a shortage of officers – which activists dispute – as reason to continue recruiting new classes, adding that APD does its best to screen for bias in officers, but "it's impossible to root out everybody who might be a racist."

Closing out the press conference, Harper-Madison said she "appreciates the opportunity for humans to evolve" beyond bigoted ideology, but she also asked her white colleagues to be "mindful and considerate" of the real harm these attitudes can have on people of color. She hopes the city can move beyond "slaps on the wrist" for the kind of behavior alleged of Newsom, and on to more meaningful reform.