Beer Brawl in the “Cleanest Little City in Texas”

In the home of Shiner Bock beer, Karbach Brewing Co. rents out billboards to announce “there’s a new Bock in Shiner” According to Karbach Brewing Co. Brand Manager David Graham, "When we got the call from Del Papa Distributing [also a 110-year-old, Texas-based business] in Shiner, TX, asking us to help them support the Lion's Club Shiner Music Fest, the partnership was an easy 'yes' from us."

Banners inside the fest as well as the three billboards advertised Karbach's Crawford Bock beer with the message: "There's a new Bock in Shiner." Fighting words? Spoetzl Brewery thought so. Summoning the spirit of the Alamo, Spoetzl rebutted with an open letter in the Nov. 7 issue of The Shiner Gazette, which in part read:

"[Anheuser-Busch InBev SA/NV] is a huge company with deep pockets seeking to force its way into our town. It is not the first time they have tried to imitate our iconic Shiner Bock. ...

"It won't be the first time some local Texans faced unbelievable odds. ... To the drinkers who love Shiner, we say 'Cheers' and to the giant breweries, as our friends down the road once said, 'Come and Take It.'"

Charlie Paulette, director of marketing for Karbach, who spent 20 of 25 years in the craft beer business working for Shiner (plus time at Real Ale Brewing), told the Chronicle that Del Papa was approached "because Gambrinus [Shiner's parent company] decided to pull out as the primary sponsor."

He continued, "As far as Crawford Bock is concerned, it was never intended to be a Shiner Bock knockoff as [Spoetzl's] letter implies. I personally worked with the Houston Astros Foundation to create the collaboration beer, which has now raised over $100,000 to support local Houston charities. I don't appreciate the name-­calling [from Shiner] that continues to create divisiveness among beer companies and consumers." 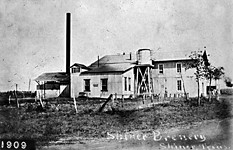 A Texas Guide to Sour, Salty Beer
Where to get your gose around town