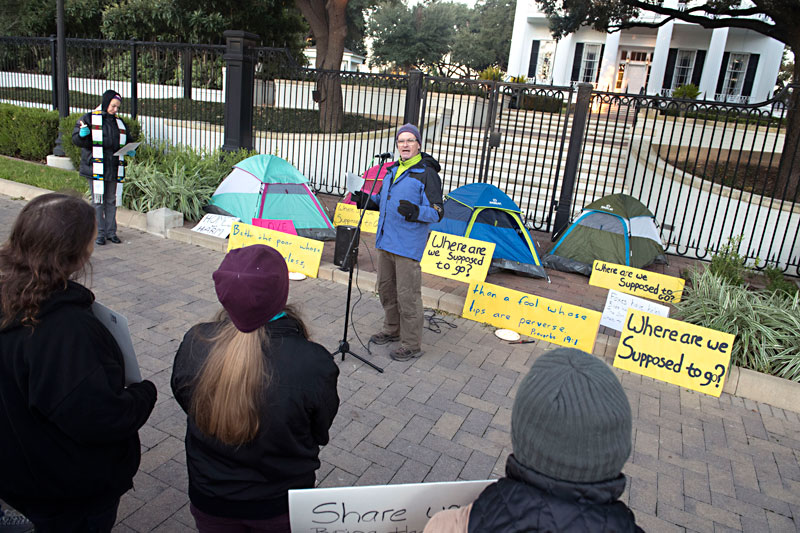 Rev. Tom VandeStadt, pastor of the Congregational Church of Austin, leads a Sunrise Service for homelessness outside of the Governor's Mansion on Friday, Nov. 1. (Photo by John Anderson)

Bobby Moore Spared: The Houston man convicted in 1980 for the capital murder of grocery clerk James McCarble has been spared execution. On the morning of Nov. 6, the Texas Court of Criminal Appeals begrudgingly commuted Bobby Moore's death sentence to life imprisonment due to his intellectual disability. See "Bobby Moore Will Not Be Executed".

It's Not a Receipt! Travis County Clerk Dana DeBeauvoir said delayed election results Tuesday night could partially be attributed to the use of new voting machines across the county, which require voters to make selections electronically to then be printed on a paper ballot and inserted into a scanning machine. But some voters mistakenly tried to leave with their paper ballot, leading to discrepancies in the vote counts at some polling locations, which required recounts before results could be submitted to the clerk.

LDC Update: Planning Commission held two meetings this week to hustle through a ton of proposals for amendments to the Land Development Code draft that City Council will take up in earnest at a work session on Nov. 18. Meanwhile, the city's November Office Hours for the public to resolve questions about their properties are already full; check www.austintexas.gov/ldc-participate for the next round.

Pinnacle Future Unknown: The Austin Community College Board of Trustees voted unanimously on Nov. 4 to reject all offers made for the district's Southwest Pinnacle campus. The board had voted in April to move forward with selling the property, but district staff recommended holding off to gather more community feedback on what the future of the property should be.

Trans Youth: The Dallas custody case that sparked anti-trans rhetoric from conservative politicians across the state continues. Dr. Anne Geor­gu­l­as, the mother of the trans kid at the center of the conversation, filed motions for Judge Kim Cooks to recuse herself. Last month a jury ruled 11-1 to grant Georgulas sole custody, but Cooks intervened to allow the child's anti-trans father to remain involved in treatment decisions.

Blue Wave Cometh: For the first time in years, Virginia Dems took control of the state House and Senate Tuesday; while in Kentucky, voters rallied for Democratic challenger Andy Breshear in the governor's race, who led by 5,086 votes, although incumbent Republican Matt Bevin refuses to concede, claiming voting "irregularities."