Advocates push to save Pease, Brooke 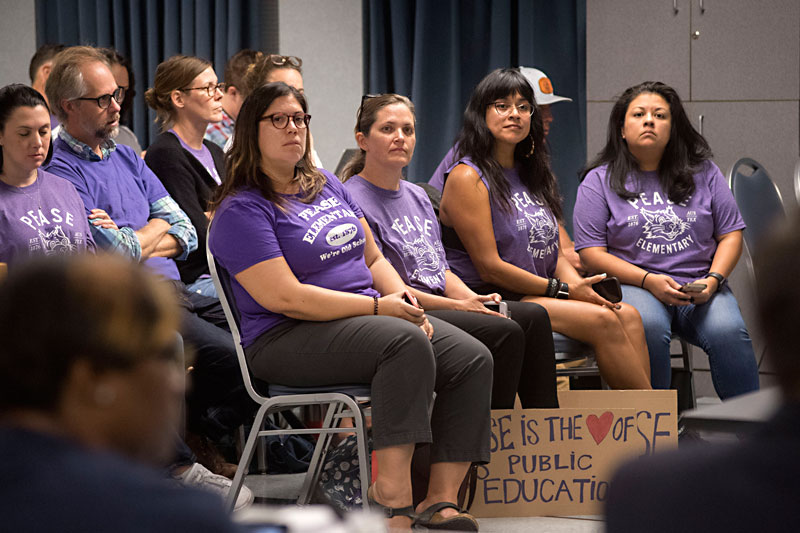 Parents in support of Pease Elementary at an AISD board meeting in September. (Photo by John Anderson)

Eight of the school campuses initially identified for closure and consolidation under Austin ISD's sweeping, multiyear School Changes process have had those plans stayed – for now. But four other campuses remain set to close over the next two years under the 2.0 version of School Changes released Friday, Nov. 1: Metz, Sims, Pease, and Brooke elementary schools.

The Metz and Sims closures were expected even before the School Changes train got moving. Modernization projects at each receiving campus (Sanchez and Norman, respectively) are underway now, using 2017 bond dollars amounting to $25 million each. The district's decision to move forward with closing Pease is a major blow to the community there, which has rallied intense support behind an alternative plan to transform the Downtown site with a new structure alongside the historic building, to accommodate more than 500 students. AISD says the constraints at the site are too great for such a project, given that the current building must be preserved and (under the terms of the state of Texas' long-ago conveyance of the property to the district) used for education.

The planned closure of Pease means that not all of the campuses on the list are east of I-35. The all-transfer school has typically had more lower-income students and students of color than most west side schools, though not reaching the same levels as the district as a whole or the other three campuses to be closed, all in gentrifying East Austin neighborhoods. For now, the plan is for Pease students to simply go to the schools they are zoned for; AISD staff says that could change if there's an agreement with the Pease community on a single school to receive all its students.

Closure plans at Brooke are more tentative. Currently, the district intends to shutter the East Fourth Street campus next year and send its students to either Govalle or Lin­der, both also currently being modernized. But despite not having the resources to advocate as loudly as parents at Maplewood or Ridgetop, the Brooke community has been passionate in its insistence that the school should remain open, and the district has not ruled out removing it from the list.

At Maplewood and Ridgetop, as well as Joslin, Dawson, Pecan Springs, and Palm elementaries, and two middle schools, Bertha Sadler Means and Webb, AISD aims to "continue conversations with the communities" in hopes of finding a solution that is more agreeable to each. The district also nixed eight other proposed School Changes scenarios, including one to make Northeast Early College High School, the former Reagan HS, a 6-12 campus (an idea no one seemed to understand or want); a similar 6-12 transition at Covington Middle School; the addition of an e-sports program at some high schools; and the expansion of engineering and computer science programs in the Bowie High School vertical team.

The AISD board of trustees weighed in on the 2.0 plan for the first time at a work session on Monday, Nov. 4 – and for the most part, trustees seem satisfied with how the district listened to concerns from affected school communities and responded with a revised plan. Board President Geronimo Rod­ri­guez acknowledged the four closures would be painful for each school community, but said they were needed. "We have to recognize that change is hard and no one wants to close schools," he said, "but we live in a society where change is constant. The district has to manage the changes thoughtfully."

Despite general agreement on the first phase of the plan, trustees still have many questions – notably, how much the proposed scenarios will actually cost. AISD Chief Finan­cial Officer Nicole Conley emphasized that closing the four elementaries would reduce the district's financial burden both in operations (where the aging facilities have higher costs) and capital spending (to otherwise modernize the campuses as part of the district's next bond package). Conley said her team has developed cost estimates for "transition planning" to help the district implement the School Changes scenarios.

What trustees will next vote to approve is still being finalized, but it will likely include the four closures, some districtwide initiatives (like extended school hours and a cultural proficiency program), and boundary changes in the south and southwest parts of the district. Staff will continue gathering feedback at community engagement sessions over the next two weeks, before trustees vote on Nov. 18.