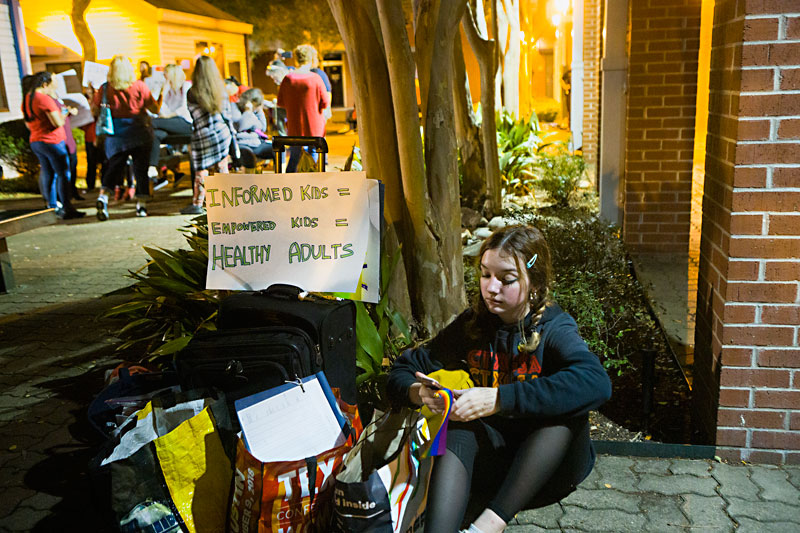 Supporters of the new curriculum gathered outside the boardroom. (Photo by Jana Birchum)

Beginning next year, Austin ISD students will, for the first time, have an opportunity to learn about gender identity and same-sex relationships from trained adults in a classroom setting. On a unanimous vote in the early hours of Tuesday, Oct. 29, the AISD Board of Trustees gave final approval to new lessons in the district's updated Human Sexuality and Responsibility curriculum.

The vote represents a step forward for a district that has struggled to live up to its slogan of "All Means All." The progress made, and the impact it will have for future generations of AISD students, was embodied in the hopes shared by Concetta Pil­grim, a third grader at Ridgetop Elementary who identifies as gender nonbinary. Before the meeting, Concetta told the Chronicle they were there because "[some] people don't want us to learn about other genders, or about what other people are."

Concetta's mother Maya told us that two years ago, Concetta didn't have the words to understand, let alone articulate, what they were going through in terms of comprehending their gender. But once Concetta gained that knowledge, they had no trouble in describing their emotional response: "Happy," they told us, simply.

The new curriculum comes after three contentious years for the district, with some parents and community members still fearful of different genders and sexual orientations, and others who understand that explaining these concepts to children leads to healthier, more dignified lives for LGBTQ youth, who are at a disproportionate risk of suicide when compared to their cisgender and heterosexual peers. New lessons will introduce students to the differences between gender identity, gender expression, and biological anatomy in the fifth grade, through an illustration of a "genderbread person" that communicates visually the distinctions between a person's mental perception of their gender, how they present that gender to the outer world, and a person's sex assigned at birth.

Before learning those concepts, in third grade students would be introduced to many facets of identity (e.g. physical characteristics, interests, etc.), to provide a foundation for learning about gender identity. The curriculum builds on these in sixth grade by exploring gender stereotypes, gender terms (transgender, cisgender, gender nonbinary), and the words that explain physical attraction – lesbian, gay, bisexual, etc. In eighth grade, students will engage in a more nuanced look at gender through discussion on how societal perceptions can influence how one perceives their identity and body image.

Trustee Jayme Mathias – a gay man and a pastor at the Holy Family Catholic Church – reflected on the new curriculum Tuesday. "I was raised in a rural, conservative, small-town environment. I am the product of 13 years of public education, and not once do I remember any type of education in the way I see in this revised curriculum," he told the Chronicle. "We've come a long way from when I was a child to the students today, who have access to information at their fingertips. We adults can choose if we want to accompany them on that journey, or leave them to their own devices."

The lessons are designed to help both queer youth and their peers gain a better understanding of modern concepts of gender and sexual orientation, incrementally and with trained adult guidance. Beyond addressing LGBTQ acceptance, the new curriculum teaches students how to maintain healthy relationships with friends and family, including how to ask for and receive consent – empowering some to reject uncomfortable advances and helping others process that rejection in a healthy way.

As state law requires, AISD will still teach students that abstinence is the most reliable way to avoid unplanned pregnancies and sexually transmitted diseases. But the lessons will not avoid the reality that teens have sex; beginning in seventh grade, students will learn "about the use of contraception, including abstinence and condoms." Parents will be able to opt out of the entire curriculum or individual lessons they may find age-inappropriate. (The district plans to offer this opportunity next March, before the lessons are taught in May.)

Monday night's board meeting featured the most speakers signed up for public comment in the district's history. Before the meeting began, anti-LGBTQ group Texas Values held a press conference, which was interrupted by trans activist Naomi Wilson, who was arrested by AISD police. On Tues­day, after her release on bail, Wilson told us she "didn't want their hate speech to be given validity. Because to them, my life as a trans woman doesn't matter."

“I want the students to know,” said Singh, as the “concerned parents” began to hiss and boo, “their school is a safe place. It’s a place where people love you, and they’re there to accept you.”

The highly visible crowd of "concerned parents" and community members allied with Texas Values dominated the input at Monday's meeting, but the vast majority of parents surveyed by AISD as it worked to rewrite the curriculum – 95% of more than 6,000 respondents – supported the effort. Trustees had already, in February, given their unanimous approval to the "scope and sequence" of the curriculum.

After this week's vote, Trustee Arati Singh sent a clear message to anyone watching at home: "I want the students to know," she said, as the "concerned parents" began to hiss and boo, "their school is a safe place. It's a place where people love you, and they're there to accept you."

Board President Geronimo Rodriguez agreed, telling us on Tuesday that he was proud of how trustees handled the issue. "Parents have a right to opt out of any of the individual lessons," he said. "But recognizing and valuing each individual student for who they are and teaching about consent are both very key."

Wilson, who struggled with gender identity before transitioning as a young adult, explained the impact that learning to accept – and respect – the identity of others could have for future students. "I felt so alone as a kid because everyone picked on me," Wilson told us. "If I was taught this kind of curriculum in school, I would have been able to find a community who accepted me earlier. I would have been less afraid."