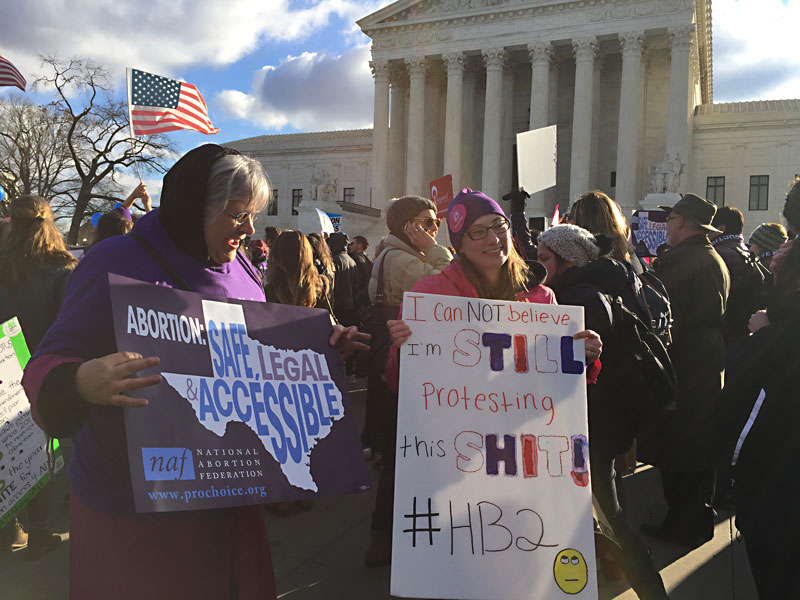 Opponents of HB 2 outside the U.S. Supreme Court in 2016, as justices heard arguments in Whole Woman's Health v. Hellerstedt (Photo by Mary Tuma)

The U.S. Supreme Court has several significant cases on its docket this term – touching on LGBTQ rights, immigration, and Obamacare – which could have years of lasting impact on Americans. Also among them is a suit out of Louisiana, June Med­ical Services v. Gee, which challenges a 2014 law requiring abortion physicians to obtain admitting privileges at a hospital no more than 30 miles from where the abortion is performed. Advocates and providers say the unnecessary rule would effectively shutter clinics, as those privileges are often difficult to come by for both logistical and religious reasons, and are wholly unnecessary from a medical perspective.

If the draconian requirement sounds familiar, it should. In the historic 2016 Whole Woman's Health v. Hellerstedt case – the challenge to two provisions within anti-choice House Bill 2 – SCOTUS ruled an identical Texas law unconstitutional. That 5-3 ruling assured that states, going forward, would only enact abortion restrictions if there is legitimate medical necessity and evidence of benefit. So if the justices already made a decision on the law and set precedent, why is it being relitigated?

“People say [Whole Woman’s] is the most important reproductive rights case of our generation, so of course Trump, Kavanaugh, and their lackeys are going to come after us.”– Whole Woman’s Health CEO Amy Hagstrom Miller

Rather than adhere to the landmark SCOTUS ruling and throw out the Louisiana law, a three-judge panel of the notoriously conservative 5th U.S. Circuit Court of Appeals – which zealously defends Texas anti-choice laws – argued the provision wouldn't be an "undue burden" on women – the standard SCOTUS set forth in 1992's Casey v. Plan­ned Parenthood for weighing the legality of an abortion restriction – as other doctors could step in to fill the gaps left by nonprivileged physicians. They also slammed Louis­iana doctors for having "sat on their hands" rather than seek those admitting privileges. "Unlike Texas, Louisiana presents some evidence of a minimal benefit," wrote Judge Jerry Smith in the majority ruling, defying SCOTUS's Whole Woman's ruling. "The admitting privileges requirement performs a real, and previously unaddressed, credentialing function that promotes the well-being of women seeking abortion." It's apparently no worry for the 5th Circuit that only one doctor in the whole state could currently practice the procedure under the law and that likely only a single abortion clinic would survive the targeted regulation. Louisiana providers had no choice but to appeal to SCOTUS.

Stephanie Toti, who argued successfully before the high court on behalf of Texas abortion providers in Whole Woman's, tells the Chronicle the relitigation of a landmark ruling is fairly rare. "This is not common but it does occasionally happen, especially if a court of appeals has difficulty applying precedent or doesn't understand how to implement it – and that's what's happened here," says Toti.

Since Whole Woman's, the makeup of the Supreme Court has grown more conservative, with the departure of Justice Anthony Kennedy (the swing vote in the Texas case) and the appointments of Justices Neil Gorsuch and Brett Kavanaugh (replacing Kennedy). The newest justice has already expressed his desire to maintain the anti-choice law, meaning the chances of steamrolling critical advances won by abortion rights advocates is far more likely.

When the head of Whole Woman's Health learned that SCOTUS was going to take up the very law she spent years fighting in court, it felt like a "punch to the gut. ... I had the feeling of the wind being knocked out of me," Amy Hagstrom Miller says. "We fought this and won a strong victory and now they're pretending it just doesn't matter. And even more, we're going to forget about how negatively people's lives are going to be affected by a law that's not based on facts but on politics. It's a big step back."

Miller knows all too well the destruction left in the law's wake. Following HB 2, half the clinics in Texas closed, including Miller's flagship Austin site. While her Austin clinic reopened (after three years), most others haven't. The law forced appointment wait times to skyrocket, as well as travel time; of the 22 providers in Texas (down from 40), none is located between El Paso and San Antonio. Miller says today many women are forced to trek more than 150 miles for care, an impact still felt well after the law was struck down. "There's a real lasting effect even in the shadow of this incredible win we had at SCOTUS," she says. "The victory on paper doesn't mean clinics are going to reopen quickly – or ever."

While two Texas abortion-related cases are both temporarily halted and tied up at the 5th Circuit – one challenging a ban on D&E abortion, in which Miller is again a plaintiff, and another that hopes to permanently overturn a fetal burial rule – could have potentially found their way to SCOTUS, the appellate court has decided to wait until the high court resolves Gee. Miller, "angry but not surprised," says it's no wonder conservatives are gunning for a reversal of the ground won. "People say [Whole Woman's] is the most important reproductive rights case of our generation, so of course Trump, Kavanaugh, and their lackeys are going to come after us."

If SCOTUS upholds the Louisiana law, it may not have an immediate impact in Texas depending on the ruling, says Toti. But it would certainly give lawmakers the go-­ahead to pass similar Targeted Regula­tion of Abortion Providers (TRAP) laws – and anti-choice state politicians will inevitably jump at the chance come next Lege session. Toti says a SCOTUS hearing is likely to be scheduled for the winter, with a ruling expected by June. "The court should absolutely adhere to the precedent established in Whole Woman's," she told us. "Based on the evidence on the record in the Louisiana case, the statute doesn't offer any medical benefit and would similarly burden people in the state as it did in Texas." 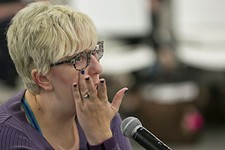