City Council Ready to Move on From Camping Ban

"Council made a decision, and it's time for us to move past the divisiveness in the community" 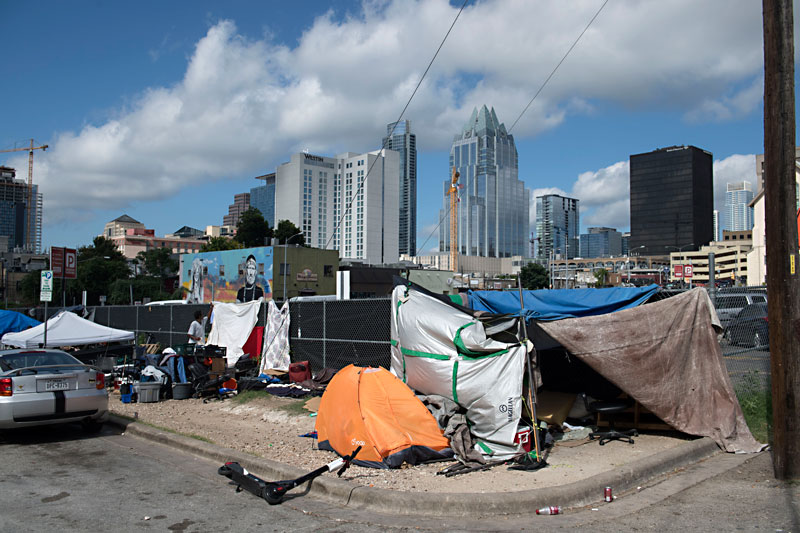 The revised ordinance will restrict camping in the Downtown blocks near the Austin Resource Center for the Homeless. (Photo by John Anderson)

New rules covering public camping in Austin will go into effect on Sunday, Oct. 27, and enforcement of a ban on camping near the Austin Resource Center for the Home­less is expected to begin the following day. The ARCH no-camping zone includes much of the northeast quadrant of Downtown, between E. Fourth, Brushy, E. 11th, and Brazos. If a person is found camping within that area, police officers must take a series of steps before issuing a citation for violating the ordinance.

Specifically, those believed to be in violation of the new ordinance – whether near the ARCH (or near any future city-operated shelters), or within 15 feet of an entrance to a business (throughout the city) during operating hours – must first be advised by police that a "lawful alternative place to camp" can be found outside those areas. Then, officers must inform those persons, "to the best of (their) knowledge," of available shelter and housing in the city, and finally must contact, if "reasonable and appropriate," a "city designee" who can either transport those persons to a place where camping is allowed, or connect them with a homelessness service provider.

Before any rules to ban camping near a shelter can go into effect, City Manager Spencer Cronk must first "certify" that "appropriate services and non-shelter" housing have been offered to anyone believed to be camping in the area; post a report online documenting those efforts; and then ensure the individuals have been "adequately educated" about the new partial ban on camping.

“I was disappointed in what we voted on. But the Council made a decision, and it’s time for us to move past the divisiveness in the community. We all need to be working together to connect people with housing.”

It's unclear at this time what form the required report will take, but the effort to connect people to services around the ARCH began last week. As part of a multi-agency pilot program called "Guided Paths," social workers employed at ARCH have interviewed people camping outside the building to assess their needs. So far, Front Steps (the nonprofit that operates the ARCH) has built a list of over 80 people camping in the area. About 20 have agreed to take shelter within the ARCH – which now requires a commitment to case management – and engage with services aimed at getting them housed.

With this initial survey complete, Front Steps executive director Greg McCormack told us, the next step is to connect people with providers – Integral Care, Caritas, Front Steps itself, or others – that can help meet their identified needs and get them on the path toward housing. "I think we do have the resources to support the 20 we've identified," McCormack told me this week. "The goal will be to get them housed within 60 days or so." As for the 60-odd individuals who declined an offer of services? They'll be subject to enforcement of the new camping ban, but McCormack said the city, Front Steps, and other agencies intend to continue following them (now that they've been identified) with offers for services. The new camping rules were approved by Council on a 7-4 vote on Thursday, Oct. 17, with Council Members Kathie Tovo, Ann Kitchen, Alison Alter, and Leslie Pool voting against. Each of them advocated for more explicit ordinance language to define where camping that causes an obstruction is prohibited, including amendments to specifically ban camping in places such as ADA accessible ramps, sidewalks along specific streets, and on traffic islands and medians. Most of those efforts failed (one exception: a ban on camping in high wildfire risk areas, which includes many Austin parks and greenbelts). Other city ordinances, as well as state and federal law, already restrict camping in these areas, but Kitchen told us that she wanted the prohibitions spelled out clearly, as constituents had expressed concerns about a lack of clarity in what was banned. An explicit ban on camping in traffic medians and islands – such as along Ben White Boulevard near Manchaca, in Kitchen's District 5 – was especially important to the CM; instead, Council approved language authorizing Cronk and Austin police to determine when and where such camping is unsafe.

Despite losing out on that vote, Kitchen shares the view of others on Council that it's time to move on from debating ordinance language. "I was disappointed in what we voted on," she told us. "But the Council made a decision, and it's time for us to move past the divisiveness in the community. We all need to be working together to connect people with housing."

It's clear that some in the community are not ready to move on. A spokesperson for Gov. Greg Abbott, for instance, told us that the Nov. 1 deadline he gave Mayor Steve Adler to "take action" that would avert state intervention still applied, and if complaints continue, cleanups under bridges and overpasses on state highways (such as Ben White) could resume after being abruptly halted in March. Travis County GOP chairman Matt Mackowiak said the new rules were "marginally better" than the ordinance language adopted by Council in June, but he'll be watching to see if the city's approach would "continue to make people's lives worse."

Last week, Austin officials said they have seen no reason to believe any public safety or health crisis is gripping the city. However, the misinformation campaign continues. Over the weekend, Mackowiak tweeted a sensational claim that people experiencing homelessness in Seattle were being bussed to Austin. Such claims are pervasive in the debate on homelessness, and Mackowiak confirmed to us on Monday that he did not contact any officials in Seattle to verify the allegation, which was reported to him from a family friend who heard it from a bus driver outside of a hotel. Meg Olberding, a spokes­person with Seattle's Human Ser­vices Department, told us that as part of the city's "All Home" program regarding homelessness in the region, diversion efforts include connecting individuals with friends or relatives in other communities. That does mean buying bus tickets for some (out of 399 people who have exited into permanent housing through the program since Dec­ember 2018, 24 got bus tickets). However, despite Mackowiak's alarmism, "The City of Seattle does not have a 'bus program'," Olverding told the Chronicle via email. "Rather, we work with our agency providers to take a person-centered approach, offering what is known as 'Diver­sion,' to find whatever unique solution might help them attain/retain stable housing."

Matt Mollica, executive director of the End Community Homelessness Coalition (ECHO), Austin's lead agency responding to homelessness, said such an approach is critical to effectively engage with and provide services to people experiencing homelessness. "When communities come together and identify the best resource for an individual," Mollica told us, "that's what good homeless response systems do." As for the tweet from Mackowiak and other misinformation like it: "Those claims perpetuate a fear-based politics that isn't helping anyone implement the solutions we need," Mollica said.