How Could Zoning Change in Your Neighborhood?

From single-family homes to 40-foot townhomes, mapping the transition areas and zones

One of the most highly anticipated components of the LDC revision involves the rezoning of properties along corridors, centers, and transit priority networks, as defined in Imagine Austin and the Austin Strategic Mobility Plan. These areas are seen by planners and developers as places where new housing capacity can be created to respond to market forces that have driven up land values in such desirable locations, with incremental increases in density (along what urbanists call a "transect") between existing single-family homes and these target areas. Code skeptics have worried loudly and publicly that this will effectively wipe out established neighborhoods that now lie within Austin's urban core and between high-demand centers and corridors. The LDC revision attempts to respond to both of these forces, as directed by City Council in its May 2 guidance to staff. Here's what their efforts look like in the mapping.

Transition areas are the parts of town – generally within one to three blocks of a corridor, center, or transit priority network – that are proposed to be rezoned for more missing-middle and multifamily uses.

Transition zones are the new zoning categories to be applied to all tracts in the transition areas that are currently zoned for single-family homes and duplexes, plus a scattering of other current zonings. There are two such zones: RM1 and R4, with one providing more height, more units, and more impervious cover nearer to a major corridor, and the other slightly less on lots farther away. 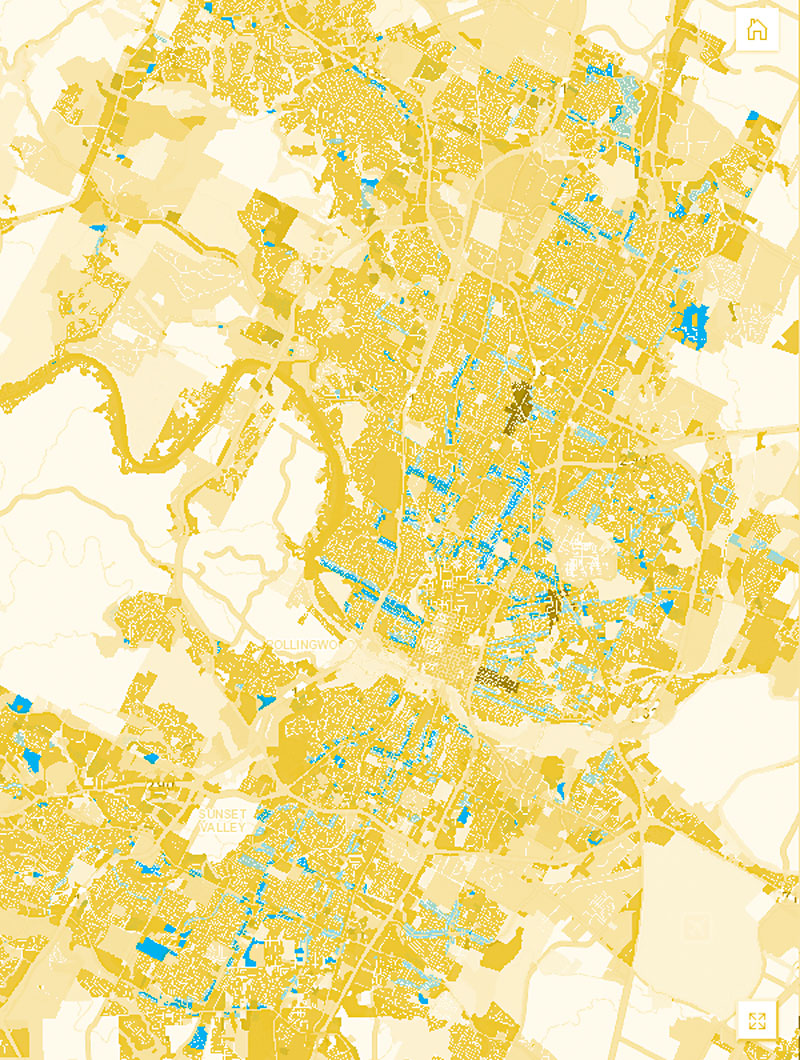 Below are six of the corridors with the most extensive transition zoning.

RM1: (DARK BLUE) A residential multi-unit zone. Generally, it allows 40 feet in height; 60% impervious cover; narrow lot widths for townhomes, duplexes, and live/work spaces; and up to 6 units on a 5,000-square-foot lot, or up to 10 units with participation in an Affordable Housing Bonus Program (AHBP).

Single-Family/Duplex: (YELLOW) Properties outside the transition areas currently zoned SF will generally be rezoned to R2A, allowing two units per lot or, in some cases, left with their current zoning.

Other Zones: (OTHER COLORS) Properties in the transition areas zoned other than single-family/duplex residential were generally either left with their current zoning or given roughly similar new zoning.

Running north from the UT campus through Hancock, Hyde Park, and Ridgetop, this corridor stands out as the only transition area that's currently zoned for single-family/duplex housing along almost its entire length, which changes significantly under the proposed zoning map. Council Member Kathie Tovo, whose District 9 includes the area, highlighted Duval as a point of concern at Council's special called meeting to discuss the LDC revision on Tuesday, Oct. 8.

(where the Chronicle office sits) may be the city's most heavily upzoned neighborhood. Compare the amount of single-family (yellow) before and after.

gets more R4, not as much RM1, as it was identified as an area at risk for displacement in the recent UT gentrification study.

are the most significant transition areas on the west side.

gets transition areas along South Congress and South First, with not a lot of room in between.