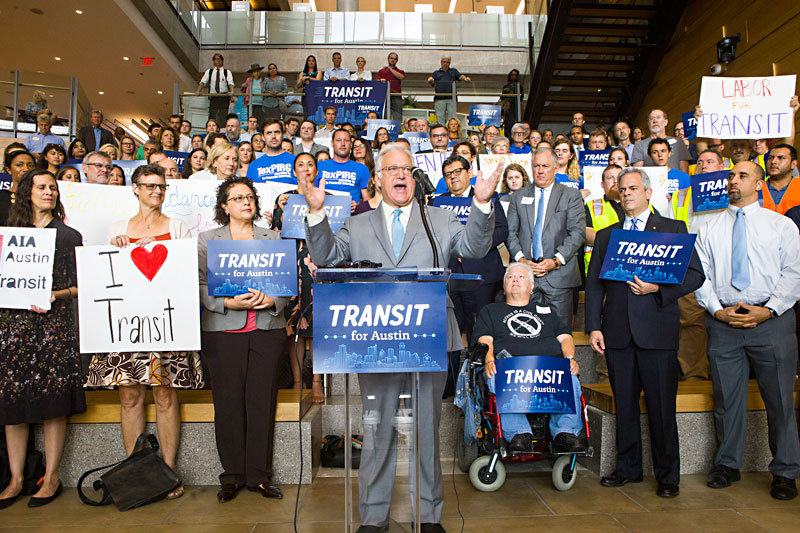 Sen. Kirk Watson, D-Austin, leads a congregation of local boldfaced names in launching Transit for Austin's push for a "big and bold move" on mobility – likely leading up to a November 2020 transit bond package of more than $1 billion. More in "Austin at Large," below. (Photo by Jana Birchum)

Dark Casa: City Council's 100-Item agenda (for today, Thu., Oct. 3) looks onerous but is contract- and zoning-heavy. There might be fuss over Visit Austin's budget proposal (a potential target for anti-Convention Center rhetoric), a couple of eminent domain cases, and an appeal of occupancy and fire permit denials for Casa de Luz concerning code violations. See "Batten Down the Hatches, a New Land Use Code’s Blowin’ In!" for more.

Clean Up The Streets: So demands Gov. Greg Abbott in a threatening letter to Mayor Steve Adler, giving Austin one month to sufficiently solve (or hide) its homelessness crisis, or else. More on this tasteless, manipulative bullshit here.

Unlimited: The Austin City Limits Festival kicks off at Zilker Park this weekend (Oct. 4-6) with Guns N' Roses, Childish Gambino, the Cure, and Cardi B among headliners, followed next weekend (Oct. 11-13) by Robyn, which means the Great Lawn will be closed through Oct. 30.

Car-2-Gone: After making Austin one of the continent's first car-sharing cities a decade ago, car2go has made the "difficult decision" to end its presence here on Oct. 31. The Daimler venture's business model has been battered by the rise of Uber and Lyft, scooters, and other services.

Historic Numbers: Travis County on Tuesday reached its "highest number of registered voters ever," with more than 800,000 people – or 93.5% of all eligible voters – registered.

Are You Registered? Monday, Oct. 7, is the last day to register to vote in the November 5 elections. Confirm your status at www.traviscountyclerk.org.

Talk About the Weather: October brings a welcome breeze after September broke records for the hottest in Austin history with 19 days of triple-digit temps, averaging 88 degrees overall.