Young Community Organizers Unite Over Equitable Land Use in Austin 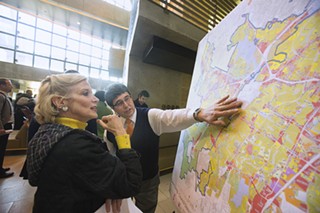 A new group of young community organizers announced it will mount an effort to ensure the city's new land development code allows for "equitable access to healthy and affordable homes and neighborhoods for communities of color and working class people in Austin" through advocacy and outreach. Although not a formal political organization, the Planning Our Communities group brings together people of color from social justice, transit, and housing activist spaces who intend to use their experience to make sure historically marginalized voices are heard.

At a press conference Tuesday at City Hall, members of the group were joined by Council Members Natasha Harper-Madison, Pio Renteria, Greg Casar, and Mayor Pro Tem Delia Garza to endorse POC's mission. Maximizing income-restricted housing throughout all parts of the city is a major goal for the group as the new code is debated and voted on through the end of 2019; they hope to grow that housing supply with better use and expansion of the city's Density Bonus Program. Planning Commissioner Awais Azhar said that such developments need to happen in parts of the city that have been "historically exclusive" and not concentrated on the Eastside amid gentrification and displacement. But POC also wants to get away from polarizing land use narratives; Austin Justice Coalition founder Chas Moore said, "On one hand, I'm not a NIMBY. On the other hand, I'm not an urbanist. ... The answer isn't build everything everywhere, and the answer isn't [to] build nothing. We need to plan for equity, and we can only do that if we include more voices."

A version of this article appeared in print on September 27, 2019 with the headline: Planning Our Communities Unites Activists Over Equitable Land Use 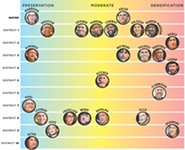