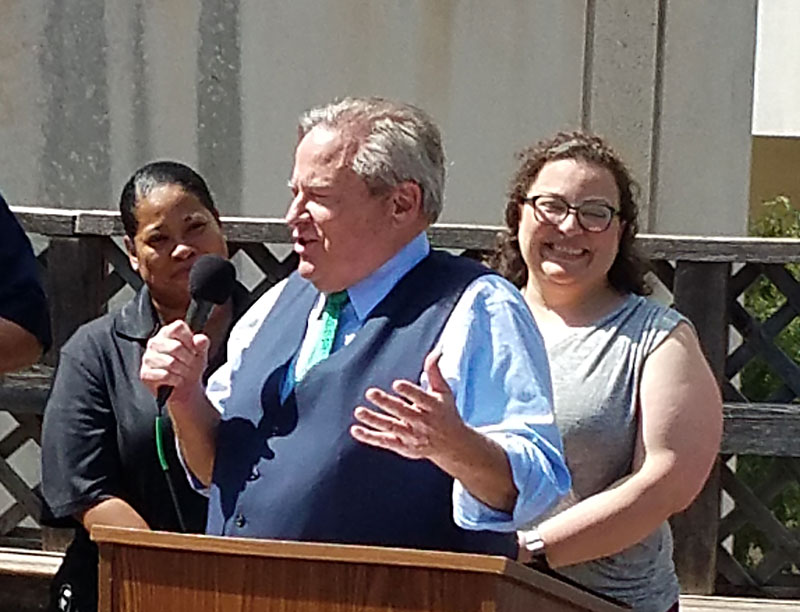 On Tuesday, beneath the towering monolith of the Blackwell-Thurman Criminal Justice Center, newly retired County Court-at-Law Judge Mike Denton formally announced his candidacy for Travis County Attorney. Denton hopes to succeed longtime incumbent David Escamilla, who has announced his retirement at the end of this year.

Denton joins criminal defense attorney Dominic Selvera and Assistant County Attorney Laurie Eiserloh as official candidates in the Democratic primary, expected to be joined by at least one other: Austin Mayor Pro Tem Delia Garza, who has expressed "strong interest" in the position but (under state law) would automatically resign her current office if she declared her candidacy now.

Denton emphasized both his prosecutorial and judicial experience in making his case, noting particularly his work to create specialized courts that emphasize diversion over conviction: domestic violence courts that work with families to lower recidivism, veterans courts that divert those accused of misdemeanors into rehabilitation programs (averting criminal records), and the Phoenix diversion court, which enables persons accused of prostitution to "turn their lives around" while also avoiding permanent criminal records. Denton said that if elected county attorney, he wants to expand upon these innovations in order to "protect the victims of crime" while simultaneously "turning around the lives of those who commit the crimes."

More broadly, Denton emphasized the larger social goals of the County Attorney's Office. He said he would expand its environmental enforcement division, focusing on corporate polluters to "hit them in the only place that matters to them – their bottom lines." He added that he intended to defend Travis County, for whom the C.A.'s Office serves as chief counsel in litigation, from ongoing attacks by the state Republican leadership in areas like voter suppression, extreme gerrymandering, and women's reproductive rights.

"Gov. Greg Abbott used to joke [when he was attorney general] about getting up every morning and suing the federal government. I have a message for him, and it's no joke. If you punish Travis County again for not submitting to Donald Trump, I'll get up the next morning and sue you." Denton cited in particular the punitive actions taken by the governor when the county refused to collaborate with U.S. Immigrations and Customs Enforcement against its residents, and the Legislature's moves to suppress voting rights and restrict women's rights to health care. "Hell yes, we will sue them – right here in this courthouse," Denton said, referring to the Heman Marion Sweatt Courthouse next door.

Denton was introduced by a group of Democratic notables that suggest he is building a formidable campaign. Katie Vitale called attention to his early lawsuit (as an assistant county attorney) against Operation Rescue, an anti-abortion group harassing women seeking reproductive health care. ("I went after the organization," Denton said later, "and it worked.") County Commissioner Margaret Gómez said Denton had helped "thousands of women," not out of a politically correct response to changing times, but instead as someone who had himself "changed the times."

Former state Senator Gonzalo Barrientos called Denton a "true public servant," a "doer, not a talker," who exemplifies "honesty, courage, compassion, and dedication." Former Texas agriculture commissioner and author Jim Hightower called Denton "a populist ... from the grassroots" who would act "by and for the people." Denton is "an unabashed progressive," Hightower said, "who will be Greg Abbott's worst nightmare."

In a brief conversation following the announcement, Denton told the Chronicle that even with continuing legal and financial pressure by state leadership to constrict and undermine local officials, there are ways for the county attorney to fight back against corporate corruption and state restrictions. "I don't want to skirt around the edges," he said. "When they come after us, I will go straight at them." Asked if he had any thoughts about his potential opponents for the Democratic nomination, he said, "I'm sure they are nice people, but I am the best choice."