Austin Justice Coalition, the NAACP, the Transgender Education Network of Texas, and more insist on "roundtable discussion" to address policing in schools 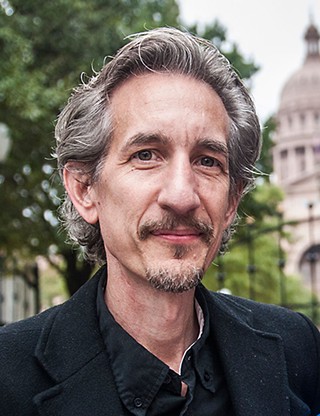 A coalition of community activists gathered on Friday, Sept. 20, to call on Austin ISD leaders to think about how the district's police officers interact with students, teachers, and members of the public at district meetings and events. Education Austin President Ken Zarifis assembled the group, which included representatives from Austin Justice Coalition, the local chapter of the NAACP, the Transgender Education Network of Texas, and candidates running for public office in Travis County, to insist on "roundtable discussions" to address policing in schools.

The call follows an incident which occurred at the Aug. 26 meeting of AISD's board of trustees, in which trans activist Naomi Wilson disrupted the meeting after being harassed by members of an anti-LGBTQ group called Concerned Parents of Texas. After voicing her frustration, Wilson was escorted out of the room by AISD police.

At the press conference, Wilson compared the treatment she received at the board meeting to the kind of bullying she faced in high school as a trans woman – especially in not feeling protected by the authorities in the room. "The police didn't pay attention to the provoking or bullying by these adults," Wilson said. "Instead, all they saw was me being fed up with the BS. ... People like me experience this kind of harassment on the regular." (The same group returned to harangue the trustees as they met this week.)

After opening an investigation into an allegation made against Wilson – by whom is unclear, although perhaps a Concerned Parent – AISD police obtained a warrant to confiscate Zarifis' phone after he was seen capturing the Aug. 26 incident on video. No evidence collected from the seizure corroborated the allegation against Wilson, and last week AISD officials confirmed to the Chronicle that the investigation had been closed.

Still, for Zarifis, the opening of an investigation in the first place and the use of a warrant – which he sees as an intimidation tactic – represented overreach by the district's police department. Moreover, he worries about how someone less accustomed to interacting with authority figures, like a student, might respond when a police officer makes a demand of them. "We have to be thinking about the students," Zarifis told us. "Not everyone is going to be as comfortable saying no to a police officer as I am."

Zarifis called on the district to mandate diversity and cultural proficiency training for all of its officers, as well as incorporating a "Know Your Rights" lesson into curriculum for students. He also called for a clear policy that "protects teacher rights" from Senate Bill 944, an update to the Texas Public Information Act passed by the Legislature this year that requires "employees of a governmental body" to preserve text messages for at least two years – a statute Zarifis fears could be used against teachers texting on their personal devices.

AISD police did not comment specifically on the requests made by Zarifis, but Chief Ashley Gonzalez issued a statement indicating that the department is receptive to community conversation. "The Austin ISD Police Department actively engages with stakeholder groups to best support our students, staff and community, as we have before," the statement reads. "We look forward to working directly with any group or organization to schedule a round-table discussion focused on ways we can continue to serve the AISD community."