Yes, you can do things to help the planet 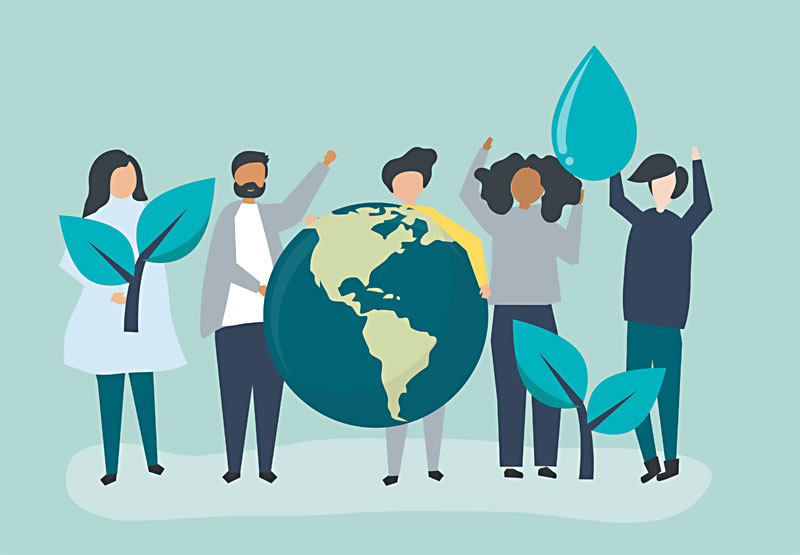 It's been commonly called the defining issue of our time. The last four years have gone down in history as the four hottest on record, sea levels are rising, coral reefs are dying, and the United Nations confirms the "life-threatening" effects of climate change are being felt throughout the world. It's time to fight back.

By taking immediate action, the UN says it's possible to reduce carbon emissions within 11 years, but doing so will require an "unprecedented effort from all sectors of society," because, according to Terrapass, a leading carbon offset business, the average American produces 36,000 pounds of CO2 emissions each year. One such effort is the Climate Action Summit in New York on Monday, Sept. 23, for government, business, and civic leaders to share plans on reducing greenhouse gas emissions by 45% by 2030 and reaching carbon neutrality (roughly zero emissions) by 2050 as laid out in the 2016 Paris Agreement. Austin committed to similar goals in 2014.

As individuals, it's hard to know what – if any – positive impact we can have on the planet and its rising temperatures. NPR all but told us recycling is dead in July 12's Planet Money podcast, while metal straws are marketed as the new hot commodity at local coffee shops. But as it turns out, our efforts can make a difference, and we're here to remind you to not give up; in fact, experts say that's the worst thing we can do. The TL;DR version is: Anything that reduces unnecessary consumption of energy and single-use products tends to be healthier and creates less waste. But for a more robust guide, keep on reading.

1) Change the way you use transportation. Calm down, Texas. We're not telling you to get rid of your car, but you can limit the number of auto trips you take weekly by bundling errands, carpooling, and taking public transit, which also allows you to disconnect from traffic, read, or – as one Austin Council member is a fan of doing – catch up on your emails. Bikes and even scooters provide alternative, fun, and healthier modes of travel to get you from A to B without emitting carbon.

Going farther than A to B? Next time you fly, consider purchasing carbon offsets – basically, donating to projects working to reduce greenhouse gas emissions beyond what can be achieved through individual action. Terrapass offers different packages to offset your carbon footprint and also provides a carbon calculator based on your car travel, flights, and home energy usage. (This writer's carbon footprint is 20,231 pounds of CO2, which would be offset by planting 235 urban trees.)

2) Eat less meat ... and dairy. Greenpeace reports that the livestock sector "generates as much greenhouse gas emissions as all cars, trucks and automobiles combined," while cattle ranchers are responsible for clear-cutting millions of carbon-consuming forest acres for grazing pastures. As per the city of Austin's guide to reducing our carbon footprints, the production of one pound of meat requires 1,850 gallons of water and results in 30 times more greenhouse gas emissions than one pound of vegetables, which only needs 39 gallons of water. We're not saying you must go vegan, but consider trying out Meatless Mondays, or as my wife does, Tortureless Tuesdays.

3) Reduce single-use plastic consumption. Huge amounts of fossil fuels are required to produce plastic bottles, and Healthy Human reports that 80% of these bottles end up in the landfill. Meanwhile, if not handled properly, the caps holding in all that H20 goodness aren't recyclable; they often find their way into the oceans and the bellies of numerous animals who "mistake them for food," writes One Green Planet. It's 2019; cute, reusable water bottles can be found practically everywhere. Stock up on a few, invest in a water filter if you don't like the taste of tap water, and ditch single-use. The same thing goes for reusable bags and non-plastic straws. Sure, switching to metal won't save the world one sip at a time, but it will significantly cut back on the amount of plastic taking over our landfills.

4) Unplug. Literally. Leaving appliances, chargers, and electronics plugged in when not in use burns up money and electricity. Austin Energy also suggests switching to LED lightbulbs (y'all did this in like 2013, yeah?), turning lights – and fans – off when leaving a room, washing clothes in cold water (it's better for the fabric anyway), and only doing laundry and running dishwashers when full. In fact, your (ratepayer-­owned!) energy utility has loads of great suggestions – some more burdensome than others, all worth checking out.

5) Push for systemic change. Yes, what each of us does matters, but what we all do to create systemic change matters ... let's not say more, but a lot. Which is why it's crucial that we take our commitment to climate action to the ballot box and continue to hold elected officials accountable, as well as the heads of companies – allowing consumers to make more sustainable choices.

A version of this article appeared in print on September 20, 2019 with the headline: No Climate Cop-Out!