Democrats and Their Campaign Teams Train Up to Turn Texas Blue 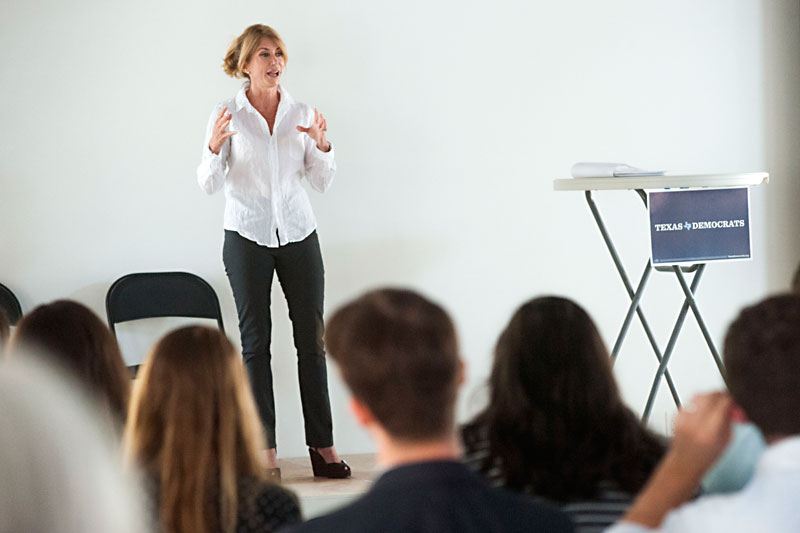 In a sparse studio at the Springdale General complex on the Eastside, the future of the Texas Democratic Party sat on fold-out chairs, attentively taking notes on a PowerPoint about ... emails. The presenter was Shelby Cole, currently digital director for the Kamala Harris campaign, and formerly the powerhouse behind Beto O'Rourke's fundraising success in his 2018 Senate bid.

As the group worked diligently on drafting imaginary campaign launch emails, one participant – Ryan Payne, from Bell County – raised his hand and asked what to say when he's "running against a goddamn Norman Rockwell painting." Cole acknowledged the challenge and considered. "I think the sweet spot for you is a contrast on the issues," she said.

"Nice is no longer enough," suggested another audience participant, to nods.

Cole was one of a number of presenters leading an unprecedented training program for 55 future campaign managers from across the state of Texas. The program, called Staff the Movement, was organized by the TDP to raise the caliber of state and local campaigns and to double down on its effort to turn the state blue as early as 2020. This kind of coordinated state party program is "historic," TDP Communications Director Abhi Rahman told the Chronicle.

"The direct idea of this came from the fact that we are so close to flipping the Texas state House [of Representatives]; we're only nine seats away," Rahman said. "The fact of the matter is that we need to create a talent pipeline in Texas so we not only win in 2020, but we win for generations to come."

As Democrats begin to take Texas seriously as a battleground state, the number of candidates is growing – and the party has a serious deficit in talented and trained campaign professionals, TDP Training Director Philippa Wood said. "We have the most number of candidates that we've had in many, many years. We were so excited. But it became glaringly obvious that we didn't have the capacity that we needed to support those candidates." 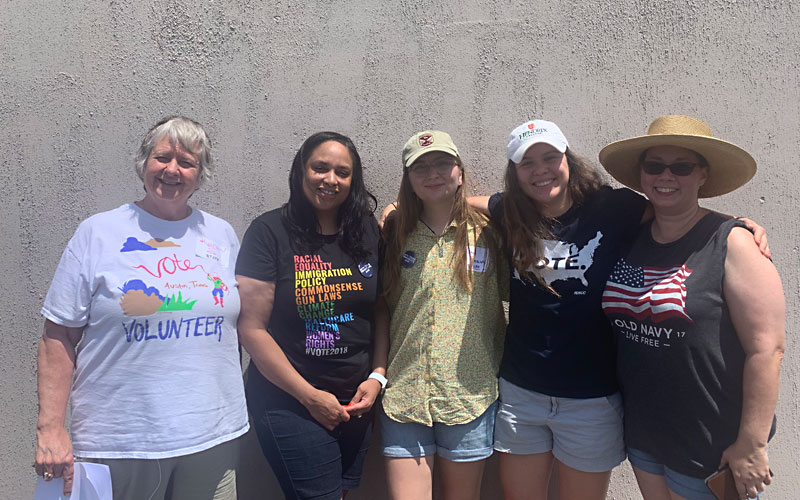 Thus, Staff the Movement: a four-month training program, the first edition of which concluded this past weekend (Sept. 14 and 15) with a talk by former state Sen. Wendy Davis, now running in the primary for the 21st Congressional District, to equip a new wave of campaign managers and advisers with the skills they need to turn Texas blue. The program's participants, hailing from across the state and chosen from a pool of 171 applicants, met in Austin monthly for sessions on a range of topics.

"We Gotta Jump In and Learn"

"It's important to show that all our candidates and elected officials are real people," Switzer said as she explained the art of tweet-crafting to a group that included members fresh out of college, well into retirement, and at many points in between. For many of the local and statewide elections that STM participants will one day be running, staff will be limited and having a dedicated communications or digital director is a "luxury" that most can't afford, Cole said.

Campaign managers often need to wear many hats, which is why they have to be trained in everything from organizing a canvassing operation to sending effective emails. "People don't take [email] seriously, but it's a huge messaging [and] fundraising opportunity that people often overlook. They're like, 'What's the point? It's going to take a lot of time to get it set up and running, and someone has to manage it,'" Cole said. "But it's an incredible way to talk to supporters ... [for] a lot of people, the biggest mistake or missed opportunity is overlooking it."

Running a campaign requires a "professional," Payne told the Chronicle. "It's a business; you've got to know who you're talking to, you've got to know how to raise the money, and you've got to be the person with the answers." He has been volunteering and working in politics since he was 16 years old, campaigning for everyone from local judicial candidates in Bell County to Barack Obama.

Sitting next to Payne was Etta Jones, an STM participant from the Dallas area who just recently got her start block-walking and phone-banking for the O'Rourke campaign in 2018. "My background is in marketing and communications, so I wanted to be able to contribute that, what I know how to do, into helping Texas turn blue," she said.

The STM team is remarkably diverse. According to Rahman, 71% identify as minorities, and 61% as women. They come from all over Texas, from a wide variety of professional backgrounds, and range in age from their early 20s to late 60s. Some of them have been involved in politics for years, but many didn't become active until after 2016, or until O'Rourke's Senate campaign in 2018.

“There’s so much energy and so many people ... who, maybe, traditionally have not participated in politics. We noticed there weren’t that many pathways to getting involved or toward that career shift, even though there was clearly interest.” – TDP’s Philippa Wood

"There's so much energy and so many people ... who, maybe, traditionally have not participated in politics," Wood said. "We noticed there weren't that many pathways to getting involved or toward that career shift, even though there was clearly interest." The party aimed for STM to be "one of the channels [for] people who wanted to get involved, were looking for ways to get involved, but weren't quite sure where to start."

Some participants aren't even native Texans. Michelle Ingalls didn't get involved in politics until she moved to Frisco from Michigan with her family in 2015. "I'm dropping my daughter off at her new elementary school, and I pull in behind this white pickup truck that says, 'If you're not a conservative, you're in the wrong state' on the side," Ingalls recalled. "And I'm like, 'Okay, what did I just do?'" She called the county party office and started phone-banking for Hillary Clinton while her kids were at school.

Ingalls went on to campaign for other Texas candidates, but said she knew she was making mistakes along the way. "We gotta jump in and learn," she said. "We gotta do stuff that scares us a little – if we're gonna change stuff."

"I Don't Want to Give Up on Texas"

In July, I drove up to Liberty Hill with a group of six STM participants tasked with organizing and executing a canvassing operation in the Williamson County suburbs. We set up camp in a small office and ate our box lunches while sorting through maps of the surrounding neighborhoods – called turfs – and discussing regional politics.

"If I don't do everything I can, I just can't even look at myself in the mirror," Karan Shirk, a 64-year-old retired nurse from Austin, told me amid the bustle of preparation. Two years ago, Shirk moved on from her decades-long career to "resist full time." She started getting involved in judicial campaigns and the political action committee Battleground Texas. Now, she's hoping to run a campaign of her own – which, she admits, is probably "crazy," and is definitely "hard, hard work."

"With nursing, I could help a couple of people at a time when I was at their bedside, and I was a fabulous nurse," Shirk said. "You can help millions in politics, and really try to make things better for a lot of people."

Eventually, as previously recruited volunteers began to trickle in, we split into teams of two, distributed turfs, and headed out. I tagged along with Amy Schuh, a 47-year-old mom from Dallas, and Crystal Chism, a 36-year-old veteran from the same city. The two women had never crossed paths until joining STM, but were well on their way to building an easy friendship as we sweated our way through the flat streets of a new Leander development.

This was a basic voter identification operation; we were meant to visit homes where a likely Democratic voter lived and determine whether they might vote or volunteer for a Democrat in the future. Apparently the Democratic Party had never knocked on these doors before; under the full blaze of the July sun, it certainly felt like a rugged frontier.

"I'm a very passionate person; it's just about where I put my passion," Chism said. She's only been involved in politics for about a year, and the first campaign she volunteered for was O'Rourke's in 2018. Schuh is fairly new to Texas politics as well and points to December 2016 as the turning point for her.

"I was just a regular November voter," Schuh said. "And I thought that was plenty. I had no idea how much other stuff could be done that wasn't even radical, it was just basic involvement." Schuh started going to trainings and volunteering with Battle­ground Texas. Last year, she worked on Vanessa Adia's campaign, which fell short in its effort to unseat longtime U.S. Rep. Kay Granger, R-Ft. Worth.

I asked Schuh and Chism whether it was a little extreme to go from being politically inactive to aspiring to run campaigns within such a short period of time. "I think Trump makes you extreme," Chism said.

"Trump is extreme," Schuh agreed. "And everything that's happened in the past two years. I mean, fuck, the camps are extreme."

“I don’t want to give up on Texas like that and just assume we’re always going to be antiquated in our thoughts and beliefs. I think we’re headed toward another flip, like we had in the Sixties.” – STM participant Crystal Chism

Schuh and Chism's entry into politics, like many of their STM peers, is at least partially reactionary. But at its core, the project isn't about Trump; it's about flipping the Texas House. The general consensus within the TDP (and its new STM recruits) is that if the Texas House goes blue, so does the country. The oft-repeated figure is that Democrats are only nine seats away from victory. STM is a pilot program, but the state party hopes to continue and improve it in the future. According to Rahman, STM is "just a start."

"I think that you'll see this develop the next generation of Texas operatives that stay in Texas," Rahman said. "Because the old adage about Texas is that everybody who's an operative ends up going somewhere else, because Texas usually isn't in play. But now after 2018, we're seeing that Texas is the biggest battleground state in the country. And we plan on winning the House."

The new STM class members share his optimism. "I believe that there is a chance," Chism said. "I don't want to give up on Texas like that and just assume we're always going to be antiquated in our thoughts and beliefs. I think we're headed toward another flip, like we had in the Sixties." And, like every other participant I asked, she thinks that flip is going to happen in 2020. "Now," Chism said as we walked down a sun-baked driveway to our next stop. "The time is now."

A version of this article appeared in print on September 20, 2019 with the headline: Ready to Go Blue 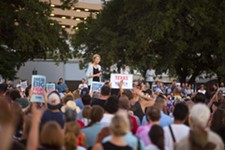