Trio of Candidates Vie to Take on Rep. Michael McCaul 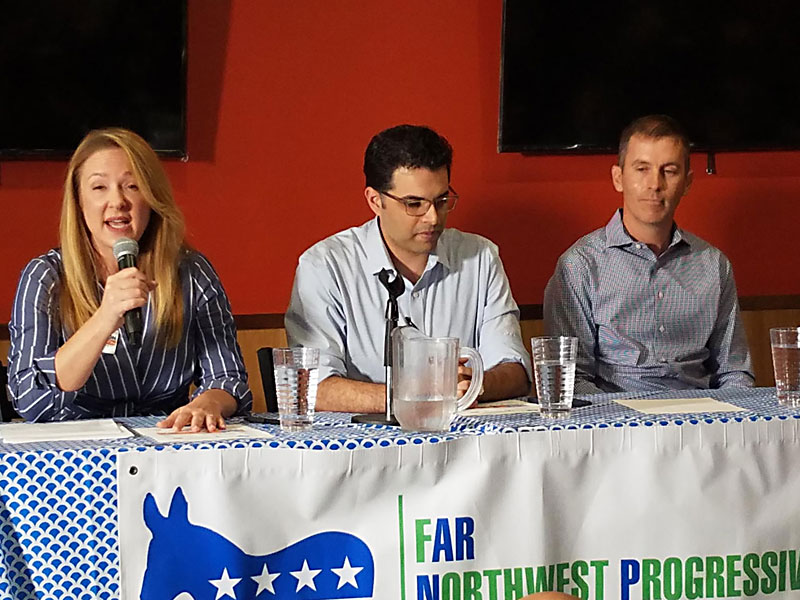 The Far Northwest Progressives Demo­cratic Club comes by its name honestly – not quite in Cedar Park, the group hosts its meetings near the intersection of FM 620 and Lake Creek Parkway. That's not quite at the northwest end of the 10th Con­gressional District, which reaches a fingerling up beyond Volente – while the bulk of the district stretches back 150 miles east to Tomball and the Houston suburbs, and south beyond Columbus, having been radically gerrymandered to gather as many rural and suburban Republican voters as needed to comfortably re-elect eight-term incumbent Michael McCaul – until 2018.

In that contest, Democratic challenger Mike Siegel reached within four percentage points of McCaul. The surprising result has enticed a couple more Democrats – Shannon Hutcheson and Dr. Pritesh Gand­hi – into the 2020 primary campaign. All three were hosted by the Progressives Mon­day night at the Charm BBQ Chicken restaurant, in a forum moderated by KXAN-TV political reporter Phil Prazan. Prazan posed the requisite questions on "governing philosophy," health care, gun violence, immigration, education ... and the candidates' responses, although differing in some details, defined a working range of the progressive spectrum of current Democratic policies.

Gandhi is a primary care physician, and emphasized his medical experience and his personal history in Houston and in Austin, where he has practiced with People's Com­mun­ity Clinic for several years. Hutcheson is a civil attorney with her own firm, and emphasizes her experience representing victims of violence and defending women's reproductive rights. Siegel is a former Austin assistant city attorney, educator, and labor organizer who points to his grassroots field operation as decisive in building a districtwide campaign. All three appear qualified to do the job – not a given in congressional races that sometimes attract an unwieldy scrum of amateurs (such as Siegel faced in the 2018 TX-10 Dem primary).

Siegel has the advantage of that campaign experience, and it showed in both his relaxed style (although all three candidates gamely endured reverberating microphones and a distracting bank of hyperactive TV monitors) and his anecdotal knowledge of the district. Over recent years, he's been actively involved in struggles over voting rights (Prairie View), health care (La Grange), and pollution (Fayette County). And he defined himself to the "left" (such as it is) on signature Democratic issues: he endorsed Medicare for All and the Green New Deal, while Hutcheson and Gandhi each described more incremental ways toward universal health care coverage, while supporting greater investment in renewable energy (Hutcheson), and a return to the Paris Accords and "zero net emissions by 2050" (Gandhi).

As for campaign profiles: Hutcheson emphasizes her working-class roots and her self-made professional career, co-founding her own law firm, and her long association with Planned Parenthood, the SAFE Alli­ance, and similar causes. Gandhi leans heavily on his medical service, especially to the uninsured and (often) undocumented, and thus also gaining insight on issues of inequality and immigration. Siegel reiterates that he has already, as a candidate now for three years, been standing up to help constituents who feel unrepresented by McCaul – emphasizing that whoever wins the office must engage in those struggles persistently, not just at election time.

There were some small but significant differences – as indicated, on health care and environmental policy – with Siegel often returning to his emphasis on activism (e.g., "fighting the NRA" on gun violence) and Hutcheson and Gandhi a somewhat stronger emphasis on changes in policy – mostly differences in nuance and in process. Occasionally challenged by Prazan with a reflexive "how would you pay for," for example, tuition-free higher education – Siegel responded that the $60 billion estimate would be readily defrayed by repealing the Trump administration's "trillion-dollar tax cut."

Speaking of Trump, Prazan asked for their positions on impeachment. Gandhi ("a whole list of impeachable offenses") and Siegel ("so many ways he's violated the law") said they'd support impeachment now, based on the already public evidence. Hutcheson said that while her "gut" has concluded the same, "speaking as an attorney" she wants a "full and complete investigation and public hearings" presented to Congress before formally endorsing it.

In perhaps the most important campaign question, Prazan asked if they would endorse and support whoever wins the Democratic primary. "Yes, without hesitation," said Siegel (joking that he would prefer his opponents join his campaign now). "Unequivocally yes," said Hutcheson, "more important than anything is to flip this seat." "Damn straight," concluded Gandhi. "Our American democracy depends on it."