After yet more deaths, Texas leaders vow to do ... something

Like most Chronicle readers, I welcome Lt. Gov. Dan Patrick into the ranks of gun control advocates. You might have missed it – bogus hurricane warnings and John Bolton's defenestrated mustache having saturated recent headlines – but the Lite Guv scored some coverage of his own last week, telling The Dallas Morning News that he thinks the time has come to require background checks on "stranger-to-stranger" gun sales.

"I'm willing to take an arrow" from the National Rifle Association, Patrick told the News' Robert Garrett – presumably, he would prefer not to have to dodge a few bullets, as have too many Texans recently in El Paso, Odessa, and Midland (and many venues less notorious). He got more than he could wish for from the numbskulls at the NRA, who immediately issued a statement invoking those gun-grabbing demons Barack Obama and Michael Bloomberg, and declaring, "Criminalizing private firearm transfers would require a massive, governmental gun registration scheme."

At one shot, the NRA assisted the media­-savvy Patrick in positioning himself ever so slightly to the left of the Republican mainstream on gun issues – still very far to the right of simple sanity, but a journey of 1,000 miles has got to begin somewhere. "Look, I'm a solid NRA guy," Patrick said, "but not expanding the background check to eliminate the stranger-to-stranger sale makes no sense to me and ... most folks."

Allow me a pianissimo note of skepticism. We await the substantive proposals supposed to be forthcoming from Patrick or from his frenemy, Gov. Greg Abbott, who has got to be ticked that with a single interview, Patrick grabbed the GOP momentum from Abbott's gun violence task forces, commissions, head-scratching about mental health, summary executions, etc. with a bold presumption: "Someone in the Republican Party has to take the lead on this."

In Search of Some Sense

The ever-optimistic Ed Scruggs of Texas Gun Sense, who is gamely participating in Abbott's latest "Texas Safety Commission" appointed to mull gun violence, welcomed Patrick's effusions. "Any talk about closing background check loopholes is positive," Scruggs said. If "any talk" becomes substantive legislative action by 2021 – our sclerotic state government's next scheduled official opportunity to do something, anything, after what will inevitably be another gun massacre or two, and many dozens of less-heralded gun deaths – it would undoubtedly be a belated victory for what even Patrick called "common sense."

The trouble with common sense, alas, is that if there were such a thing, everybody would have it – even our reflexively reactionary state leaders.

Been Here, Done That

The state's Democrats have not been silent in this latest moment of Texas tragedies, earnestly requesting the governor call a special session to address gun violence. Their specific, quite incremental remedies go beyond anything likely to be considered, let alone enacted, by GOP legislators, although No. 2 on their five priority items is in fact the closing of background-check loopholes like stranger-to-­stranger sales – which just might have served to obstruct the Odessa/Midland shooter, who reportedly had failed a legitimate background check but then bought his gun in a private sale. The other Dem proposals include: an "extreme risk" (aka "red flag") law (which may also have been applicable to the Odessa shooter); banning high-capacity magazines; limiting open carry of assault rifles; and most minimally of all, requiring the reporting of stolen guns to law enforcement.

It's unlikely the Dems will get their special session, and even less likely that it would result in positive outcomes. The recently adjourned 86th Texas Legislature did take action on guns: It made them easier to acquire, own, and carry, including at schools and churches. Why we should imagine that a special session of the same legislators – commonsensical, or mostly not – would do any better, remains obscure.

Patrick's declarations, like Abbott's roundtables (and in fairness, Democratic press conferences), are less about actual legislation than about political positioning in advance of next year's elections. GOP incumbents hardly want a "gun control" session that would either require them to gun-pander or else get primaried in May, nor would their Capitol intransigence on any restrictions help them next November. And they count on the sheer, relentless ordinariness of gun violence to (once again) wear down the public's attention, until the next mass shooting.

When that happens – and it will – expect another round of consternation, task forces, moments of silence, commonsensical declarations. Just don't expect anything to change for the better. 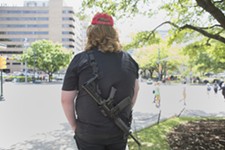 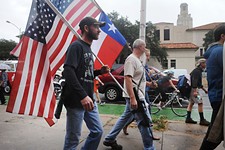