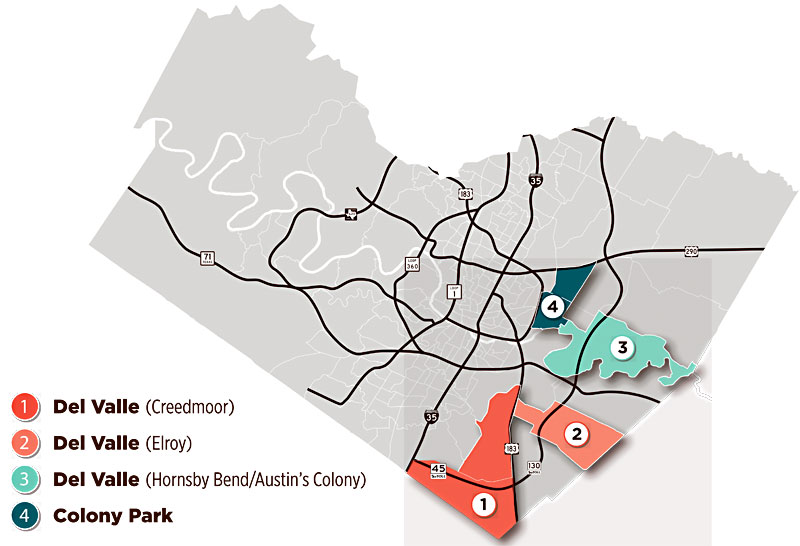 With past years' political fevers behind them and having been spared the lashings of an ill-tempered Legislature, Central Health rolls into its budget season with a proposed $291 million spending plan to pay for, in various ways, health care for nearly 200,000 Travis County residents. That's backed by a small wedge – around 4.5% – of the typical local homeowner's property tax bill (accounting for exemptions), or a little more than $300, or just over $23 more than last year, or a precise rate of 10.5573 cents per $100 valuation, or 6.9% higher than what the state now calls the "no new revenue rate."

Like Travis County and the city of Austin, Central Health could have built its fiscal year 2020 budget on a higher 8% tax rate; unlike them, the health care district was exempted from the Legislature's tax "reform" resetting that revenue cap at 3.5% in future years (or at least until the next session in 2021). As such, while Central Health is not exactly overflowing with cash, this year's budget is less stretched than it could be. (Before returning to the Chronicle, this reporter's consulting clients included the health care district.)

That's less likely to be so going forward, cautions Central Health President and CEO Mike Geeslin. "The [board of managers] asked our staff to look seven years down the road" in preparing the budget, he says. "Our patient population will continue to grow as it has almost every year, we will continue to expand health care services in underserved communities, and we'll receive fewer federal dollars to pay for local health care" due to the eventual – though already delayed – elimination of incentive programs that predate the Affordable Care Act, as well as the cloudy future of the ACA itself. "We have to look beyond next year and try to plan for the unexpected and make sure we maintain adequate reserves."

Last year at this time, the fiscal ground beneath Geeslin's feet trembled with uncertainty about Sendero Health Plans, the nonprofit insurer Central Health formed in 2011, which has required multiple capital infusions – $20 million last year – to stay in business offering plans on the ACA exchanges. Last year's politically freighted and ultimately successful push by community advocates to #SaveSendero rather than wind it down and cut Central Health's losses involved (ironically) moving some of the sickest people whose care is funded by the health care district onto Sendero plans so it could access more federal dollars. That strategy is working, Central Health says; the FY 2020 budget, as in previous years, includes funds ($7 million) to defray Sendero premium costs for those patients as well as others, such as Austin musicians.

While the Hornsby Bend plans represent a milestone for the district, Central Health simply writing a big check to build big clinics in the Eastern Crescent is not the only option.

Another point of contention for advocates, who have taken advantage of the fact that Central Health must get its budget and tax rate approved by the Travis County Commissioners Court, has been the scarcity of accessible health care on the ground in eastern Travis County. To help remedy that, the FY 2020 budget anticipates a $7.7 million capital investment in new clinic capacity for the Eastern Crescent, including developing the five-acre site in the Austin's Colony community in Hornsby Bend, which the district acquired over the summer.

This is on top of other initiatives – a new mobile clinic (operated by CommUnityCare, the safety-net clinic system that's also part of the Central Health "enterprise") that operates in Colony Park and Creedmoor; public services that are for now co-located with the Travis County Employee Health Clinic in Del Valle; nonclinical services at school campuses; medical transportation to existing clinics; even a pilot home-visit program in Austin's Colony – that Central Health has sponsored or planned or paid for out of its operating budget. The district expects to bite the bullet and issue debt to finance a Hornsby Bend clinic this fiscal year.

Geeslin notes that while the Hornsby plans represent a milestone for the district, Central Health simply writing a big check to build big clinics in the Eastern Crescent – the sort of statement asked of it by activists in past budget cycles – is not the only option. "When you look at providing services, there's often not just a single solution that will work," he says. "We have begun looking at property [for clinic sites] in a much more forward-looking fashion ... where the growth [is] going to be, but we're always going to be working with communities and advisers and listening to patients. Central Health is a funder, but it's also a convener."

Meanwhile, back in Downtown Austin, Central Health has the opportunity, but also the obligation, to do something useful and lucrative with the largely vacant 14.3-acre Brackenridge Hospital campus that it owns. Having opted for near-term cash in hand over the ambitious but riskier long-term private-public redevelopment deal it nearly consummated in 2017, Central Health has booked $13.7 million in lease revenue in the FY 2020 budget from Ascension Seton (which still uses the old Brack garage and the former Children's Hospital, now the Clinical Education Center) and, via a different partnership, UT's Dell Medical School, which has already released plans for a mid-rise tower to be built south of the garage. The proposed budget also includes capital funding for Brack demolitions – including the former hospital tower – and to reconnect Red River Street through the UT campus.

The board of managers is set to hold a budget hearing Sept. 11 and vote to adopt the budget Sept. 18, with the Commissioners Court giving its final blessing to the budget and tax rate later in the month.

A version of this article appeared in print on September 6, 2019 with the headline: Staying Out of Danger

Central Health Lays Out Its FY 2019 Budget
For your health