Point Austin: Is There a Lawyer in the House?

Legal opinions abound in the lead-up to November's elections 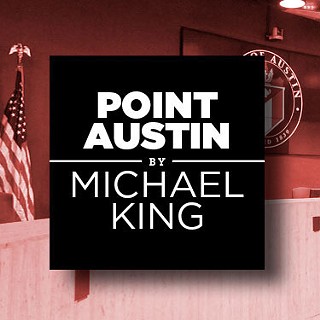 On Monday, City Council decided it would rather switch than fight, and amended the November ballot language for Proposition B – the petition-initiated referendum to block expansion of the Con­ven­tion Center and re-allocate the city's Hotel Occupancy Tax revenues to prioritize "Aus­tin's Cultural Tourism Indus­try" (i.e., not the Convention Cen­ter). The action (accomplished quickly, and mostly in executive session) responded to a ruling by the 3rd Court of Appeals that the ballot language adopted at Council's Aug. 8 meeting (in the early hours of Aug. 9) was misleading and incomplete.

The Monday afternoon meeting was certainly more tidy than the post-midnight session in which Council adopted the language later rejected by the court. That Aug. 9 discussion on the dais, before a few sleep-deprived witnesses, featured plenty of tension and confusion among Council members, as well as a brief performance by Bill Oliver lyrically proclaiming Austin's "unconventional" weirdness (although also celebrating the Convention Center-based South by Southwest Festival).

An even weirder moment occurred when Council members asked Bill Bunch – a drafter of the Unconventional Austin ordinance, and a chief funder (both from his own pocket and via thousands of dollars from the Save Our Springs Alliance, which he leads) of the petition drive to put it on the ballot – for legal advice. Bunch first attempted to raise a "point of order" from the audience – "We don't have such a thing," responded Mayor Steve Adler – so Alison Alter (and later Kathie Tovo) invited Bunch to explain his interpretation of the ballot language (concerning "sports and community venues"). The city's attorneys have a different interpretation, but they couldn't get a word in edgewise, and (at nearly 3am, after the mayor called it a fight for another day) the dais acceded to Bunch's reasoning.

A Number of Open Questions

Although Council members were divided on the underlying issues – with Alter and Jimmy Flannigan exchanging sharp words – only Natasha Harper-Madison explicitly questioned the wisdom of relying on Bunch's counsel. At the 3CA, where the city's language was challenged in a suit brought not by Bunch but by NAACP President Nelson Linder, it foundered for entirely different reasons, and the now-revised version reiterates the initiative's direction that 1) any major expansion of the Center be submitted to referendum; and 2) HOT revenues be reallocated to prioritize very broadly defined notions of "cultural and environmental tourism."

Though amusing, the ballot language episode is only the tip of the Prop B legal iceberg. As the 3CA footnoted, "the validity of the proposed ordinance" – that is, whether what Bunch and his Unconventional Austin partners have drafted is actually in accordance with state law – was not addressed by its ruling. Remaining in question, regardless of the voters' verdict, is whether 1) HOT spending on "cultural tourism" can be expanded beyond the 30% already prescribed in state law for cultural arts funding and historic preservation; and 2) whether the City Charter allows appropriations by referendum. The Unconventionalists say yes to both questions; the city's attorneys say no.

See You in Court

The petition's sponsors dismiss city legal as beholden to Council, but the same arguments are made by the attorneys at the Texas Municipal League – which not only specializes in advising cities on state law, but shares the League-wide interest in providing those cities with as much flexibility as possible on matters like HOT appropriations. Asked about these matters, TML Legislative Counsel Bill Longley noted that once a city hits the combined 30% cap (15% each for arts and historic preservation), "a city can not use the alternative categories for uses of the local hotel tax to circumvent the ... caps." (A few cities – not including Austin – enjoy special statutes allowing additional expenditures on things such as beach cleanups along the coast.) Longley also notes that HOT spending on "parks and recreation" facilities (e.g. Barton Springs) is specifically excluded, as is spending on any transportation system (e.g. a Downtown circulator, also contemplated by Unconventional Austin) to be used by the general public, other than one designed to carry tourists from hotels to defined tourist destinations.

Let the arguments commence. It would certainly be helpful to know, before we vote in November, whether the ordinance contemplated in Proposition B would actually be considered legal (knowing Austin's history at the 3rd Court of Appeals, it might well amuse the judges to rule the ballot language legal and the ordinance it proposes illegal). Also to be aired out in the coming months will be Uncon­ven­tional Austin's thus far undocumented accusation that the Convention Center expansion is in fact a sinister plot by the "multinational hotel industry" not to increase convention capacity, but rather to capture HOT revenue for itself. That's another weird Austin argument on hold for another day.