Abbott Doubles Down on Anti-Immigrant Rhetoric Even After El Paso 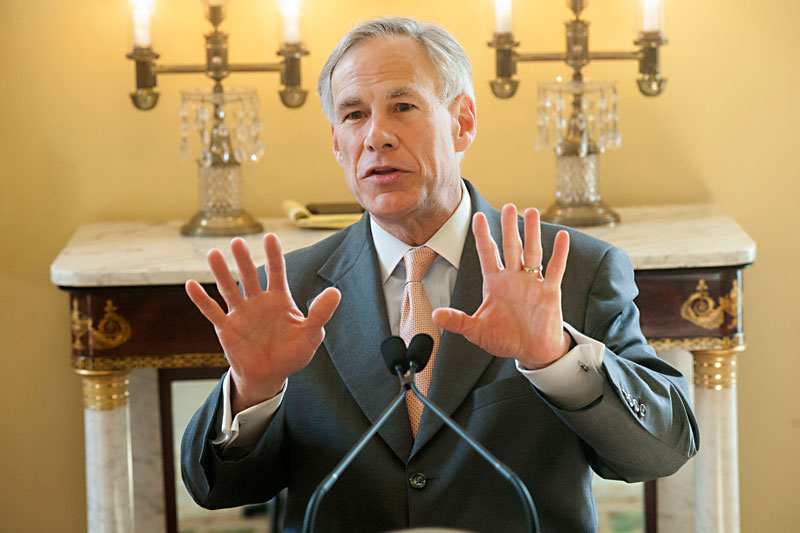 Just one day before a white supremacist gunman motivated by anti-immigrant rhetoric killed 22 people in an El Paso Walmart, Gov. Greg Abbott was busy stoking fear of immigrants. In a fundraising email dated Aug. 2, Abbott told his supporters to "take matters into [their] own hands" and "DEFEND" the state from immigrants at the border. Peddling the false narrative that immigrants are a largely dangerous population, Abbott wrote that Texans must "FIGHT BACK" against the media and liberals who stand idle "when innocent young Americans are murdered at the hands of those who should have never been in our country in the first place." He took aim at "radical socialists" like U.S. Rep. Alexandria Ocasio-Cortez, D-N.Y., and targeted U.S. House Speaker Nancy Pelosi, D-Calif., and Senate Minority Leader Chuck Schumer, D-N.Y., for refusing to do anything about the "crisis at our southern border." He concluded, "Unless you and I want liberals to succeed in their plan to transform Texas – and our entire country – through illegal immigration, this is a message we MUST send.'"

Texas Democratic Party Executive Director Manny Garcia called the letter "despicable" and "racist" – the kind of rhetoric that "fueled the hatred of a terrorist who drove 10 hours to murder members of the Latino community. ... This is not a game. It's long past time for Republicans to eradicate white supremacist language from their discourse – people are dying."

Even while drawing heavy criticism for the letter, Abbott doubled down on its message in a late-night tweet on Aug. 23, griping about the U.S. Supreme Court ruling in Plyler v. Doe that allows every child in the country, regardless of status, access to public education. He was responding to a "constituent" – more likely a bot – complaining that "I teach illegals all day long in public schools, where are the American citizens I should be teaching. Why are my tax dollars paying for illegals to be educated?" Abbott's agreement with this sentiment is "immoral and infuriating," said the Mexican American Legislative Caucus in a statement. "Texas reaps the social and economic rewards of educating ALL of its children. Since day one, Gov. Abbott has demonized the immigrant community, fueling the widespread hate toward our Latino family." On Twitter, all six legislators in the El Paso delegation clapped back at Abbott with an identical message: "Our community is trying to heal from racially driven violence. This hurts. It is dangerous."