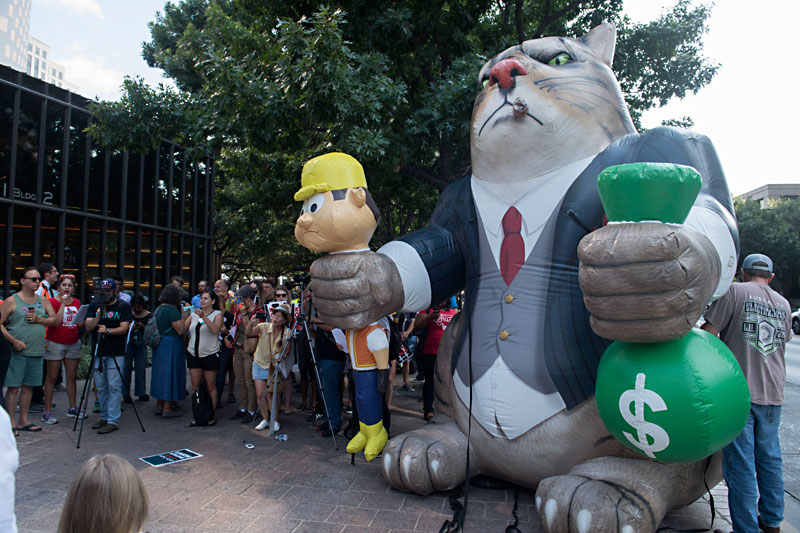 A nasty (and gas-filled) fat cat clutching his cash and throttling the working man set the tone for the "Unwelcome Reception" thrown by progressive protesters last week to taunt and troll the American Legislative Exchange Council (ALEC), as the right-wing bill mill held its annual meeting at the JW Marriott. Pick up next week's issue for our view from the ALEC trenches. (Photo by John Anderson)

He Has One? Lieutenant Gov. Dan Patrick, 69, received an arterial stent last week after chest pain sent him to a Houston hospital, where he presumably received emergency care underwritten by taxpayer-supported health insurance. A spokesman said Patrick was "feeling great" and intends to "raise awareness about this critical health issue." Not so much, we guess, for the millions of Texans without health insurance.

County Attorney Rodeo: County Court-at-Law Judge Mike Denton will retire on Sept. 13, making it all but official that he'll be announcing a campaign to succeed retiring Travis County Attorney David Escamilla. Due to state law, elected officials must step down to run for another office; Denton, Mayor Pro Tem Delia Garza, and County Court-at-Law Judge Elisabeth Earle are all expected to run, but can't announce without resigning their current positions. The only officially declared candidate is defense attorney Dominic Selvera.

Small Town Hacking: A "single threat actor" used a coordinated ransomware attack on Aug. 16 to lock up data from 22 entities in Texas – mostly "smaller local governments," according to the Texas Department of Information Resources. The state's IT agency says it's contained the problem and is working to bring the cities back online; there's much secrecy about which cities are involved, what data was targeted, and what ransom was requested, but this could be the largest such attack in U.S. history.

Another for TX-31: Add another name to the growing list of candidates for the Democratic nomination in Congressional District TX-31. Eric Hanke describes himself as a retirement counselor for public employees, and says he wants to "write the song of our country's future together."

Another Strikeout: Desperate for someone to run in TX-22 – incumbent U.S. Rep. Pete Olson is stepping down – the GOP courted former All-Star pitcher (and Longhorn) Roger Clemens, who took an intentional walk, saying: "The climate in politics at this time is much more than I would want to undertake ..."