Put that in your dyad and smoke it 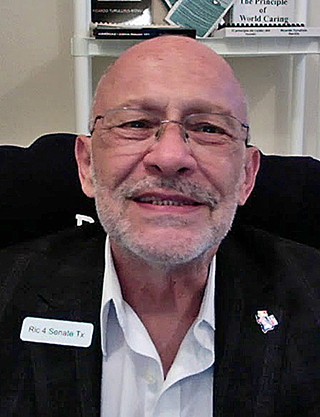 A few Austinites might recall Ricardo Turullols-Bonilla, an occasional AISD science teacher who ran for City Council (District 3) in 2014. (Among 12 candidates, he finished with 201 votes, or 1.9%.) For 2020, he's aiming a bit higher, running for U.S. Senate (as an independent) and for the Nobel Peace Prize (self­-nominated). In a YouTube campaign(?) video posted earlier this month, Turullols-Bonilla declaimed, "As US senate Tx and Nobel Peace Prize candidate my hope is that News Media play more than lobby role of Two Party system Elevate past story facts and unto narratives ideas G'd bless." (Note: He also apparently ran as an independent for Congress in TX-21 in 2018, and, two-party lobbyists that we are, we completely missed it.)

Turullols-Bonilla's video, nominally an analysis of the rambling, racist manifesto of the El Paso massacre shooter, takes up (all orthography his) "El Paso Shooter's Manifesto, Hispanic Jewry, Nobel PP, Senate Tx: PaRaDiSe!" The last word refers to Turullols-Bonil­la's self-published book (one of several) laying out his theory of "paradisism" (website in development), political "triads," and how the world can overcome misleading political "dyads" – apparently by contributing to Turullols-Bonilla's Senate campaign. He's also explicitly "post-modernity and proto-Kabbalah," as in The Principle of World-Caring (available on Amazon): "Without ProKabbalah, there's no Post-Modernity, and, without PostModernity, Kabbalah is veiled as occult science. Either we birth PostModernity with ProKab­ba­lah, or else grave with a prolonged Modernity."

Put that in your dyad and smoke it.

A version of this article appeared in print on August 23, 2019 with the headline: Turullols-Bonilla, for Paradise