The Texas House has managed to wrangle the Texas Rangers into the "Bonnenghazi" drama enveloping the Capitol. On Monday morning, Aug. 12, the House Committee on General Investigating voted to request the Rangers' Public Integrity Unit investigate the surreptitious June 12 meeting between House Speaker Dennis Bonnen, R-Angleton, and conservative activist Michael Quinn Sullivan, who has accused the speaker of bribery. The committee, chaired by Rep. Morgan Meyer, R-Dallas, convened at the Capitol only to promptly retreat into executive session for nearly an hour; when members reappeared, a quick unanimous vote was taken to open the Rangers' investigation, and the hearing was over within minutes – an anticlimax following days of swirling controversy. The hearing, prompted by committee Vice Chair Nicole Collier, D-Ft. Worth, ended with the caveat that the Rangers' PIU – created in 2015 to investigate crimes committed by state officers and employees, after that job was taken away from the Travis County District Attorney – should proceed "without regard to political consideration." Sullivan alleges Bonnen and his lieutenant Rep. Dustin Burrows, R-Lubbock, who chairs the House Republican Caucus, offered Texas Scorecard – the "media" (that is, propaganda) arm of his group Empower Texans – press credentials, which allow access to the House floor while the chamber is in session, if the right-wing org would target 10 GOP incumbents in the 2020 primaries. Given the deeply icy relations between the two, at first it seemed plausible that MQS (pronounced "mucus," as Sullivan is widely known around the pink dome) was making the whole thing up, until the right-wing firebrand revealed he'd recorded the meeting without the legislators' knowledge. Bonnen has apologized for "terrible" comments he made during the meeting, but has pushed back and not confirmed Sullivan's specific charges of an unethical and possibly illegal quid pro quo. Meanwhile, a handful of GOP state reps – including some among the 10 names on Bonnen's hit list – who have listened to what Sullivan purports is the surreptitious audio (in private at his lawyer's office) agree with MQS's version of events. Sullivan has yet to publicly release the audio, despite repeated demands by both Bonnen, House Democrats, media outlets, and others.

Amid the impending Rangers investigation, the Texas Democratic Party and state Rep. Ana-Maria Ramos, D-Richardson, who is said to have been mentioned during the conversation, have sued Sullivan in Travis County district court for at least nine campaign finance violations, as the backdoor meeting may have created an unregistered political action committee in violation of state law. The alleged quid pro quo discussion also occurred during a fundraising moratorium, the lawsuit notes. (Those violations amount to class A misdemeanors, punishable by a fine of up to $4,000 and a year in county jail. A straight-up bribery conviction carries a prison term of up to 20 years.) "Offering the granting of public benefits in a scheme to support the election or defeat of a candidate for public office, as was reportedly done here, is also illegal under state law and itself is a campaign finance law violation," the suit reads. 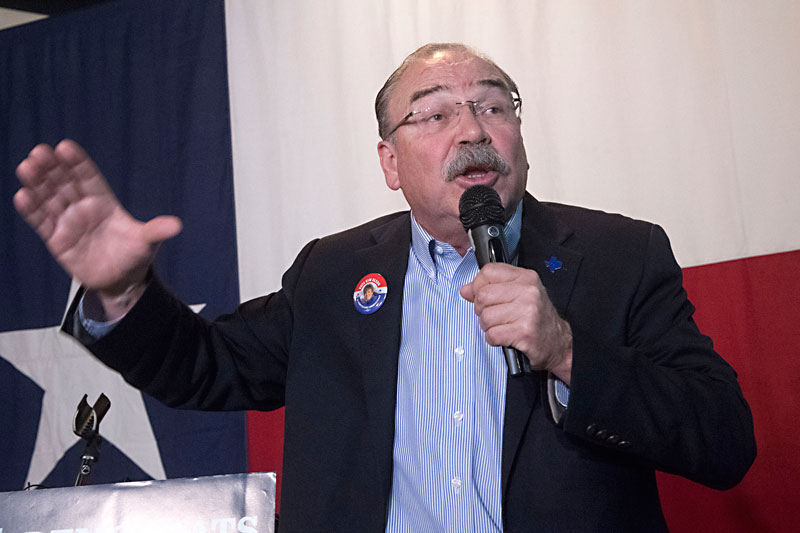 The TDP, which has asked for $100,000 in damages, is also calling on Sullivan to produce the recording, as well as all the communication between the men regarding the meeting. "Texans deserve to know what happens in their government on their dime, and that elected officials are getting their job done, not scheming to abuse power," said TDP Chair Gilberto Hinojosa. "These accounts of Speaker Bonnen and Repub­lican Chair Burrows' comments show they don't give a damn about the needs of Texans or the respect due to their fellow members elected by the people." With a GOP attorney general (Ken Paxton) under felony indictment and a GOP speaker (for now) under possible criminal investigation, it's not a bad time for Democrats to be using every opportunity to point out the massive failure of Republican leadership.