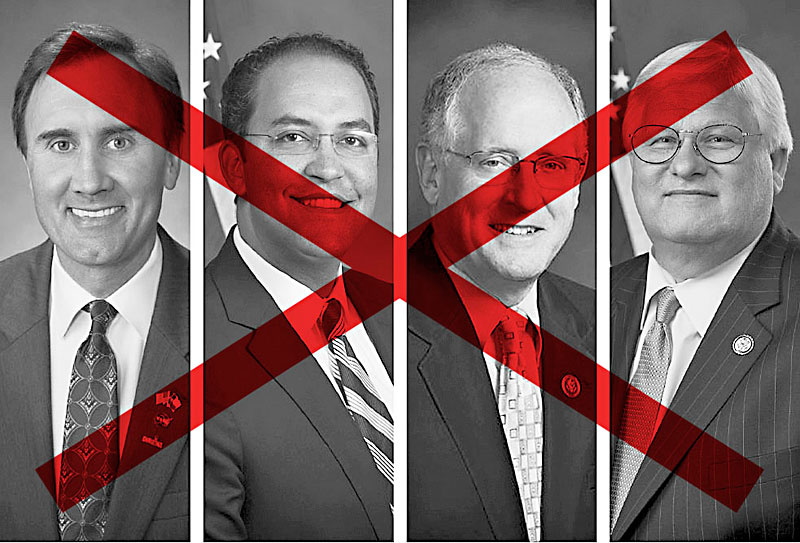 The Democrats are calling it "Texodus" – the rising number of Texas Republican congressional incumbents who are announcing they'd rather step down than face competitive reelection campaigns in 2020. First to retire was TX-22 incumbent Pete Olson, R-Sugar Land, a six-term incumbent best remembered for spouting Infowars-style conspiracy theories about President Bill Clinton on the airwaves. In July, the former Sen. John Cornyn staffer announced he would leave to his successor the task of "preserving our exceptional nation."

Olson's lead has been followed by Will Hurd, R-Helotes, Michael Conaway, R-Midland, and this week, Kenny Mar­chant, R-Coppell. By no coincidence, three of the four – Olson, Hurd, Marchant – represent districts (TX-22, 23, and 24) already targeted by Democrats as winnable seats in next year's elections.

Hurd was likely the most vulnerable, in the border district that runs from San Antonio to the edge of El Paso, which he won by only 926 votes in 2018. His challenger, Gina Ortiz Jones, is running again in the Democratic primary. Hurd is reflexively identified as "the only African American Republican in the House," and he has tried to walk his own path in an increasingly polarized and Trump-addled Congress – he was one of only four Republicans to vote to condemn Trump's racist attacks on four Democratic congresswomen of color.

Conaway's West Texas district is one of the reddest in the nation – in 2018, he won with more than 80% of the vote – and his departure is unlikely to alter the 2020 balance. But Marchant's suburban Dallas district has been trending purple, moving from double-digit GOP margins to the 3% victory he eked out in 2018. The string of retirements make the decision of the Democratic Congressional Campaign Committee to establish an Austin office seem prescient, and DCCC Chair and U.S. Rep. Cheri Bustos, D-Ill., was quick to cheer Marchant's announcement.

"The DCCC started this cycle by going on offense," Bustos said, "and the reality for vulnerable Washington Republicans of defending their deeply unpopular health care repeal agenda is setting in for Republican incumbents." The likelihood of either losing a difficult race or serving another powerless term in the House minority is a discouraging prospect for GOP incumbents, and sources in the DCCC suggest that GOP Reps. Michael McCaul (TX-10) and John Carter (TX-31) might also be reconsidering their 2020 plans. Several Dem­ocrats have lined up to challenge Carter, and one of them, Dr. Christine Eady Mann, said she's heard no rumors of Carter's plans but "wouldn't be surprised if he sees the writing on the wall" and decides to retire. He's shown little interest in campaigning, Mann said – hosting only a handful of scripted, low-attendance town halls – and 2018 was his first campaign in which he needed financial help from the national GOP. (He beat MJ Hegar, now running for Senate, by less than 3%.)

A Texas Democratic congressional majority remains a long shot – Dems currently hold 13 of 36 seats – but the string of retirements in competitive districts, along with shifting suburban demographics, have made Democratic gains in Congress (and also in the Texas Legislature) much more likely. If any more GOP incumbents are hankering for home, Dem odds could get even better.