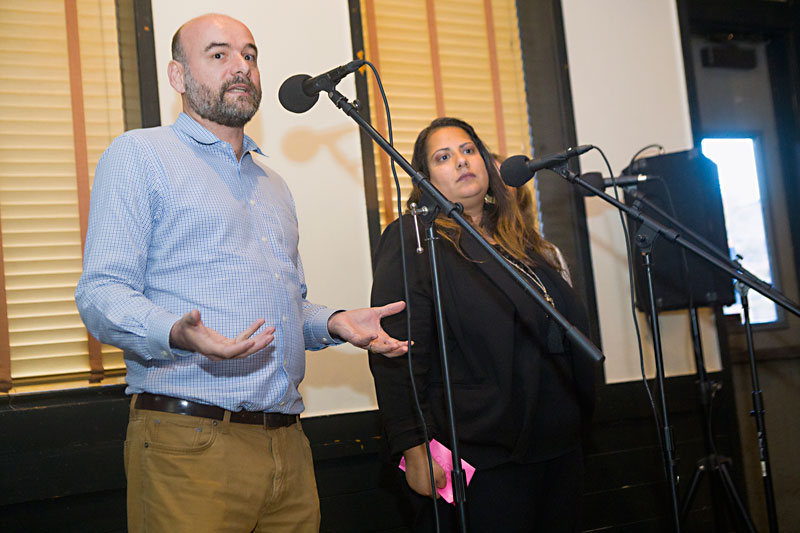 Local immigration attorneys Chito Vela (l) and Pooja Sethi, along with Casa Marianella Executive Director Jennifer Long, speak to the Liberal Austin Democrats Monday, Aug. 5, at Scholz Garten about Trump's border crisis and what folks can do to help. For the archived livestream of the event, check out LAD on Facebook. (Photo by Jana Birchum)

Dog Days of Summer: Cronk also hired the Humane Society's Don Bland to take over Austin Animal Center – a move not cheered by animal advocates who had demanded the manager reopen his hiring process. A more pressing danger: Two dogs are confirmed to have died after encountering toxic blue-green algae in Lady Bird Lake near Red Bud Isle.

You're Not Welcome: "I declined the invitation to accompany the President because I refuse to be an accessory to his visit," U.S. Rep. Veronica Escobar, D-El Paso, said in anticipation of Trump's (uninvited) fly-in after the weekend's massacre. "I refuse to join without a true dialogue about the pain his racist and hateful words and actions have caused our community and this country."

Naming and Shaming: Republicans denounced U.S. Rep. Joaquin Castro, D-San Antonio, for tweeting the (publicly available) names of 44 people from his hometown who made maximum donations to Trump's presidential campaign. Castro said the donors were "fueling a campaign of hate"; Republicans accused him of encouraging harassment or violence against private citizens. Wanna know who should be ashamed in Austin? Go to www.fec.gov and scroll down – you'll see a link to Trump's (and everyone else's) searchable donor lists.

One HOT Potato: City Council appeared poised to vote Thursday to authorize raising Austin's Hotel Occupancy Tax by 2%, to the maximum level allowed by state law – thereby claim-jumping a proposal by Travis County to do the same. The city intends to use the funds to expand the Convention Center, while the county wants to upgrade the Expo Center.

News About News: GateHouse Media, owners of the Statesman, is buying Gannett in a $1.4 billion deal and cutting $300 million in costs per year. The new company, America's largest newspaper publisher, would control 260 daily papers and more than 300 weeklies. As history has shown, media consolidation threatens diversity, localism, and quality journalism.