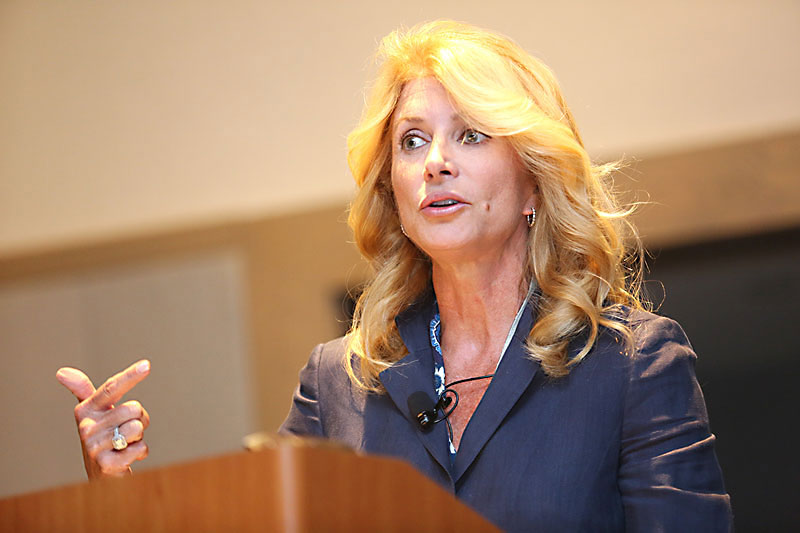 After weeks of speculation – and a premature leak to the Statesman last week – former state Sen. Wendy Davis announced via a campaign video on YouTube that she will indeed be seeking to unseat U.S. Rep. Chip Roy, R-Dripping Springs, in 2020. "I'm running for our children and grandchildren," she says in the video, which begins with a recorded tribute from her late father Jerry Russell, founder of Fort Worth's Stage West theatre company, who died in 2013.

The announcement has been expected for some time, although Davis has reflexively responded that she would decide "soon" on entering the TX-21 contest. Then last week, an aide to U.S. Rep. Filemon Vela, D-Brownsville, told Statesman reporter Matt Zdun that Davis is indeed running.

If she wins in the March Democratic primary, Davis will face the freshman incumbent, who narrowly prevailed last year in his race against Joseph Kopser to succeed retiring Lamar Smith. Roy promptly released a statement denouncing Davis as "the darling of Planned Parenthood, NARAL and the far Left." Two other Demo­crats have also announced 2020 campaigns: Bruce Boville confirmed to the Chronicle Monday that he would leave the field to Davis, but Jennie Lou Leeder plans to stay in the race. "I'm glad that she finally announced so that we can talk about the issues that are important to our district," said Leeder. "I look forward to a very robust primary." (In 2018, Leeder, then chair of the Llano County Democrats, ran against TX-11 incumbent Mike Conaway, R-Midland.)

The Texas Tribune commented Monday: "The potential Davis-Roy matchup is likely to be among the most polarizing races the state has seen in recent years. Davis is a fierce national advocate for abortion rights, while Roy has built his reputation in his first six months in Congress as a conservative firebrand." In May, the former aide to U.S. Sen. Ted Cruz garnered headlines for his obstruction and delay of a disaster relief bill that included $4 billion intended for Hurricane Harvey reconstruction. (It eventually passed.)

Since her defeat in the 2014 governor's race, Davis became the founding director of Deeds Not Words, a nonprofit advocacy organization that works "to empower and activate the voices of young women in public and political discourse." As a state senator from 2009 to 2014, Davis represented her hometown of Ft. Worth, where she had previously served on the City Council. She currently lives in Austin's Clarksville neighborhood, at the northeast tip of TX-21, which stretches westward through the Hill Country and south to San Antonio.

On Tuesday evening in D.C., House Speak­er Nancy Pelosi and several other prominent Dems, including most members of the Texas delegation, hosted a fundraising reception for Davis and her campaign. Earlier on Tuesday, Davis' campaign announced she'd raised $250,000 online in the 24 hours following her announcement.

And on the Eastern Front ...

It's no longer news that Texas is now considered a swing state, and the unprecedented arrival in Austin of a regional team from the Democratic Congressional Campaign Committee is a visible sign of the national party finally taking Texas politics seriously. The DCCC has identified six Texas districts as priorities, three of which include parts of Austin: TX-21, now being contested by Wendy Davis; Williamson County-based TX-31, contested in 2018 by MJ Hegar, now running for U.S. Senate; and TX-10, where three Democrats have declared in the primary race to take on eight-term GOP incumbent Michael McCaul.

The Democratic Congressional Campaign Committee has identified six Texas districts as priorities, three of which include parts of Austin.

First in line is Mike Siegel, the former assistant Austin city attorney who put a surprising scare into McCaul in 2018, losing by only four percentage points in a district accustomed to default double-digit GOP victories. On the way, Siegel defeated six Democratic rivals in the primary. He's proud of his run, determined to repeat it, and a bit disappointed that he's now facing two rivals who he says supported him in 2018, even if he can take credit for putting TX-10 into play.

"Nobody thought this district was winnable," he says. "Because of my work, there are now three major candidates [in the primary race]." Siegel is also a former union organizer, and says his campaign is distinguished by its extensive grassroots network across the district, as well as his relentless activism. He cites his defense of voting rights at Prairie View A&M, St. Mark's Medical Center in La Grange, and his recent work on behalf of Dock Jackson's election to the Bastrop City Council. "That's how we build a lasting movement for change," he said, emphasizing the importance of focusing on more than winning just one election.

Pritesh Gandhi is a doctor, the associate chief medical officer of People's Community Clinic. Originally from Houston and The Woodlands, for the last four years he's lived and worked in Austin, and says his community engagement on both ends of the radically gerrymandered TX-10 will serve him well in the campaign. He says that in the last couple of years, he's been alarmed by changes in his clinic patients, many of them immigrants. "The nature of their trauma changed, and their stories changed." They're more afraid and their children are anxious, he says, and they miss appointments for fear of immigration authorities – so they're more subject to illnesses due to neglect.

"This wasn't a choice for me," Gandhi says of his decision to run. "I had to do this because of the situation our nation finds itself in. ... I have a voice. If I didn't use my voice, I would be doing an injustice to all of these people." Gandhi says he's now devoting 30 hours a week to the clinic and 60 hours to the campaign. He believes he can build a coalition of support across all of TX-10 because his campaign is "a reflection of my entire life's work in the community."

The most recent entry into the TX-10 race is Shannon Hutcheson, an attorney with her own firm, who introduced herself at the June 30 campaign finance deadline with $276,000 cash on hand. (Gandhi held $264,000, Siegel $124,000.) A June 27 story in The Intercept suggested, on thin evidence, that Hutcheson had been recruited by the DCCC as a deep-pocketed alternative to Siegel. In fact, she says, she had looked at Travis County judicial races before a conversation with Austin political consultant Genevieve Van Cleve convinced her she was more interested in national policy matters. (Van Cleve, now Texas director for the All on the Line campaign of Eric Holder's National Democratic Redistricting Com­mit­tee, confirmed the account.)

Hutcheson's campaign is in its infancy, but her online biography emphasizes her working class roots and her extensive work for Planned Parenthood. "I understand what it's like to eat your free lunch at school," she told the Chronicle, "and to have to move because you can't pay the rent. ... I've spent eight weeks going back and forth across the district, and people are responding to me as someone who can relate to them."

Like Siegel and Gandhi, Hutcheson emphasizes health care – including reproductive health care – as a major policy priority. Early on, there appear to be differences only in emphasis among the three candidates. (Siegel firmly supports Medicare for All; the others are less absolute about how best to achieve universal coverage.)

A more visible distinction may quickly become access to resources: Siegel disdains what he considers the DCCC's exclusive focus on money and consultants, while Gandhi says that whoever runs in TX-10 will need considerable financial backing and that he and Hutcheson appear to have more of it. "To me," counters Siegel, "the field is where the magic works. ... Whoever runs against McCaul has to excite the base, create a major field operation, and turn out the vote. I know how to do that."