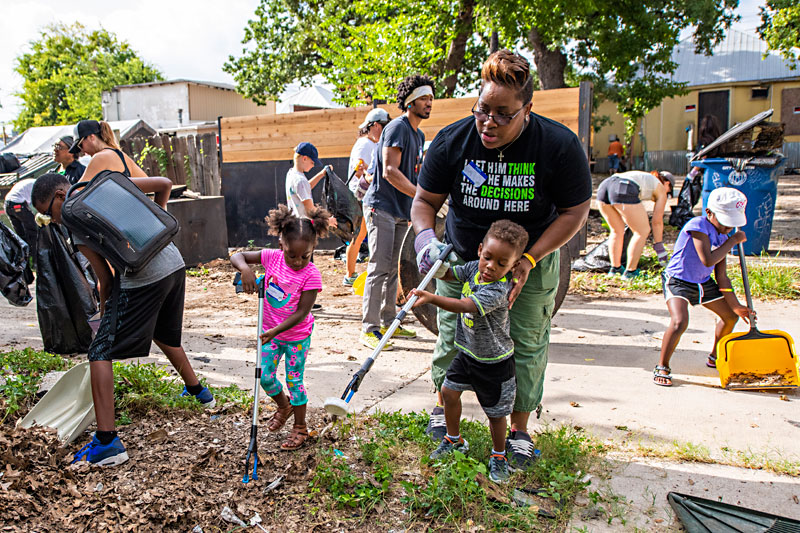 Austin Black Pride and Raasin in the Sun led a community cleanup Sat., July 20. Together with volunteers they beautified the alley at 12th and Chicon. (Photo by David Brendan Hall)

County Counting Coins: Travis County's preliminary FY 2020 budget was released this week, totaling $1.09 billion, a 9.7% increase over last year's Commissioners Court-approved budget. Public and court discussion of the budget will follow over the next two months.

We Salute You: After 18 years at KUT/KUTX, Hawk Mendenhall plans to retire on Dec. 31. The longtime program director joined the station before it offered local news programing, and KUT 90.5's Director Debbie Hiott called Mendenhall "instrumental" in the creation of the station's newsroom and launching both KUTX 98.9's all-music channel and Texas Standard.

Expanding Expedited Removal: In Trump's ongoing war against immigrants, the administration published a new rule this week allowing ICE agents to bypass immigration court and deport undocumented immigrants who can't prove they've lived in the U.S. for two or more years. The ACLU has promised a lawsuit.

Something We Don't Know: Former special counsel Robert Mueller testified Wednes­day before two U.S. House committees – Judiciary and Intelligence – on the substance and background of his investigation of President Trump and Russian interference in the 2016 election. While Mueller burned, Trump tweeted ...

No take-backs: Wednesday morning, a San Antonio federal court declined to re-impose advance scrutiny ("bail-in") of state redistricting under the Voting Rights Act, despite evidence that Texas officials have repeatedly drafted maps (and engaged in other conduct) aimed at disadvantaging minority voters. An appeal is likely.

LOUD Republican Noises: Travis County GOP chairman Matt Mackowiak this week filed an ethics complaint against CM Natasha Harper-Madison for fundraising to retire campaign debt at a time not allowed by local ordinance. The party's most recent City Hall resident, Don Zimmerman, sued the city (and won!) so that he could do this very thing that the Travis GOP thinks is scandalous.