Survivors also calling on lawmakers to intervene following the appointment 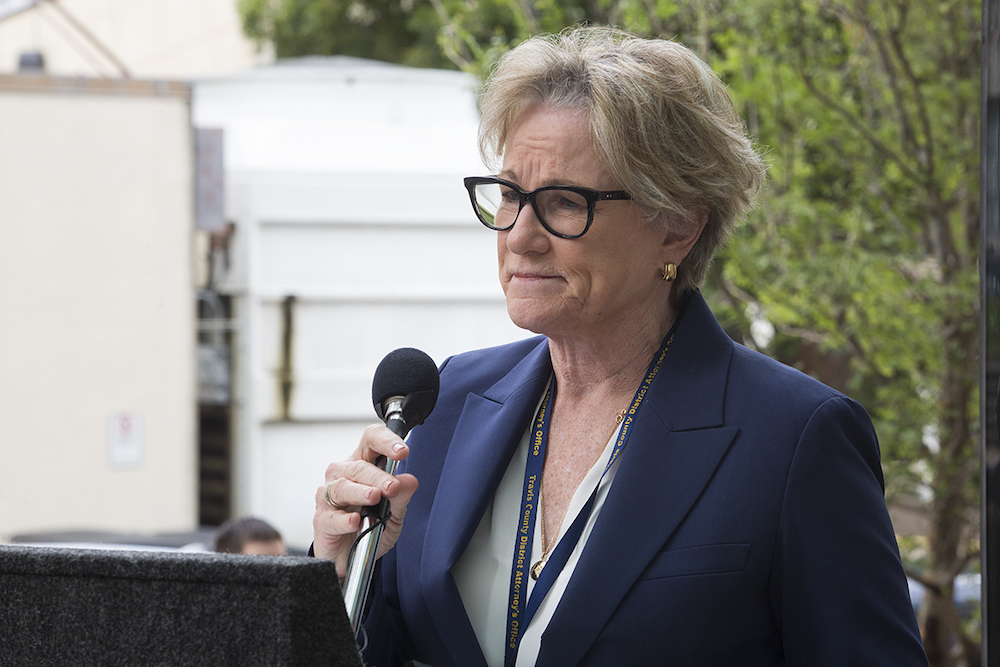 Travis County District Attorney Margaret Moore has resigned from the not-yet up and running statewide Sexual Assault Survivors Task Force. The Statesman broke the news Friday evening after receiving a copy of Moore’s resignation letter, sent to Texas District and County Attorneys Association President Jarvis Parsons. Moore – whose appointment to the task force caused major upset among rape survivors, advocates, and the D.A.’s March 2020 primary challengers – wrote that while she “genuinely care[s] about this endeavor,” she also recognized that “my anticipated participation has caused too much attention to be paid to my appointment and not enough attention to the work that needs to get done.”

Later Friday evening, Newsy’s Mark Greenblatt – who helped uncover the Austin Police Department’s overuse of exceptional clearance rates in rape cases last fall – reported that Moore’s resignation came shortly after the national outlet began asking questions regarding a letter written by Moore during the early days of her career as a prosecutor. The letter, which the Chronicle has obtained, was sent from Moore to her boss at the time, former Travis County D.A. Ronnie Earle, requesting to be transferred out of the unit that prosecuted sexual assault cases.

On Monday, Moore declined to comment on her decision to resign.

Advocates, candidates, and survivors are calling on lawmakers to intervene following Travis County District Attorney Margaret Moore's appointment to the new statewide Sexual Assault Survivors Task Force. Moore, who told media on Tuesday that she's "excited to be part of this initiative," is a defendant in the sexual assault survivors' lawsuit against Austin, Travis County, local law enforcement, and the D.A.'s Office, alleging that systemic mishandling of sexual assault cases has violated the civil rights of women survivors.

The SASTF is designed to collect data, analyze gaps in the justice system, and promote best practices in preventing, investigating, and prosecuting sexual offenses across Texas. Created with the passage this year of House Bill 1590 by Rep. Donna Howard, D-Austin, the SASTF has been heralded as a major win for rape survivors – among whom Moore's appointment to the task force by the Texas District and County Attorneys Association has caused much concern.

Julie Ann Nitsch, a plaintiff in the survivors' lawsuit, told the Chronicle the SASTF offers an "opportunity to change the way survivors are treated and stop the prevalence of sexual assault in Texas – but not if the person representing the prosecution is someone that doesn't seem to believe rape is a prosecutable crime." Nitsch cites Moore's past comments that nonconsensual sexual "incidents" involving acquaintances are better seen as "traumatic occurrences" that do not rise to the level of sexual assault.

The TDCAA, which the statute grants a seat on the task force, confirmed to the Chronicle on July 18 that its president Jarvis Parsons appointed Moore a week prior. When asked about the suit, TDCAA Executive Director Robert Kepple said that it didn't "come into play for us." Kepple called Moore an "obvious choice," noting that she's been "very active" in addressing sexual assault and "enthusiastic" about improving prosecution rates for sexual assault cases.

That view is not shared by Moore's challengers in the 2020 primary, Erin Martinson and Jose Garza. Martinson, who's spent nearly two decades fighting for the legal rights of survivors, said "Moore's office has a highly publicized track record of mishandling sexual assault cases," while Garza told us he believes the Travis County delegation – including Howard and HB 1590's Senate sponsor, Kirk Watson, D-Austin – "needs to demand that the District Attorney be removed" from the SASTF because "it's disrespectful to survivors of sexual assault."

Watson said he "understand[s] concerns" about Moore serving on the task force while the lawsuit is pending, but noted that HB 1590 specifically does not give him, Howard, or other legislators control of SASTF appointments "because we wanted to keep politics out of the process." The senator added that he'll be closely monitoring the SASTF and its steering committee (which includes advocates for survivors) "because this has always been, will continue to be, and must be about survivors."