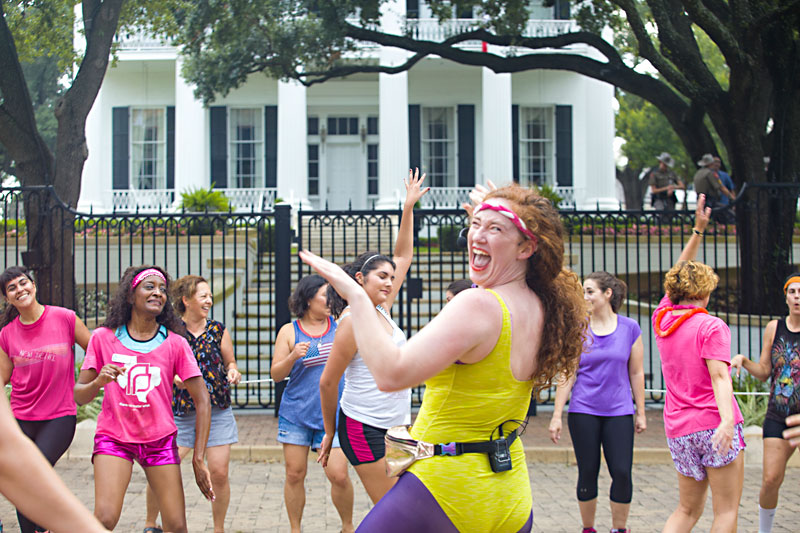 Erica Nix, Austin's most vibrant personal trainer and queer workout guru, teamed up with Planned Parenthood to lead Exercise Your Rights – a reproductive rights protest – outside the Governor's Mansion Monday evening. Despite threats of rain, dozens of legging-clad folks raised their heart rates in the name of abortion access for all. (Photo by Jana Birchum)

Cash for Keys: Six officials at Southwest Key, the local nonprofit under scrutiny for running migrant child shelters, earned more than $1 million in 2017, while former CEO Juan Sanchez earned $3.6 million, according to The Washington Post. Sanchez resigned earlier this year after criticism over his hefty paycheck and involvement in housing children who've been ripped from their parents.

It's a Health Issue: After public pressure from local reproductive health supporters, the Mineral Wells City Council tabled, by a 5-2 vote, its mayor's request for the city to study a resolution to outlaw abortion. The anti-choice proposal comes shortly after East Texas town Waskom passed its own ordinance outlawing the procedure.

Philosophical Differences: After less than a year on the job, Planned Parenthood ousted President Leana Wen Tuesday due to what Wen called "philosophical differences" between herself and the organization's board of directors.

Rest in Peace: Retired Supreme Court Justice John Paul Stevens died Tuesday in Fort Lauderdale. He served on the court for 35 years as a moderate Republican who steadily "moved left" – or stayed true to principles of justice while the court moved rightward. Stevens was succeeded by Justice Elena Kagan.

Another Lawsuit: The ACLU, Southern Poverty Law Center, and Center for Constitutional Rights filed a federal lawsuit challenging Trump's latest move to bar most Central American migrants from seeking asylum in the U.S., arguing that the restriction, in effect since Tuesday, inflicts "maximal cruelty."

My House? Austin Resource Recovery will expand its composting service to 53,000 additional households, added to the 95,000 households already served – roughly three-quarters of the city's homes. Pending additional funding, ARR hopes to extend to all households next year. More information at www.austintexas.gov/austincomposts.