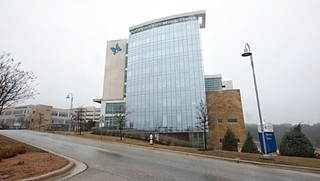 The troubled financial history of the Lakeway Regional Medical Center (now Baylor Scott & White Medical Center – Lakeway) took another turn last month, as the U.S. Depart­ment of Justice settled fraud claims against some of the initial investors for $1.1 million. Millions in additional claims remain unresolved, and the settlement agreement reflects an open investigation against the remaining original investors in the private for-profit hospital. The Chronicle has been following the LRMC story for several years, in connection with its coverage of the Texas Medical Board case of neurologist Dr. Robert Van Boven, who believes LRMC management retaliated against him after he accurately reported violations of medical standards (and related financial matters) to state and federal authorities.

Under the settlement announced June 12, seven corporate entities and executives – Pacific Medical Buildings LLC (PMB), PMB Lakeway LLC, RD Development Partners LLC, Lakeway Management LLC, J&L Rush Family Partnership LP, Jeff Rush, and Brad Daniel – "agreed to pay the U.S. $1.1 million to resolve allegations that they violated the False Claims Act by improperly helping to obtain a loan insured by the Federal Housing Administration (FHA) and receiving impermissible distributions of [LRMC] project funds." That 2012 FHA/Housing and Urban Development (HUD) loan was for $164 million, granted via a program encouraging hospital development in underserved areas. Despite this purported need for hospital care in one of Texas' wealthiest communities, admissions were lower than expected. In 2013, LRMC and its investors defaulted on the loan, and HUD auctioned its interest to real estate investment trust MedEquities Realty Trust Inc. for $50 million. MedEquities leased the real estate back to LRMC as a tenant, but in 2016, LRMC sold its interests to Baylor Scott & White for $72 million.

While a DOJ spokeswoman refused to comment on what the settlement describes as an ongoing investigation, Assistant Attorney General Jody Hunt of the DOJ's Civil Division said in a press release, "We will continue to hold responsible those who knowingly violate these [loan] requirements and waste critical program funds." Under the settlement, the LRMC investors disagree with DOJ's version of events and admit no liability.

The agreement releases the companies and their executives from further U.S. "civil or administrative monetary claim," but not from claims for tax or criminal liability, nor does it release "any liability of individuals and entities not named herein." Based on the available documentation, investor groups not covered by the settlement include PMB Lakeway Medical Plaza LLC, LRMC Hospital Management Company LLC, and Surgical Development Partners LLC, as well as members of the hospital's current board of directors under Baylor Scott & White.