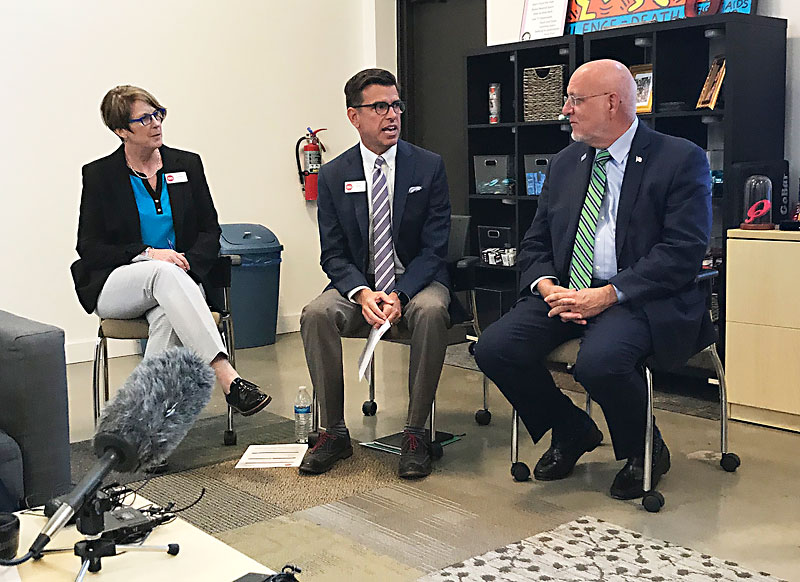 Dr. Robert Redfield believes we are on the verge of eliminating HIV in the U.S. – with the right leadership. The director of the Centers for Disease Control and Prevention, along with other federal public health leaders, visited AIDS Services of Austin's new Eastside location on Tuesday, July 16, to discuss Austin's efforts to reduce HIV transmission rates here and how they can light the way for the rest of the nation.

Last summer, Austin and Travis County joined the Fast-Track Cities Initiative, with the goal of eliminating new HIV infections by 2030. Benchmarks of progress toward that goal – to be attained by 2020 – include 90% of all Austinites living with HIV knowing their status, 90% of those diagnosed with HIV infection receiving sustained treatment, and 90% of those on treatment having an 'undetectable' viral load (meaning they cannot pass the virus to others). As we reported last July, it's an ambitious goal for a city that sees roughly 250 new cases annually. It's estimated that more than 17% of Central Texans living with HIV are unaware of it.

Then, in an unexpected turn of events during his State of the Union speech in February, President Trump announced his Ending the HIV Epidemic Strategic Initiative to snuff out the disease nationally within 10 years, with a $291 million proposed budget. For the first phase of this initiative, the U.S. Department of Health and Human Services included Travis County (as well as Bexar, Dallas, Harris, and Tarrant) on a list of 50 places that accounted for more than 50% of new HIV infections nationwide in 2016 and 2017. Those places will receive "additional expertise, technology, and resources needed to end the HIV epidemic," including the visit by Redfield and his team.

"We're here to help motivate, encourage, listen," said Redfield, who's spent more than three decades working in HIV clinical research and care. Pointing to cities such as Washington, D.C., and Baltimore that have achieved great reductions in new HIV transmissions, Redfield added: "We're here to emphasize to leadership that this is not a D.C. plan or a CDC plan. ... It's got to be an Austin plan." And one that Redfield hopes will be "disruptively innovative."

Innovation is what AIDS Services of Austin is hoping to achieve. According to ASA Executive Director Paul Scott, the organization opened its Springdale Road location (which offers food bank services, medical and PrEP support, and condom distribution) nine months ago to better reach Austinites at high risk. Throughout the country, the rise in new HIV infections is especially pronounced among Black and Latinx men; ASA's focus is largely on the Latinx community, which makes up 38% of the organization's clients and accounted for nearly 40% of new HIV cases in Austin in 2017. Scott noted that Austin's rapid gentrification, which continues to push marginalized residents out beyond the city limits, has made it more difficult to keep people linked to care.

Another barrier, according to ASA's Ana Herrera, is immigration status. One patient, she said, came to ASA's Moody Medical Clinic in North Austin while her husband was out of town looking for work. Though the woman knew she was living with HIV, her husband dissuaded her from seeing a doctor for fear that her undocumented status would be discovered. (Scott noted that anonymous testing is available.)

Calling the initiative a "real opportunity to think of a way to do this," Redfield urged Austin stakeholders to bring new voices to the table and emphasized the importance of engaging those under 35 (who make up 65% of those newly infected with HIV in Central Texas). "You can become paralyzed by obstacles, or keep your eye on the goal line."