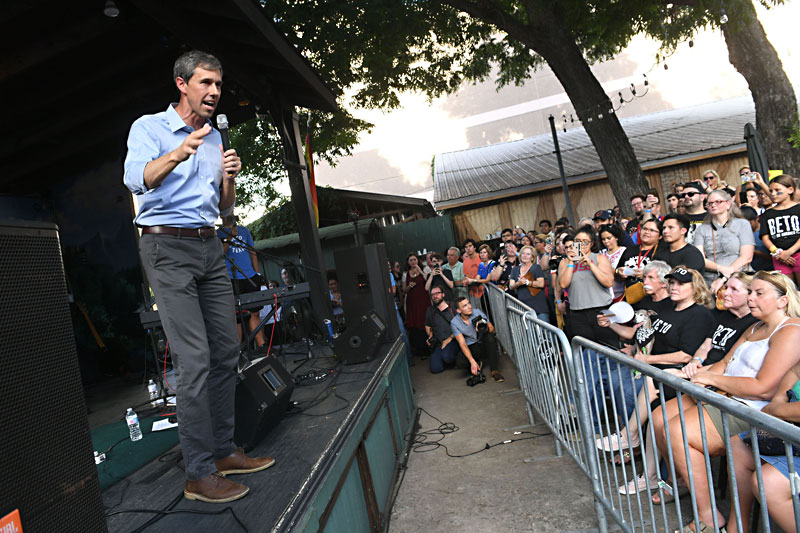 He's not "the other Texan" in the 2020 Democratic presidential primary – "I am the Texan in this race." And thus Julián Castro summed up his message of the week, as he wrapped up his remarks at Cheer Up Charlies on Friday night, June 28, an hour or so after the other Texan in this race, Beto O'Rourke, regaled his own supporters a few blocks north at Scholz Garten.

So now that, in the words of the Texas Tribune's Aman Batheja, "this whole two-Texans-running-for-president-at-the-same-time thing has stopped being cute," was our little town big enough for the both of these cowboys? Since Austin is neither of the 2020 Texans' actual home turf – reinforced by Castro as he negged our "pretty good" breakfast tacos – this new rivalry played out on neutral ground. The former San Antonio mayor and U.S. housing secretary pulled off the breakout performance at this week's first 2020 Dems debate, largely at O'Rourke's expense as Castro put the former El Paso congressman on the defensive on immigration, supposedly his signature issue.

At his Friday fundraising event to support the Texas Democratic Party – and afterward in an extended CNN hit with Don Lemon, live from Cheer Ups – Castro milked his rare second chance to make a first impression for all it was worth. "The question I hear is, 'Is our nominee able to stand up to Trump?'" he said. "What do y'all think? I made my case and held my own. Not every candidate can say that." Despite this dig, Castro assured observers that he still likes Beto, whom he stumped for enthusiastically in last year's Senate race.

By contrast, O'Rourke – whose campaign didn't announce the Scholz event until the day before; he later pleaded ignorance of the head-to-head scheduling drama – was making his 1,003rd (or so) impression on a crowd of faithful fans, including musical guest Marcia Ball, who told the crowd she'd be there "wherever Beto goes, wherever he lands." Luckily for O'Rourke, Joe Biden's stumbles made his halting performance in Miami look not-so-bad, and he felt no need with a friendly crowd to mention either Castro or the debate. Instead, just as Castro built on his new visibility, Beto took advantage of his familiarity, walking the crowd back through all 254 counties in Texas and splashing about in the refreshing memories of his Lone Star State successes, while throwing some shade on Castro's parade. The media advisory for the event cited a recent Texas poll in which Beto, leading all candidates, is "25 points ahead of fellow Texan Julián Castro"; in the latest UT/Texas Tribune state poll, released before the debate, Biden has 23%, O'Rourke has 15% for second place, and Castro 3% for seventh.

O'Rourke also regaled the crowd with stories from the 2020 trail, including an extended and graphic riff on his journey to the Homestead detention facility south of Miami, where he (like most other candidates, including Castro) saw Guatemalan minors "locked up like prisoners of war, not children." He recalled his similar high-profile visit to the Tornillo tent city during the Senate race last summer and previewed his Sunday visit to the Clint Border Patrol station, also near El Paso and the site of recent horrors, and to asylum seekers being illegally forced to remain on the Mexican side. (His campaign touted Beto's crossing to Ciudad Juárez, a fairly routine trip for an El Pasoan even today, as "the first foreign trip by a presidential candidate this cycle" – presumably not counting the incumbent, who at the time was at another high-profile border crossing with his BFF Kim Jong-un).

While Castro, making new friends among Texas Democratic donors (all funds raised went to the party, not his campaign), spent more time on his biography – as he does in his stump speech – a Venn diagram of the 2020 Texans' remarks would show substantial overlap not just of the issues raised, but of the time and energy devoted by each and of the promises to be kept by each if elected president. (Both Castro and O'Rourke went into depth on raising teacher pay, for example.) Both spent the weekend carefully avoiding each other as they crisscrossed the state making high-visibility appearances – Castro visited Clint on Saturday – and (we hope) spending a night in their own beds. Castro will spend July 4 in New Hampshire, O'Rourke in Iowa.

From the Texas Democrats' perspective, this is a good problem to have. Inevitably, if both Castro and O'Rourke make it into next year, the contest for our votes in the make-or-break Texas primary will clearly be more brutal than this. For now, they can play off each other to attract the attention they both need to stay close to the front-running pack.

A version of this article appeared in print on July 5, 2019 with the headline: A Hot Night in A-Town