In response, Abbott again threatens to save Austin from its elected leaders 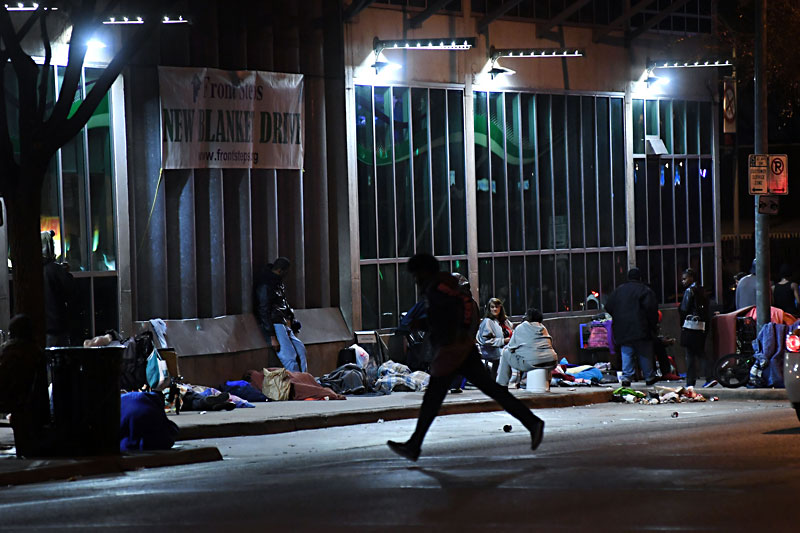 Gov. Greg Abbott has picked his next battle in his party's war on locally enacted progressive policies: the decision by City Council to ease three decades-old ordinances that seek to control the behavior of people experiencing homelessness. Early Friday morning, June 21, at the end of a marathon three-day session before its summer break, Council voted to amend two city ordinances that prevent individuals from sitting, lying, or camping in public, and another that criminalizes panhandling. The revised ordinances, which go into effect on July 1, now allow sitting/lying/camping in public so long as doing so is not hazardous or dangerous. The panhandling ordinance was changed to ban "aggressive confrontation," thus decriminalizing simple requests for money.

But Abbott has vowed to save Austin's residents from the local officials they elected, tweeting on Monday, "If Austin – or any other Texas city – permits camping on city streets it will be yet another local ordinance the State of Texas will override." When Austin passed an ordinance requiring mandatory paid sick leave in February 2018, then-state Rep. Paul Workman issued a similar threat; though the Austin ordinance is currently on hold as it's challenged in court, the Texas GOP failed to deliver on that promise in the recently concluded legislative session.

Council Member Greg Casar, who championed the issue on the dais, responded to Abbott with tweets of his own, writing, "You had 6 months [during the Lege] to address the very real suffering of millions of Texans just trying to make ends meet. You did not." Casar continued in a separate tweet: "Instead you focused on installing revenue caps, making it much harder on cities to allocate the funding necessary to do right by our constituents on this – and many other – issues."

“If Austin – or any other Texas city – permits camping on city streets it will be yet another local ordinance the State of Texas will override.” – Gov. Greg Abbott

The most revealing part of Abbott's tweet came at the end: "There are far better solutions for the homeless & citizens." Aren't people without homes also citizens? That's the principle behind the 18-month push to decriminalize homelessness in Austin, as one of the Homes Not Handcuffs campaign's central organizers, Chris Harris of Just Liberty, told the Chronicle on Tuesday. "The principles of this campaign were grounded in some radical ideas about shared humanity among all people and access to public space, regardless of how much money they have," Harris told us. Ultimately, he said, loosening the restrictions on behaviors that are "unavoidable" while living without housing removes a "stain on the city."

While the revised ordinances do away with the specific offenses of solicitation, sitting/lying, and camping, laws against assault, harassment, and other hostile behaviors are still on the books, and camping in public parks is still banned. Police officers are required to issue a warning to anyone before writing a citation for any of these offenses.

Before the vote, speakers filled the chambers to capacity; much of the opposition came from Downtown stakeholders, such as Kimberly Levinson, vice president of the Downtown Austin Neighborhood Association, who signaled support for housing those without homes but voiced concerns about the "very ill effects" of dialing back the ordinances without new rules that "protect people and make people feel safe walking around Downtown Austin."

Parents and students from the UT group SafeHorns echoed these concerns, citing the "danger" they feel walking along the Drag or through West Campus where people congregate on the streets. Many characterized those people as alcoholics or drug addicts who refuse help – a myth, advocates say, that perpetuates the cycle of suffering and hopelessness that can make exiting homelessness so difficult.

But those speaking in support of the changes, including social justice activists, members of the clergy, and those with lived experience, vastly outnumbered those opposed. Although many felt Council did not go far enough – especially with the compromise on "aggressive confrontation" language, which they fear will give police too much discretion – they acknowledged that the votes were a meaningful step forward. "For too long, we've relied on police and jails to handle our social and economic problems in our communities," Harris told Council. "It's going to take this entire city – every man, woman, and child – in order to fix this problem." Steven Potter, who is currently without housing and advises the city on the experience of homelessness, spoke again before Council late Thursday night, saying the "old ways" represented by the ordinances were not only ineffective, but potentially lethal for individuals with nowhere else to go. "Let go of the old ways," he urged Council, "and work with the homeless on real solutions."

On the dais, Council largely agreed that criminalizing these behaviors acts as a barrier to lifting people out of homelessness, but some (Council Members Kathie Tovo, Ann Kitchen, and Alison Alter) pushed to consider the camping ban in August instead. (Between now and then, City Manager Spencer Cronk has been tasked to find locations in each Council district where those without access to shelter could safely camp.) Their colleagues disagreed, with CM Greg Casar and Mayor Steve Adler insisting the amendments be approved that night. "We can't continue perpetuating injustice simply because we haven't fixed everything yet," Casar said, adding that delaying the vote would be "a stain on my conscience." The camping amendment was pulled for a separate vote, passing 9-2 (Tovo and Alter against); the other changes passed unanimously.

Now, the advocates who pushed for the ordinance change will watch closely as APD adapts to the new policies. At a press conference Friday, APD Chief Brian Manley said the amended ordinances would "fundamentally change" how his officers enforced the rules. Now, officers cannot force people to move from a public space that is not a greenbelt or public park unless they are posing an immediate threat; nor can officers cite an individual based on "a[nother] person's perception of their own safety." He explained further: "No longer will someone's perceived sense of their safety being impacted be enough; we will have to go and establish a condition that we can demonstrate was hazardous or dangerous."

The advocates who fought to change the ordinances are wary of this language, because it values the protection of "quality of life" – i.e., the discomfort one might feel when encountering a person living on the street – over practices aimed at improving the lives of the marginalized. One measure of success for Harris and his allies will be if the number of citations issued for the revised ordinances plummets, but another test will be how police officers adjust to the new rules. Manley indicated his staff was already developing training materials to ensure patrol officers understand what is expected. Still, Harris remains cautious: "I have no doubt there are many officers who will experience this as a difficult shift," he told us. "APD will require strong internal policies to ensure that enforcement of these more narrow ordinances is followed consistently."

A version of this article appeared in print on June 28, 2019 with the headline: No Longer a Crime