Various Possibilities for the Future of I-35

So many options, but only one (or none) can be our new highway This illustration from Reconnect Austin shows the core concept of the initiative – enclose the I-35 main lanes, build a boulevard at street level over them, and reclaim the right of way that’s now used by frontage roads and ramps as developable real estate, which produces revenues that can be used to defray the cost of the infrastructure.

Even without the real-estate component, the cut-and-cap concept of Reconnect Austin and others envisions what are now skimpy bridges and unpleasant underpasses being turned into parks and public space. 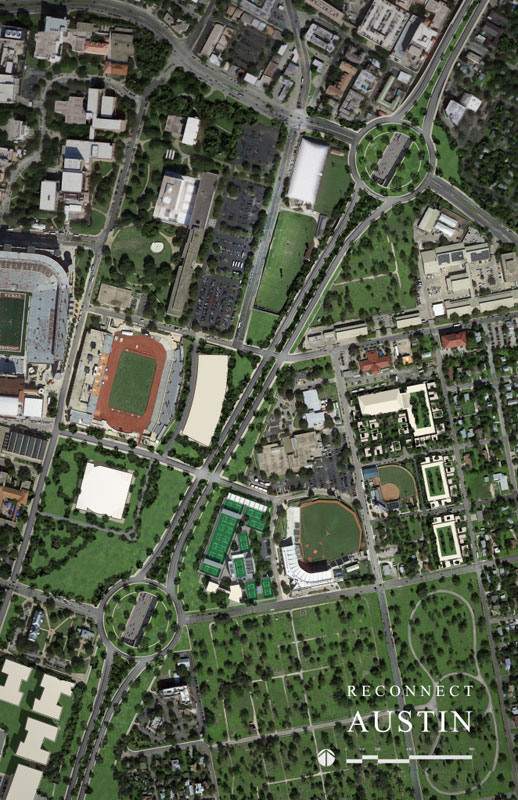 The same cut-and-cap approach, Reconnect Austin has suggested, could replace I-35’s ugly squeeze by the UT campus with a boulevard tying together the UT Athletics venues. 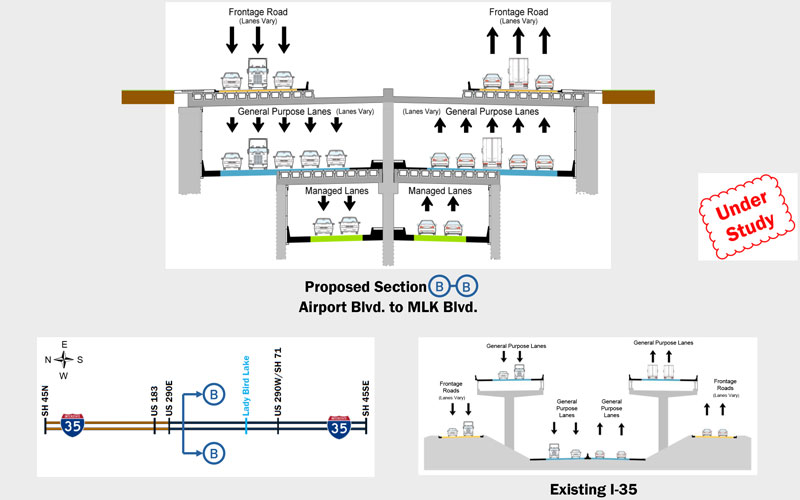 One of the concepts under study by TxDOT now would place the new double managed lane underneath the current roadbed – that is, tunneling – and cantilevering the frontage lanes (at current street level) over the mainlanes (where they are now), while removing the upper deck. This is what local stakeholders used to convince TxDOT to agree to depress the I-35 mainlanes Downtown, to allow for whatever kind of public use above. Way before Reconnect Austin, back when TxDOT was last primed to “improve” I-35, the city commissioned a study from a group of local architects and real estate professionals (led by Gary Bellamy of Land Design Studio) that explored the then-fantastical notion of building over the highway. The Air Rights study concepts, unlike many cut-and-cap proposals since, placed new buildings down the middle of the right of way instead of on its edges. It is believed by many, though not entirely certain, that this sort of approach would not be allowed under current (post-9/11) federal highway guidelines. The 2014 version of Capital Metro’s Project Connect high-capacity transit initiative included this vision of express bus service in a dedicated lane – either transit-only or “managed” through tolls or other means to give transit preference.