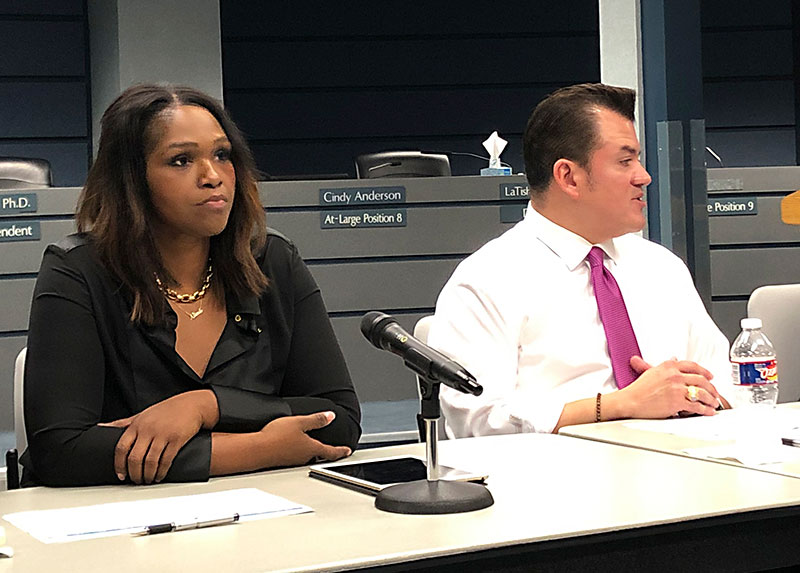 After months of trepidation about the financial health of the district, the AISD board of trustees approved unanimously on Monday night (June 17) a $1.6 billion budget for the 2019-20 school and fiscal year. The budget includes an estimated $88 million in new revenue from the state, which will help fund some of the largest single-year pay raises in the district's history.

On Thursday, June 13, AISD officials announced that teachers, librarians, and counselors with more than five years of experience will get a 7% raise, expected to cost the district $13.8 million; all other employees will get a 6% raise, costing the district about $22.7 million. In addition, the stipends for bilingual educators and special education teachers will be increased by $1,000 and $500, respectively, a move that adds about $8.3 million to the district's personnel costs. All pay increases go into effect July 1.

Though the new state school finance package contained in House Bill 3 includes money to increase employee pay at every Texas district, AISD's raises are double what the legislation requires. They're also double what's being offered by neighboring districts that are growing in enrollment (and state per-student funding), whereas AISD enrollment has been declining for six years and is expected to continue shrinking.

The district hopes the raises will help AISD recruit and retrain the teachers it needs despite Austin's rising cost of living. Teacher Heather Merritt praised AISD for working with Education Austin, the district's employees' union, to make "an investment in our kids and the institutional knowledge of our educators," and added, "I've already heard from people who are wanting to come back to the district because of this raise."

The trustees have yet to approve a new tax rate for the coming school year, but will likely do so by September. HB 3's required 7-cent compression of school property tax rates would set AISD's at $1.122 per $100 valuation, resulting in a $249 drop in the tax bill of a median-priced home ($341,209) in Austin; however, the district anticipates homeowners will pay an average of $104 more in AISD taxes this year, due to property values rising across the board.

Around this time last year, the board and district leaders began laying the groundwork for what they described as unavoidable cuts in the 2019-20 budget, needed to close a $60 million deficit. The budget approved this week includes about $30.5 million in cuts, but also $13.9 million in new spending supported by HB 3 funding, leaving approximately $47.5 million to be funded out of district reserves for the upcoming year – about the same amount the district is investing in its new compensation package.

But AISD leaders are still warning of potential fiscal trouble on the horizon. Although the Legislature invested $6.5 billion in new money into the state's public education system via HB 3, lawmakers could not agree on any new revenue streams to sustain that funding, instead opting to balance the state budget with one-time expenditures of surplus and reserve funds. Should the Lege not identify new revenue sources in the 2021 session, AISD and other districts are at risk of having to surrender the funding gains achieved this year. "We absolutely have to be diligent about implementing our austerity plan," Chief of Busi­ness & Operations Nicole Conley told the board, "because we are on a trajectory of continued loss." The district expects to lose about 1,600 students in the coming year, at a cost of $8 million in state funding.

At Monday's meeting, trustees also approved the hiring of Dr. Stephanie Hawley as the district's first Equity Officer (a $160,000 line item in the budget). Hawley will bring more than two decades of experience in education, with the past decade spent as associate vice president of the Office of Equity and Inclusion at Austin Community Col­lege. Hawley will join AISD at a politically tumultuous time in the district's history, as it enters into a fraught "school changes" process that will result in campus closures and consolidations. Although Hawley does not officially start at the district until Aug. 1, she will be expected – if not by AISD leadership directly, then certainly by the community at large – to play a key role in achieving equitable outcomes during the school changes process.

Hawley will report directly to Super­in­tendent Paul Cruz and is charged with the lofty task of assessing the entire district's operations for inequities affecting students and staff. Although the creation of the Equity Office was largely celebrated by the board, several trustees expressed concern that the role would "not have teeth" and that this would affect Hawley's ability to enact meaningful change. Trustee Jayme Mathias called the hiring "historic," but added, "We all have to acknowledge that we're still on the hook for this. Let's see how it is; together with the help of this person, we might be able to address the persistent inequities in racism and segregation that we still struggle to shake."

A new dress code was also approved for next school year, which is intended to give students more freedom in what they wear, so long as they adhere to "basic principles," such as ensuring that clothing covers the "abdomen, genitals, buttocks, breasts, and nipples." Students can wear hats, hoodies, and spaghetti straps, but are barred from wearing clothing with violent imagery or references to drugs or alcohol.

The school board will next meet in Aug­ust, when it will consider adopting a new sex education curriculum, after a delay stemming from legal questions surrounding Senate Bill 22 – which prevents local governments from doing business with Planned Parent­hood – being signed into law by Gov. Greg Abbott. At the same meeting, trustees will also get their first look at "scenarios" for the school changes process.