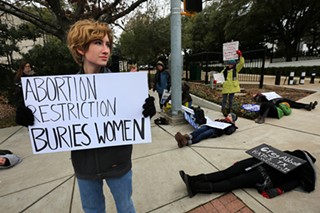 Amid the growing number of abortion bans throughout the nation, the U.S. Supreme Court recently ruled on an Indiana law that forces women to bury or cremate their fetuses after abortion or miscarriage – imposing an often-religious ritual on women stripped of their choice. In a three-page unsigned order, the court, with dissents from Justices Ruth Bader Ginsburg and Sonia Sotomayor, upheld the provision – while a 20-page rambling manifesto by normally taciturn Justice Clarence Thomas denounced abortion as a "tool of modern-day eugenics." (If you're rolling your eyes, we're right there with you.)

Texas officials have twice attempted to institute fetal burial here – once by statute (2017's Senate Bill 8) and once as a Texas Health and Human Services Commission administrative rule. The latter was voided in 2017 by U.S. District Judge Sam Sparks, who called it a "pretext" for restricting abortion. In 2018, U.S. District Judge David Ezra in San Antonio granted an injunction against SB 8, finding that plaintiffs – including Austin Women's Health Center and Whole Woman's Health – would likely be able to show the law "imposes an undue burden" on women's constitutionally protected right to abortion at trial. Oral arguments in that case were slated to start this week, but have now been postponed for at least 60 days.

In the meantime, says Center for Reproductive Rights attorney Molly Duane, "the Indiana decision at the Supreme Court should not have any practical impact on our case." Those opposing the Indiana law argued it had no rational basis, a different legal standard than the "undue burden" cited in the Texas case. "We are moving ahead with confidence," Duane told the Chronicle. "Our evidence clearly shows the Texas law would place an undue burden on women and restrict their liberty and access to abortion."

But that's never stopped Texas Attorney General Ken Paxton! In a statement, he cites the brief he and 18 other states filed in support of the Indiana law, which Thomas in turn cited in his screed. "This latest ruling honors the dignity of the unborn and prevents fetal remains from being treated as medical waste," said Paxton. "My office is awaiting oral argument in our state's own fetal remains case. We look forward to demonstrating that Texas' law is constitutional and does not impact the abortion procedure or the availability of abortion in Texas."