Only 5% of Celebration Church's rent will go toward Pride activities 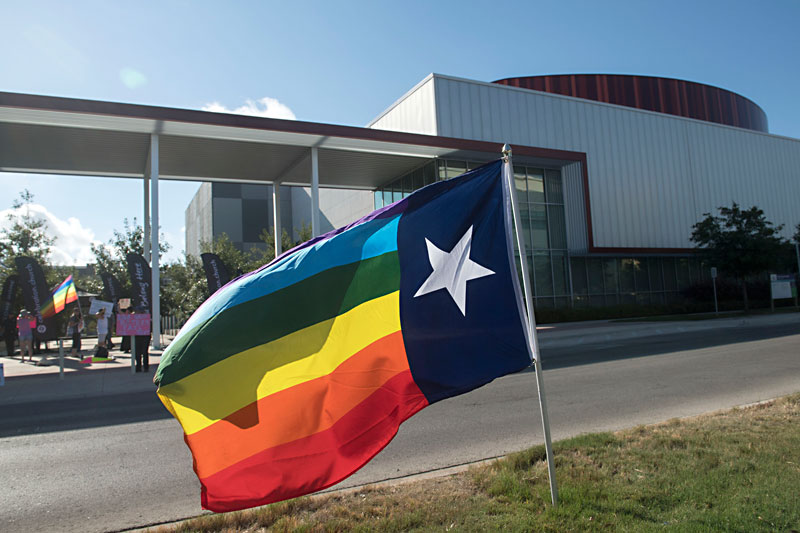 Austin Independent School District is making good on a promise to use revenues generated from an anti-LGBTQ church to fund programs aimed at helping the district's LGBTQ students. In a release issued June 4, AISD announced that $10,000 of the money collected from renting the district's Performing Arts Center to Georgetown-based Celebration Church would be used to pay for "district and campus Pride activities," including AISD's participation in the Austin Pride Parade in August. While AISD has participated in the parade before, district officials say the PAC income will allow more students to join in. About $4,000 will be used to transport kids from different AISD campuses to the Downtown parade; the remaining $6,000 will go to refreshments, promotional materials, and supplies to support the district's Pride activities.

After the Chronicle first reported that AISD would begin renting its PAC to a church that requires members to adopt a "biblical" understanding of marriage and gender identity – meaning gay, lesbian, and transgender individuals are not allowed to join – local LGBTQ activists began a campaign to pressure district officials into severing ties with the organization. Gathering every Sunday to demonstrate outside the PAC and speaking regularly at board of trustees meetings, the activists were assured by AISD Superintendent Paul Cruz that "funds collected from the [PAC] rental will be dedicated to our districtwide efforts to ensure we support an inclusive, welcoming environment for all students and staff, including our LGBTQ students and staff."

The $10,000 investment in Pride represents only about 5% of the revenue AISD has collected from Celebration Church since August 2018; in total, the church has paid AISD over $182,000 in rental fees. District policy allocates half that revenue to PAC staffing costs; the rest is split between AISD's general fund and its arts programs.

That would still suggest that there's substantially more Celebration income than the district has committed to Pride, which came as a surprise to some of the LGBTQ advocates who've been following the issue closely. Naomi Wilson, a trans woman who graduated from Crockett High School in 2014, told the Chronicle on Tuesday that "every single dollar that Celebration has given the district should be given back to the community that is being targeted."

AISD officials said on Wednesday that they are working on other ways to invest the remaining funds generated by renting the PAC to Celebration, but they could not say the amount. The funds would be used to "assure that we continue creating a safe, supportive, and inclusive environment for students, staff, and families," but specifics were not given. A plan has been submitted to district administration and approval is expected soon.

Celebration Church did not respond to a request for comment, but its website describes marriage as a "lifelong covenant between a man and a woman." The original language was changed following the Chronicle story drawing attention to the church's beliefs. It formerly read: "We believe that any form of sexual immorality, such as adultery, fornication, homosexuality, bisexual conduct, bestiality, incest, pornography or any attempt to change one's sex, or disagreement with one's biological sex, is sinful and offensive to God."

But district leaders maintain that they cannot legally deny Celebration the use of the publicly owned PAC. When the board contemplated in September a policy change to make it easier for administrators to bar organizations opposed to AISD's values from using its facilities, Texas Attorney General Ken Paxton threatened legal action; the trustees backed down and instead urged Cruz to use the rental revenue on LGBTQ initiatives.

Celebration is just one of more than 40 churches that rent AISD facilities. The Austin Stone Community Church, which rents Austin High for three services on Sundays, also adheres to a "biblical" view of marriage and gender; its website defines marriage as "a covenant between one man and one woman, in a single exclusive union," and says, "Regarding gender, God fearfully and wonderfully created each person as male or female." Kathryn Gonzales, operations and program director with Out Youth, framed the rentals in no uncertain terms: "Allowing hate to flourish in places of public accommodation, especially places where young people go to learn and should feel safe, is unconscionable."

Gonzales says if AISD's hands are tied, it should invest all revenue from the churches in ways that could have a deeper impact on LGBTQ students. Participation in Pride is a good, visible way for the district to show support, but more thorough training for the adults who work with those students – and more books, movies, and other learning materials made by and for LGBTQ people – could prove more meaningful. As of press time, Celebration Church is set to rent the PAC this Sunday, and possibly throughout July. AISD will participate in the Austin Pride Parade on Aug. 10 and host its own Pride event on Oct. 5.

A version of this article appeared in print on June 14, 2019 with the headline: Is Pride Enough?