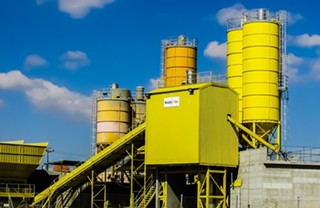 Residents living near a concrete mixing plant in Southwest Austin are calling on local authorities to address their concerns about safety, noise, and pollution. The neighbors organized in the Signal Hill Area Alliance live near Austin-based Easy Mix Concrete Services' plant on Signal Hill Road, one of two the company operates in Central Texas. The plant and homes are located within Austin's extraterritorial jurisdiction (ETJ) in Hays County, and the residents say they've struggled to get local officials to engage in their two-year effort to urge Easy Mix to modify its operations.

Easy Mix's environmental behavior has not gone entirely unnoticed: City of Austin officials have cited the company three times for water quality violations. Easy Mix General Manager Bill Heath appeared in Austin Municipal Court on June 5 on one of the citations. Another, issued in 2018, prompted Easy Mix to install silt fencing and rock gabions intended to protect nearby waterways, but the neighbors say runoff from the mixing plant is still pouring into those streams after heavy rains.

The neighbors also say Easy Mix has been unwilling to address noise that can sometimes rattle the walls of their homes. One nearby resident, Tim Peery, lives less than 100 feet from the plant and said its operations – which begin before dawn on some days and go until well after dark – make it difficult for his wife to rest after returning home from cancer treatment. "Easy Mix showed callous disregard when I brought them my concerns," Peery told the Chronicle. "We've asked them to adjust their operating hours, but they haven't done it."

Heath says he supports changing the plant's schedule to not operate before 9am, or after 6pm, but neighbors haven't been interested in working with him. (Several Signal Hill neighbors who've met multiple times with Heath and Easy Mix dispute this characterization.) "It's like they want us to get out of there or they won't be happy," Heath said. Easy Mix is looking at locations for a new plant, which could reduce the company's current workload at the Signal Hill plant by up to 75%.

Meanwhile, state Rep. Erin Zwiener, D-Driftwood, is urging House Speaker Dennis Bonnen to assign an interim charge for a House committee to study how Texas can more tightly regulate construction aggregate businesses. Zwiener filed four bills during the 86th Texas Legislature that would require more scrutiny of how these businesses affect water and air quality and infrastructure, but none made it out of committee. Zwiener is joined in this effort by her legislative neighbor Rep. Terry Wilson, R-Marble Falls; she said she hopes an interim study could help lawmakers roll into the next session with recommendations for a bill.