David Whitley Back in Abbott’s Office With Promotion, Raise

Speaking of which: Disgraced former Secretary of State David Whitley, fall guy for the ill-fated Great Texas Voter Purge of 2019, has been rehired as a deputy director in Gov. Greg Abbott's office with a $205,000 annual salary. "David Whitley got caught suppressing the vote and cost the state nearly $500,000 in court settlements," said Sam Robles, advocacy director of Progress Texas. "While Democrats chose to effectively fire Whitley for his actions, Repub­licans chose to give him a promotion and a raise. Whitley's return to the Governor's office clearly demonstrates Abbott's priorities." During his short tenure as the state's top election officer, Whitley claimed (falsely) that thousands of noncitizens had voted, got named in three different civil rights lawsuits, and had his confirmation to SoS blocked by Senate Democrats.

Emails made public this week by the League of United Latin American Citizens, one of the plaintiffs in those lawsuits, show Whitley was carrying out the wishes of his former boss, as many observers suspected. Abbott requested the voter purge – an effort in the works since March 2018 – and applied pressure to Texas Department of Public Safety officials to provide data that Whitley could use for "voter list maintenance." (That euphemism allowed Texas to pay for this endeavor with federal funds awarded under the Help America Vote Act. We are not joking.)

As Abbott rewarded Whitley for instigating a fiasco, he retaliated against the senators who stood united in Whitley's way despite the governor's one-on-one entreaties. Just minutes after Whitley resigned and before the Senate gaveled out sine die, Abbott vetoed four noncontroversial bills (among them a provision to prevent the installation of unsafe tires) authored by Senate Dems, including El Paso's José Rodríguez and Laredo's Judith Zaffirini. 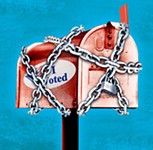 How Are We Going to Vote?
While the U.S. moves toward voting by mail, Texas digs in its heels

Election Ticker: From the Council Dais to Round Rock
Endorsements are rolling in for March 2020 Primary