Rare Wins for Workers' Rights at the Texas Lege 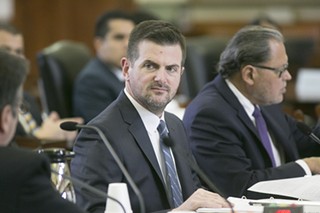 From the outset of the 86th Texas Legis­lature, Republican lawmakers, backed by Abbott and Patrick, trained their blazing guns on local control to punish grassroots progress at the municipal level, continuing a trend set in 2017. Brandon Creighton's original sweeping omnibus bill, SB 15, would have undone such local worker protections as Austin's "ban the box" fair-chance hiring ordinance, which prohibits employers from inquiring about applicants' criminal histories up front, or mandatory scheduling requirements, which guarantee 10-minute breaks for construction workers for every four hours on the job. The bill also voided local requirements for certain employee benefits, including life and dental insurance and, most notably, paid sick leave, adopted in Austin, Dallas, and San Antonio. Austin City Council Member Greg Casar, the local champion of most of these measures, made the case against SB 15 at the Capitol along with a number of Austin businesses. Creighton later split the package into four separate bills that withered after being amended to protect local nondiscrimination ordinances, despite the backing of Abbott, Patrick, business leaders, and the right-wing think-tankers at the powerful Texas Public Policy Foundation. This provided a rare win under the dome for local control and the people-powered social and economic justice movements that propelled those local ordinances to victory.