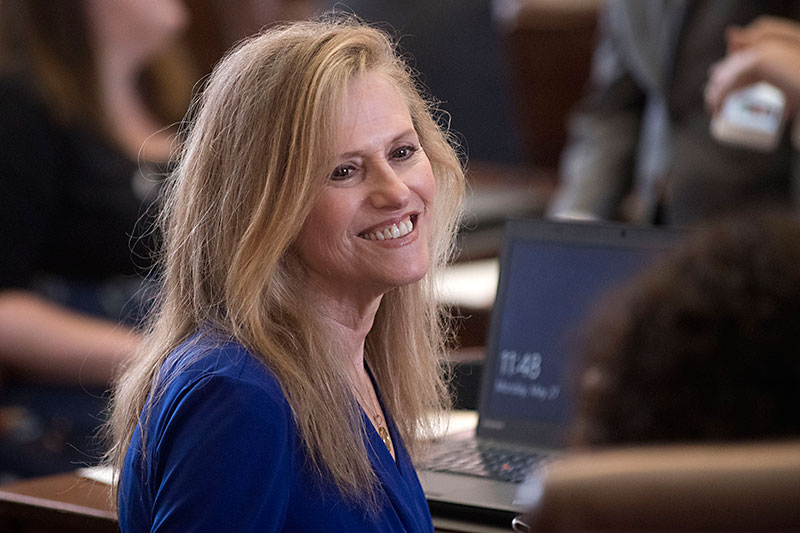 She's represented Austin in the Texas House for seven terms as a high-profile and tireless advocate on both education and health care, but you may not have recognized Donna Howard on Monday – sine die for the 86th Texas Legislature – without her distinctive curly coif. Last year, as she clapped back at Ted Cruz's attempts to mock Beto O'Rourke, she called herself a "big-hair Texas woman down to my roots" who didn't need "someone from Canada mansplaining what it means to be a Texan." (Photo by John Anderson)

Bye Bye Bye! Yes, that was the formal end of the 86th Legislative session on Monday (aka "sine die" – see "Sine Dead!," May 31). They did what they could for public schools and homeowners, rather less than they could for city dwellers and the uninsured, and went out of their way to insult women and LGBTQ Texans. Adiós, mofos!

Bastrop Hate Crime? A month after an arson attempt and acts of vandalism against a Northside mosque, another act of Islamophobia hit Muslim Space, a local Islamic institution. A sign directing attendees to a Ramadan iftar at the Colony Amenity Center in Bastrop was defaced with obscenities. The Austin chapter of the Council on American-Islamic Relations is urging law enforcement to investigate the incident as a hate crime.

Roy-al Flush: Hill Country Republicans reaped the electoral whirlwind this week, as Congressional District 21 Rep. Chip Roy garnered national scorn for single-handedly delaying a federal disaster aid bill to help victims of Midwestern floods, Western fires, and 2018 hurricanes, by blocking "unanimous consent" while Congress was out of session. He was followed by Kentucky backbencher Thomas Massie, because ... they could.

South H-E-B Closing: The Texas grocery chain announced it would tear down its store at S. Congress and Oltorf to make way for a gargantuan 100,000-plus-square-foot store in the same location. The new H-E-B will feature a food hall, beer garden, and two levels of underground parking. Construction is set to begin in 2020, and opening is projected for 2022.

Speaking of Stores: A micro-Target, if you will, plans to nestle up next to a small Whole Foods in the massive East Austin development now dubbed Saltillo (fka Plaza Saltillo). The tiny Target, the retailer's 2019 trend, is slated to open at 901 E. Fifth St. in 2020 and will take up approximately 25,000 square feet. Regular Target stores average roughly 80,000 square feet.

Trans Rights, Human Rights: On Tuesday, May 28, the Trump Administration was sued by 16 health care groups and doctors in an effort to block attempts to roll back health care regulations under the Affordable Care Act that protect trans health care. If allowed, the rollbacks would make it all right for doctors and other medical providers to deny care, including abortion and sex reassignment surgery, to trans patients.