Texas Secretary of State Gets Schooled on Voting Rights 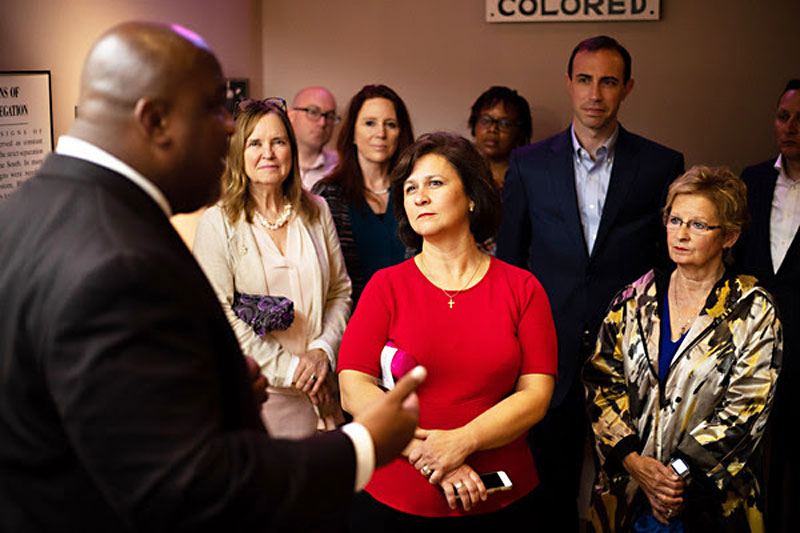 Update: Catch up with the current status of Senate Bill 9 at this link as it makes its way to the House floor.

Texas Secretary of State David Whitley – the frontman of Gov. Greg Abbott and Attorney General Ken Paxton's effort to suppress the vote with cries of fraud – recently participated, with much apparent satisfaction, in a first-ever voting rights history tour in Alabama to "reflect upon the struggles, sacrifices, and successes of voting rights leaders in the early 1960s and beyond." Whitley, who grabbed national headlines by bungling an attempt to question the citizenship of 95,000 voters and ultimately settling three separate civil rights lawsuits against the state, joined 19 other states' top election officials, who likely scooted away from the Texas SoS during photo-op hour.

Might we offer another tour suggestion? "It's nice to see Whitley has finally realized it might actually be important to the job of Texas' chief election officer to know a bit about voter suppression, but he hardly needed to leave the state for that," said Anthony Gutierrez of voting rights group Common Cause. "He could have visited some of the thousands of people he himself was trying to knock off the voter rolls, or he could even just come hang out in the House Elections Committee hearing later this week on Senate Bill 9..."

Hefty Ad Buy Targets Voter Suppression Bill: That hearing of the execrable SB 9, authored by state Sen. Bryan Hughes, R-Mineola, and approved by the Senate last month, took place amid protests Wednesday (May 15), as the Chronicle went to press. You may have caught a TV spot that feels like a campaign ad for a candidate, but instead champions your right to cast a ballot in the first place. That's part of a six-figure effort to defeat this legislation, which would slap those who make mistakes on their voter registration forms with a state jail felony, harshly penalizing what are often innocent errors. SB 9 increases criminal penalties for wrongly casting a vote, including a provisional ballot – the option specifically provided by law for those who aren't sure if they can vote in a certain place or contest.

Secure Democracy, a group that aims to "educate policymakers and the public about secure and fair elections," recently launched its TV and digital campaign to highlight how SB 9 could punish and intimidate voters, particularly the elderly and disabled veterans, by allowing partisan poll workers to look over their shoulders while they cast a ballot. The group conducted a statewide poll that found 86% of Texans (including 88% of Republic­ans) opposed making it more difficult for the elderly or disabled to get ballots in the mail. "The security and integrity of our elections matter to all Texas voters, but SB 9 would unfairly penalize disabled voters, including the brave men and women who have been injured serving our country, making it harder for disabled voters to get an absentee ballot," said Colin Weaver of Secure Democracy...

A version of this article appeared in print on May 17, 2019 with the headline: Learning His Lesson