Legislative Bill Would Hide How the Sausage Is Made 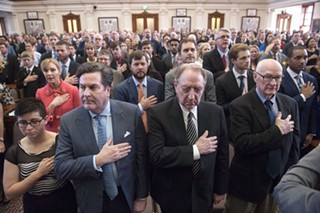 HB 4181, reported out of the House on May 3 and now pending in the Senate Business & Commerce Committee, at first looks as unremarkable as its caption: "Relating to the organization and efficient operation of the legislative branch of state government." Much of the bill is occupied with what appear to be housekeeping matters: who presides over the House or Senate in unusual circumstances, the appointment of temporary officers, specific committee responsibilities, etc. But buried among the bill's provisions are sufficiently alarming changes to the handling of legislative records to evoke stiff opposition from the Texas Library Association, under the header, "An Assault on the Public's Right to Know."

Wondering whether the Legislature is trying to "hide something," the TLA reported: "The bill would exempt Legislative Branch records from the statutory definition of a 'state record,' would transfer much of the authority of managing the records from the Texas State Library & Archives Commission to the Legislative Reference Library, and would add several new areas of exemption for legislative records from public access under the Open Records Act." Those exemptions include communications between legislative staff (not just lawmakers themselves) and the Legislative Council about the drafting of bills – i.e., where and how the sausage is made. (The State Library's sunset reauthorization bill, HB 1962, has similar language about legislative records and is also pending in Business & Commerce.)

TLA Advocacy & Communication Director Wendy Woodland said that not only does the bill seek to reclassify legislative records as no longer "state records," it will also maintain legislative ownership of those records, with uncertain availability under the Open Records Act. It's not clear who is pushing the bill – sponsored by House Administration Committee Chair Charlie Geren, R-Lake Worth, the committee's substitute version came to the House floor without public testimony and passed on a voice vote with no substantive discussion of the public records provisions.

The TLA writes that it "believes the public has the right to know what its government and elected officials are doing with the least interference possible" and urges the Legislature to reject these dramatic changes in legislative records law. Joining the TLA in opposition are the Society of American Archivists, the Council of State Archivists, the National Association of Government Archives and Records Administrators, and the Regional Archival Associations Consortium.