AISD Board gets closer to "school change"

The Austin ISD Board of Trustees spent hours Monday night, May 6, debating the overarching guiding principles and regional maps the district will use as it crafts scenarios for school closures, repurposed facilities, and redrawn attendance zones. At times, the conversations echoed the recent wrangling at City Hall over the city's land use code. "We have a board that tends to get so paralyzed by overanalyzing the details of everything that sometimes it can stand in the way of being able to stand aside and let staff do their work," Trustee Yasmin Wagner said at one point. Looking ahead to the long, controversial process of rightsizing the district, she added, "Let's not get bogged down at this point in the game. Let's keep focused on the bigger picture." 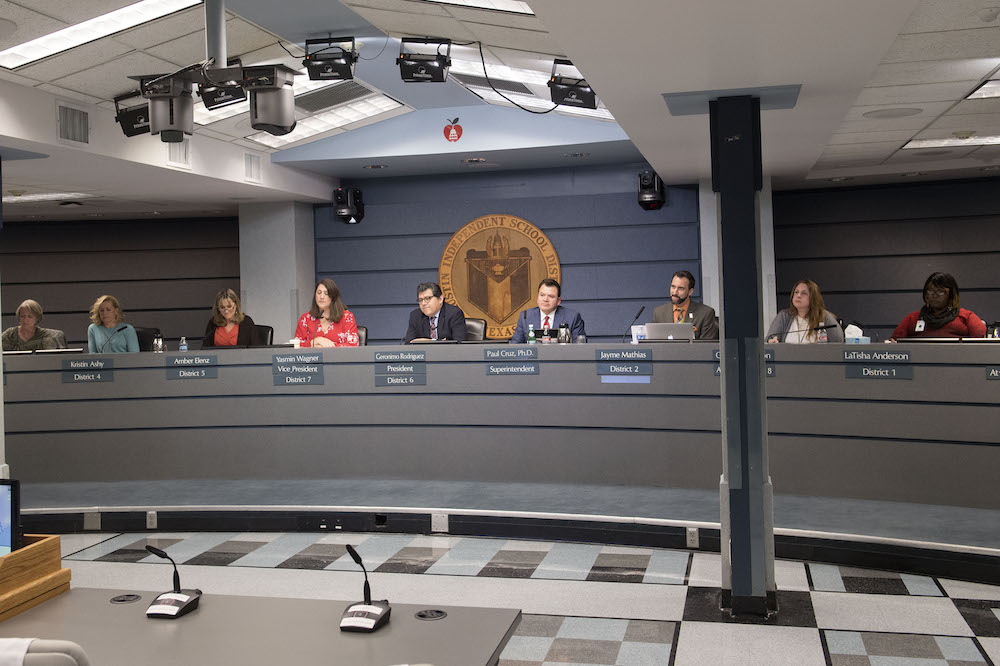 AISD Board (Photo by John Anderson)

The maps in question are of "regional planning areas" that eschew the seven trustee districts, traditional school attendance zones, and familiar boundaries such as Lamar and I-35, according to AISD Operations Officer Matias Segura. This was to promote "creative solutions" to the problems the district faces, such as underenrollment in the east and overcrowding in the west, or "academic deserts" without access to popular programs such as dual-language classes or pre-Advanced Placement courses. (The map that has attracted the most positive attention from trustees so far divides the district into five broad east-west bands.)

Eventually, district staff will use one of these maps to develop 10-12 scenarios for each region, which will attempt to solve the academic, operational, and financial woes the district has confronted over a decade of enrollment decline. Those scenarios will each include multiple elements, such as closing older schools that are expensive to maintain, redrawing boundaries to balance diversity among schools, or moving programming from one campus to another. Staff will then whittle down the scenarios to a short list for the board to consider in October.

Trustees stressed that the maps presented Monday would not be set in stone, even after district staff choose one as a starting point for the "school changes" process. As scenarios are generated for each region, it's possible that the maps will shift. Several trustees referred to the maps as "planning tools," meant to make an unwieldy process of districtwide change more manageable. Board President Geronimo Rodriguez said that the process would not "be easy work, but the right work," and that the maps and guiding principles are "a prudent, smart way of making equity real to every single parent, child, and community member in the district." The board is set to approve guiding principles at its May 20 meeting.