A Decade of Democratic Gains in Central Texas

Turning red to purple and purple to blue 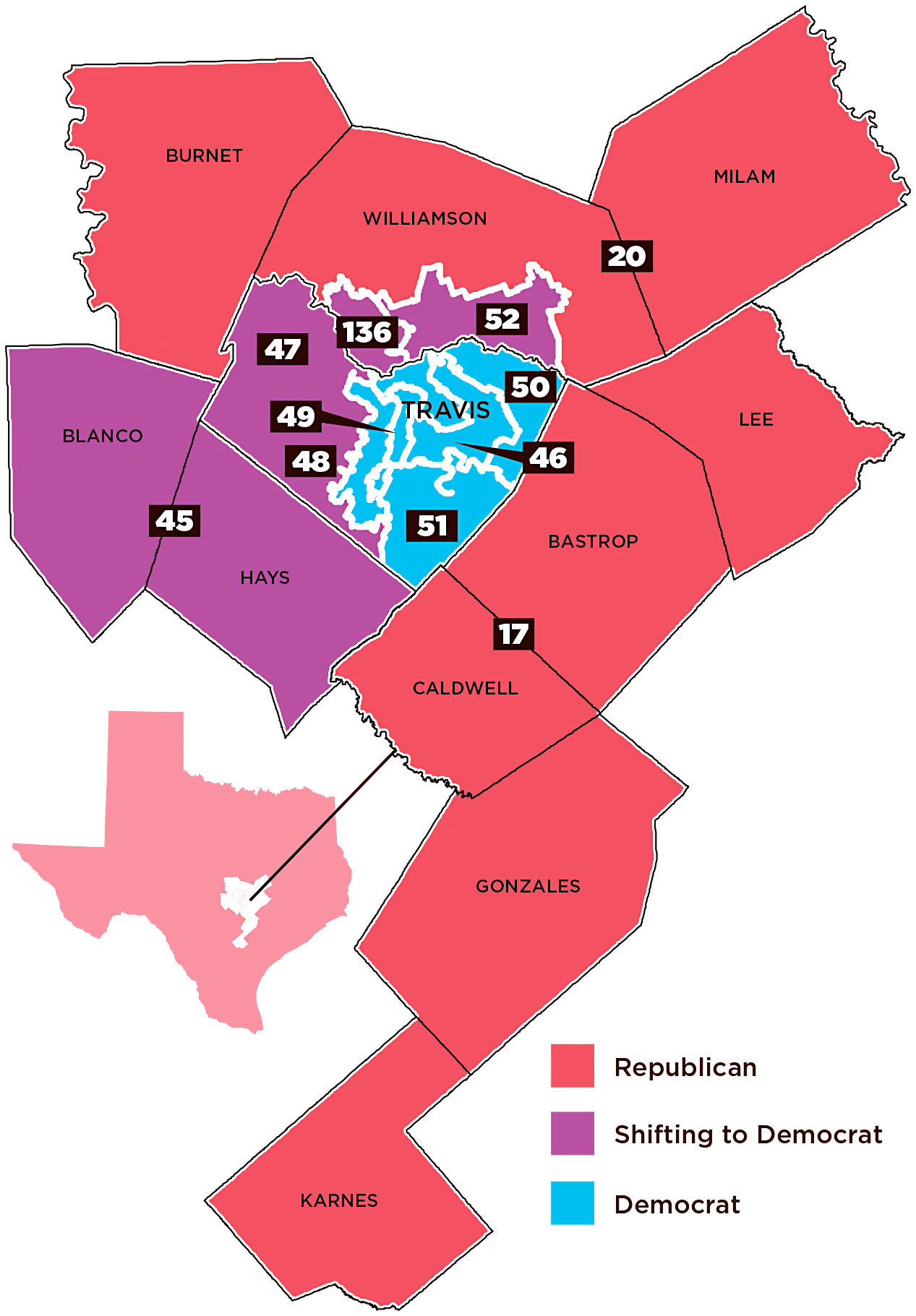 Eleven Texas House districts comprise the five-county Austin metro area: Travis has six, Williamson is split among three, Hays makes up most of one, and Bastrop and Caldwell together anchor another. (State House districts, unlike state Senate or U.S. congressional districts, are drawn to respect county lines.) When this map debuted in 2012, Republicans captured six of those 11 seats; today, Democrats hold nine, which between them include the entire city of Austin.

The chart below shows the shift in the Dems' favor, in percentage terms, in 2018 from the previous race for each seat. So, for example, Sheryl Cole's margin of victory over Republican Gabriel Nila in 2018 was 16.2% higher than her (scandal-ridden) predecessor Dawnna Dukes' win over her GOP opponent – also Nila – in 2016. (We're leaving out the Libertarians for now.)

The safest blue seats in Central Texas have long been those anchored in Central and East Austin: Cole's HD 46 (historically Black), Eddie Rodriguez's HD 51 (historically Latinx), and Gina Hinojosa's HD 49 (historically Weird). North and West Austin – today's HD 48 and HD 50 – used to be more swing-y, as was famously shown when Donna Howard escaped the 2010 red tide by four (4) votes. The years since have seen both districts harden in the Dems' hands; neither Howard nor Celia Israel faced a Republican opponent in 2018.

The shift to the left in the suburbs – those outside Travis County, plus HD 47 – has come from different baselines. To the south, Hays, Bastrop, and Caldwell remained yellow-dog country for a very long time (HD 17 until 2008, HD 45 through 2010), but flipped red hard over the past decade. Conversely, Williamson and western Travis have spent most of the last 30 years in GOP hands.

Since the 2011 map took effect, the only Central Texas seat to be contested by both major parties in every election has been HD 136, anchored in Cedar Park; John Bucy's victory over Tony Dale in 2018 (a rematch of 2014) reflected a massive shift of more than 20 points in the Dems' direction over prior cycles. Vikki Goodwin's defeat of Paul Workman in HD 47 – 2018's other defenestration of a GOP incumbent – required a 17-point blue wave.

Running in open seats that Dems didn't even contest in 2016, Round Rock's James Talarico and Driftwood's Erin Zwiener likewise built winning coalitions in 2018, well to the left of where their party had last left those districts. The two remaining Austin-area red seats, held by Lockhart's John Cyrier and Marble Falls' Terry Wilson, likewise had walkovers in 2016 but have now felt a purple ripple; even as more GOP voters turned out in both districts in 2018, the Dems' share of the two-party vote grew from the 2014 baseline.