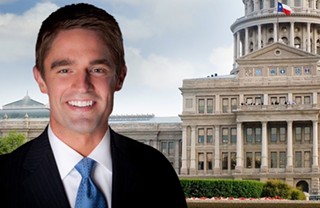 Rep. Jeff Leach, R-Plano, chaired last week's public hearing on HB 896, a no-exceptions abortion ban whose supporters openly relished the prospect of women facing the death penalty, but after the hours-long affair released a statement saying he could "not in good conscience" advance the bill out of committee. Rep. Jessica Farrar, D-Houston, stated the obvious on social media: "Why hear such a bill in the first place? Because the bill's supporters 'needed to be heard'? What happened to leaders who strive to inform the people instead of reacting to and validating misinformation?" Leach co-sponsored a nearly identical bill last session.

"To set the record straight, Chairman Leach is falsely trying to position himself as somehow both a champion for anti-abortion extremists and a champion for women," wrote a coalition of groups including the Texas Freedom Network, NARAL Pro-Choice Texas, the Lilith Fund, and Prog­ress Texas. "It was a stunningly irresponsible decision for the chair of a legislative committee to hear such an extreme bill – especially one he had no intention of allowing to pass." Meanwhile, Leach's HB 16 "born alive" bill, Texas' response to the absurd anti-choice panic over nonexistent "infanticides," passed the full House with a few Democratic votes and many abstentions. "The aim of HB 16 is clear: further stigmatize abortion, misinform the public, intimidate physicians, and interfere with a woman's medical care," said Rep. Donna How­ard, D-Austin, on the floor. "It does absolutely nothing to improve health care. To debate this bill or try to amend it would legitimize its false narrative. As a nurse, I'm insulted by the implication that I or any other nurse or doctor would not do any and everything in our power to care for a distressed human being."

HB 16 now moves to the Senate.