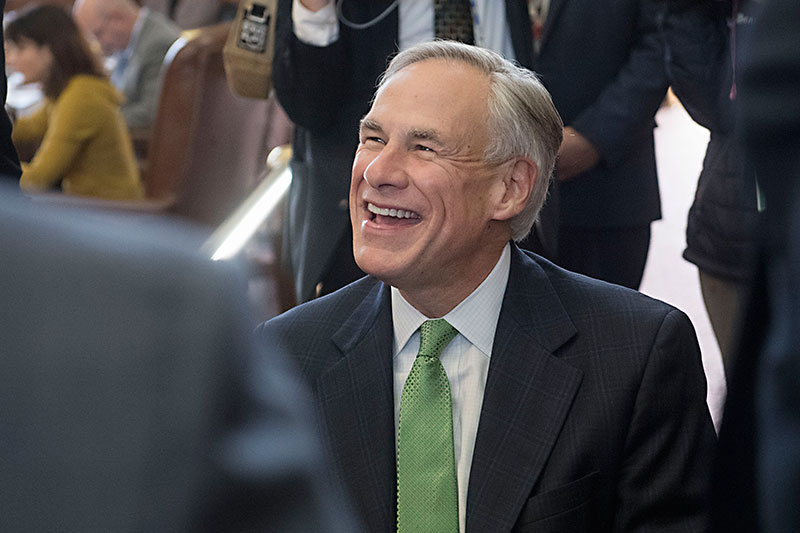 Gov. Abbott applauded the school finance bill, saying it "will have a lasting impact on our education system" and that he looked forward to working with the Senate and Lt. Gov. Dan Patrick on getting HB 3 all the way to his desk. (Photo by John Anderson)

House Bill 3, the session's marquee school finance legislation, survived over three hours of debate on April 3 to be sent onward to the Senate on a nearly unanimous vote. Though the House adopted more than 40 amendments to the "Texas Plan," its broad strokes remain the same: The basic allotment for per-student funding would increase by $890 across the state; school district tax rates would be compressed by 4 cents, which would reduce the recapture payments that have become crippling for wealthier districts, including Austin ISD; and full-day pre-K would be funded for eligible low-income students throughout Texas.

All told, the legislation would inject about $9 billion in new funding into the state's public education system, with another $2.7 billion reserved for lowering local property taxes. The biggest change to HB 3 came in the form of an across-the-board pay raise for all non-administrative staff, for all school districts, proposed by House Democratic Caucus Chair Chris Turner, D-Grand Prairie. The amendment would require school districts to reserve 25% of their new per-student funding for these pay raises; although the exact amount of the raise will vary from district to district, Turner's office said the average increase across the state would be about $1,388.

The pivot toward a blanket pay raise for full-time employees appears to be a bone thrown to the Senate, which has already passed its own bill (Senate Bill 3) that would mandate a $5,000 pay raise for all teachers and librarians. Initially, the House favored letting school districts decide for themselves how to spend new money from the state; Turner sought to strike a balance between both approaches with his amendment, which also provides pay increases to bus drivers, custodians, and other support staff. Moreover, he said, the amendment would allow for a "sustainable way of providing increased compensation to our teachers and other employees," while still letting school districts use most of the new money as they see fit. The amendment "establishes a floor," Turner said at a press conference after HB 3 passed. "But it requires every school district to spend at least 25 percent of its basic allotment increase on pay raises. They can go beyond that if they wish to."

Last week's debate lacked the spark and fury that often arises when the full House tackles major legislation. The bill even won over most of the ultraconservative House Freedom Caucus after Rep. Matt Schaefer, R-Tyler, peppered lead author Dan Huberty, R-Kingwood, over whether HB 3 would do enough to lower property taxes. But, alas, even a bill as beloved as the Texas Plan couldn't win unanimous support: Rep. Jonathan Stickland, R-Bedford, rose to defend the sanctity of summer vacation from HB 3's provision for school districts to, in some cases, extend the length of the school year to provide more instructional time for struggling students – a practice that research has shown to be effective at reducing the "summer slide." Thanks to Sticky's brave stand, HB 3 passed the House with a mere 149-1 vote.

Gov. Greg Abbott, who watched the debate from the House floor, also showed his support for the bill, issuing a statement that passing HB 3 was "a vital step" toward reforming the state's school finance system.

Our Well-Regulated Militia: Speaking of Stickland, the Tarrant County firebrand has put his constitutional carry bill back in its holster after an ardent activist took matters into his own hands. Upon seeing that Stickland's HB 357, which would allow Tex­ans to tote their handguns without securing any kind of state permit, had stalled in the Homeland Security and Public Safety Committee, Chris McNutt, executive director of Lone Star Gun Rights, took to the road to encourage legislators to speed up the process. He showed up at House Speaker Dennis Bonnen's doorstep in Angleton on March 27, where state troopers intercepted him, having already been alerted to his aggressive behavior via social media. (On the other side of the state, McNutt also visited the neighborhoods of Reps. Dustin Bur­rows, R-Lubbock, and Four Price, R-Ama­rillo.) Bonnen called this "gutless intimidation tactics," saying in a statement that "one fringe organization's leader disturbingly traveled over 700 miles in 24 hours just to visit the homes of lawmakers, knowing full well that members were hundreds of miles away in our Capitol while wives and children were alone." Stickland said he was "saddened by the acts of a few individuals that have stolen the conversation about legislation that I deeply care about" before canceling his request for a hearing on the bill.

Sick Leave Bill Splinters: The legislative effort to derail Austin's paid sick leave ordinance has changed form; SB 15 by Sen. Brandon Creighton, R-Conroe, a broad measure that would limit a city's ability to regulate private employment, has been supplanted by four smaller bills, each of which passed the Senate State Affairs Committee last Thursday and most of which take aim at Austin City Council's pro-worker policies. SB 2488 prevents rules that limit an employer from asking about a job applicant's criminal history, a shot at Austin's "ban the box" fair-chance hiring ordinance; SB 2486 bans mandatory scheduling for businesses, such as the city's ordinance that requires construction workers be allowed 10-minute breaks every four hours on the job; SB 2485 prohibits requirements for certain employee benefits like life and dental insurance; and, finally, SB 2487 targets paid sick leave. LGBTQ advocates have voiced concern that the bills could threaten local ordinances that protect (as state law does not) against discrimination based on sexual orientation or gender identity. The suite of anti-worker bills now heads to the full Senate.

Anti-Choice Bills on the Move: On April 8, the Senate pushed through an anti-choice bill requiring doctors to treat babies born alive after "failed" abortions – a redundant measure, as federal law already ensures it. Based on a false narrative that seeks to fan flames of panic over the nonexistent "infanticide" problem, SB 23 (authored by Sen. Lois Kolkhorst, R-Brenham) would punish offending doctors with third-degree felonies, up to 10 years in prison, and civil penalties not less than $10,000. Freshman Sen. Nathan Johnson, D-Dallas, pointed out the rarity of the situation – state law prohibits women from obtaining an abortion after 20 weeks. However, the logic failed to prevail in the upper chamber. "I don't see this bill as truly being aimed at a real problem or a real threat," said Johnson. "I see it aimed at physicians who want to practice their own profession consistent with their own beliefs and the constitutional rights of their patients." The Senate approved the bill 20-10. It now moves to the House.

Later that day, more than 300 people signed up to speak on overtly unconstitutional legislation that would completely ban abortion care, with no exception for rape or incest. Offenders would face criminal homicide charges, punishable by up to a death sentence. The cruel bill saw a marathon hearing at the Judiciary and Civil Juris­pru­dence Committee Monday night, stretching to 3am. Most testifiers – relying on extremist, inflammatory, and religious rhetoric – spoke in favor of HB 896 by Rep. Tony Tinderholt, R-Arlington, often praising the idea of women facing the death penalty for seeking abortion. With Supreme Court precedent against it, the bill appears improbable, but anti-choice advocates hope it ascends to the new conservative majority. HB 896 was left pending in committee.